An unlikely Champions League final of Bayern Munich vs Chelsea is set to be played at the Allianz Arena on May 19th, as the sides have both proved their worth to overcome underdogs tags to make the final. Champions League final tickets are already in short supply with UEFA allocating a major chunk of them to sponsors, but whatever’s left will be immediately bought by supporters of both sides.

After the naming of the Allianz Arena as the venue for the 2011-12 final, all Bayern eyes have been on this campaign, which has been rightly earmarked as a potential opportunity to end their 11-year drought in winning Europe’s top tournament. With the Bundesliga also a priority but now conceded once more to Borussia Dortmund, the chance of becoming European champions has the ability to redeem the club’s season.

The German team were drawn in the ‘group of death’ along with Manchester City, Napoli and Villarreal, but stellar home form saw Die Roten top the pool. A 2-0 win over the Premier League team set the tone for the group, whilst a hard-fought 3-2 victory over Napoli ensured that the Germans would be dominant. Despite losing their final game at the Etihad Stadium once qualification was already ensured, Bayern’s professionalism and quality in the pool must be admired.

After flexing their European muscles in the pool, the knockout stages has been a story of the club’s determination to reach the final. After a 1-0 defeat to Basel in Switzerland in the first leg of the last 16, doubts over Jupp Heycnkes’ men’s credentials were raised and duly squashed with an unprecedented 7-0 triumph in the reverse fixture. The Germans were drawn against an underperforming Marseille in the quarter-finals, and despite the mediocrity of the opponent, a 4-0 aggregate win must be admired.

Real Madrid in the semi-finals was the Bundesliga team’s real test, and over 210 minutes of football and penalty kicks, Bayern proved that they wanted victory more. An attacking outlook in the first game at home had Los Blancos on the back foot, and a plucky last-minute Mario Gomez goal gave them an advantage at half way of the tie. Within 14 minutes of the game at the Santiago Bernabeu fixture the Bavarians found themselves 2-0 down, but the side fought back to 2-1 and eventually won the tie on penalties.

All-in-all, Bayern are a more assured and rounded team than last season, and have had to fight back from difficult positions at times throughout the campaign. In Mario Gomez the side have a forward always liable to pop up with a goal, especially given the quality supply of Franck Ribery and Arjen Robben. The main development from last term however has been a steadying of the backline, with the summer additions of Jerome Boateng and Manuel Neuer now looked like excellent business. Add this all-rounded team to a frightening home record (they have won every game this season at the Allianz Arena) and Bayern will take some stopping.

Chelsea have been two contrasting teams in the Champions League this term; one under Andre Villas Boas and one under Roberto Di Matteo. The Italian has rekindled the side’s belief, and ultimately been the man responsible for getting the west Londoners to the final hurdle.

The Blues topped Group E, comprising Bayer Leverkusen, Valencia and Genk, despite a number of shaky moments. A 2-1 defeat to the Germans at the BayArena and a 0-0 draw with the Belgians away from home failed to inspire, but the English team did win all three home games, scoring 10 unanswered goals in the process.

A last 16 tie with Napoli, Manchester City’s conquerors, promised to be an exciting match-up and did not disappoint. After being thoroughly outplayed and beaten 3-1 at San Paolo, Villas Boas was replaced by Di Matteo, whose side staged a remarkable and unlikely comeback to beat the Italians 4-1 at Stamford Bridge in the return leg. This was undoubtedly the turning point of the Blues’ season, and the springboard that sees them in the final.

A potential banana-skin tie awaited Chelsea in the quarter-finals, as Benfica, who progressed through their group at the expense of Manchester United, would prove no pushovers. However, an assured performance at the Estadio da Luz saw a 1-0 win for the Premier League outfit, who huffed and puffed to win the return fixture 2-1 also. Brave team selection in the away leg by Di Matteo reaped benefits, and set up a semi-final with Barcelona.

Chelsea had unfinished business against the Catalan giants after previous close calls, and over 180 minutes rode their luck but ultimately did what it took to make the final. Despite being outplayed in the first leg, a 1-0 victory courtesy of a solitary Didier Drogba strike gave the Blues the slimmest of advantages to take to Camp Nou. After 44 minutes of the second leg Chelsea were staring down the barrel: trailing 2-0 and down to ten men after John Terry’s dismissal. However, a deft Ramires chip, stern defensive effort and last-gasp Fernando Torres strike offered up a memorable night for the travelling support.

Over the course of the campaign it is difficult to pick out individuals who have inspired their team to progression, as the upturn in fortunes must be accredited to a collective team effort. Undoubtedly Chelsea’s senior players have led this, and Didier Drogba, out of contract in the summer and facing an exit from the club, must get credit for his goals and leading from the front. Di Matteo’s tactics and man management must also be heralded, and the Italian must surely be given a permanent place on the Stamford Bridge hotseat should his team defeat Bayern in the final.

At times with more grit than guile, Bayern and Chelsea deserve their places in what should be a blood and thunder final. The Bavarians have an exemplary home record, but on current form, if anyone can beat them at the Allianz Arena it may well be the west London outfit.

If you’re looking to see the Champions League final live, you should visit TicketBis, an online tickets exchange that specialises in helping football fans buy and sell tickets online for just about any game in Europe. 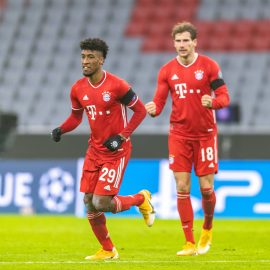