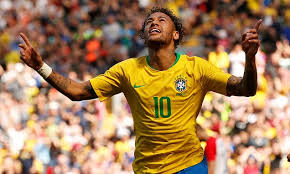 The international friendlies continue to be played in the lead-up to the 2018 World Cup in Russia, with some of the competition favourites in action on Sunday night.

Both Spain and Brazil fielded strong sides in their latest games, with Neymar making quite the statement at Anfield.

Meanwhile, Nicklas Bendtner will not be at the World Cup after the former Arsenal joke figure was omitted from Denmark’s 23-man squad.

After an excellent South American qualifying campaign, Brazil are many people’s favourites to win the World Cup – and the Selecao made it ten games unbeaten after a 2-0 win over Croatia at Anfield.

The major talking point came on the 68-minute mark, with Neymar scoring an incredible individual goal to break the deadlock and quell any concerns he will not be fit for the competition in Russia.

The PSG superstar has been fighting to recover from a foot complaint and was introduced in the second-half against Croatia, with a stunning goal showing the blistering attacker has recovered from a metatarsal injury.

Brazil coach Tite fielded a full-strength side, with Manchester City defender Danilo taking the place of the injured Dani Alves at right-back.

Spain are also fancied by many to lift the World Cup in Russia, but the 2010 champions were held to a 1-1 draw by Switzerland on Sunday night.

Spain dominated possession in the clash as per usual, but could not find the winner, despite having Diego Costa lead the line for them.

Bendtner left out by Denmark

While the World Cup will have some of the planet’s best players on show later this month, one ‘star’ name with a high opinion of himself will have to watch on from the sidelines.

Denmark have confirmed their 23-man squad for the competition and have left out Nicklas Bendtner after the centre forward failed to recover from injury.

The ex-Arsenal striker has been struggling with a groin strain and was fighting to be fit enough to feature this summer, but Danish coach Age Hareide announced on Sunday night that the attacker had lost the race.

Bendtner, who has scored 30 international goals despite an inconsistent club career, will likely be replaced in the Denmark attack by either Nicolai Jorgensen or Andreas Cornelius.

Who is your money onto win the World Cup? Join the Sportslens World Cup predictor here