Germany proved why they’re the best side in the world with an utterly dominant display in a 3-0 win over Slovakia in the last 16 of the European Championships on Sunday. The World Champions produced arguably the most complete performance of the tournament so far, and goals from Jerome Boateng, Mario Gomez and Julian Draxler ensured their safe passage through to the quarter-finals, where they will face off against either Spain or Italy. Mesut Ozil missed a penalty in the first half, but that didn’t come back to bite them in the end.

Joachim Low decided to start Draxler ahead of Mario Gotze for this one, and the Wolfsburg man, who has recently emerged as a summer target for Manchester United, completely justified his selection. The 22 year-old delved into his bag of tricks right from the start, and won a foul on the right in the 8th minute. The free-kick led to a corner, which led to Germany’s opener. Toni Kroos’ delivery was headed away, but an incoming Boateng sweetly struck a low volley which took a slight deflection before perching into the bottom corner. This was the centre-back’s first goal for his country, in his 63rd cap. 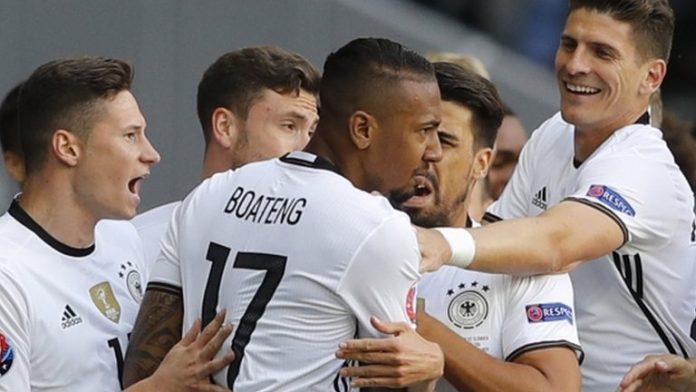 Germany were looking ominous every time they went forward, and the writing seemed on the wall 6 minutes later when they won a penalty. Martin Skrtel pulled Mario Gomez’s shirt in the box, and the referee had no hesitation in pointing to the spot. Ozil though, shot at a comfortable height for Matus Kozacik, who guessed right and palmed the Arsenal man’s attempt away.

The three-time Euro winners though, weren’t deterred and continued going forward with menace. A lot of their threat was coming down the left, with left back Jonas Hector being a constant thorn in the Slovakian defence with his marauding runs. Thomas Muller forced a save from Kozacik with a curling effort, before mistiming a header from close range.

In their last group game against Northern Ireland, Germany squandered a whole host of chances and ended up only winning 1-0. They went unpunished that day, but Slovakia almost made them pay for their missed opportunities on the stroke of half-time. Peter Pekarik’s cross from the right was met by Juraj Kucka, who forced a fantastic save from Manuel Neuer. The goalkeeper had had nothing to do thus far, but went full-stretch to palm over the ball that seemed headed for the top corner.

Instead, Germany proved their class by going at the other end and doubling their lead just two minutes later. Draxler got past his man on the left with a brilliant bit of trickery before laying the ball on a plate for Gomez, who tapped in for his second goal of the tournament.

Slovakia seemed to offer a bit more at the start of the second half, but didn’t test Neuer. Their talismanic playmaker Marek Hamsik was expertly nullified by Sami Khedira, while Phillip Lahm’s successor at right-back Joshua Kimmich was doing a stellar job on Vladimir Weiss.

Any slim hopes of a comeback were extinguished in the 63rd minute, when man-of-the-match Draxler grabbed his 2nd international goal. A corner found its way to the back-post, where the 22 year-old was on hand to expertly meet a high ball with a volley into the top corner.

Bastian Schweinsteiger came on late in the game to equal Lothar Matthaus’ record of 36 games in all competitions.

Germany are looking very much like the team to beat, and it will take something really special to stop them from following up on their World Cup win in Brazil two years ago with another major trophy here in France. They now await the winner of the Italy vs Spain clash to be played tomorrow.