Real Madrid winger Gareth Bale is closing in on a return to Tottenham Hotspur seven years after he swapped North London for Spain.

The Wales international could be announced tomorrow as a Spurs player from the look of things, and his arrival will surely see reduced playing minutes for some of the club’s attackers.

England international midfielder Dele Alli has already been linked with an exit after he was left out of the squad for today’s Europa League qualifying match against Lokomotiv Plovdiv, and he was reportedly mentioned in discussions between Spurs and Madrid over the deals to sign Bale and left-back Sergio Reguilon.

The Welsh star will be a starter for Tottenham as long as he is fit, and Alli may have to do with a place on the bench in the imminent shake-up.

The 24-year-old has reacted by liking a post on Twitter predicting that he will no longer be in the starting XI after Bale’s arrival.

With the signings of Gareth Bale and Sergio Reguilon close to completion who would make your Spurs starting XI? We’ll start… 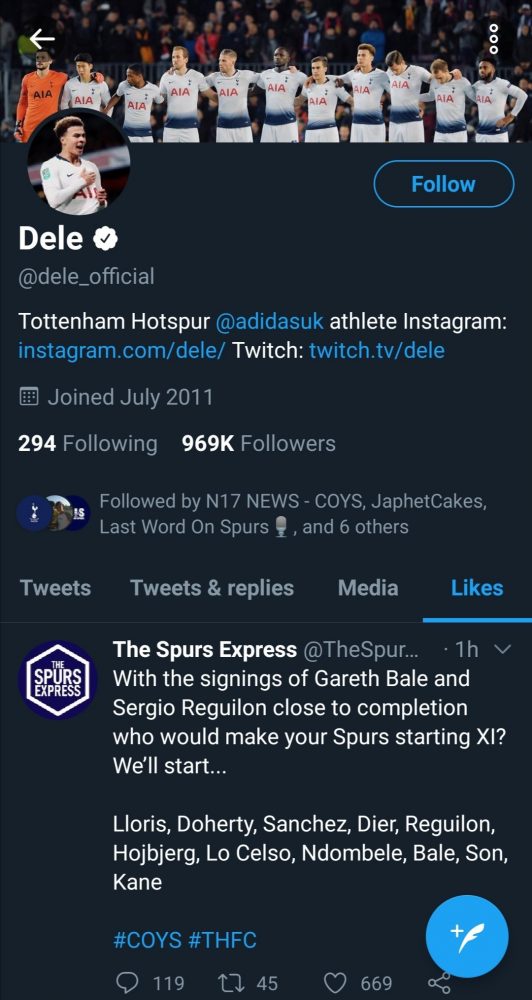 The four-time Champions League winner can play on both wings and as an attacking midfielder behind the striker, and his arrival could be bad news for Alli.

The Spurs star has seen his standard drop in recent seasons and has struggled to convince boss Jose Mourinho since the Portuguese’s arrival.

He was withdrawn at half-time against Everton on Sunday, and things could get harder in the coming weeks.