In this third and final part of my look at some of the finest players to have ever been produced by football’s most successful nation, I focus on players who reached their peak during the 1990s and 2000s.

Brazilian successes in both the 1994 and 2002 World Cups have ensured that this era is rich with talent from which to add to this select list. Once again, if you think I’ve been too kind on some players or have made some glaring omissions then let me know, everyone’s opinion is welcome.

Brazil’s most capped goalkeeper in history, Taffarel was a pivotal figure in his country’s World Cup campaigns of 1990, 1994 and 1998. A calming, assured presence between the sticks, Taffarel was also noted as a penalty-saving expert, proving his worth against Italy in the 1994 final and in the 1998 semi-final shootout against the Netherlands.

At club level, some of Taffarel’s finest performances came whilst playing for Turkish outfit Galatassaray. The ‘keeper was integral to the club’s triumphant UEFA Cup campaign in the 1999-2000 season making strings of fantastic saves, one of the best coming in the final when he superbly kept out a point-blank Thierry Henry header. Taffarel retired in 2003 and is fondly remembered as an unflappable, technically gifted goalkeeper and a kind and modest man both on and off the field.

Zany, insane, bizarre and erratic are all adjectives that can be used to describe Romario, but, despite all the mischievous off-field antics, Romario’s greatness cannot be denied. One of the most prolific strikers the game has ever seen, Romario was at his breathtaking best for Brazil during the mid-90s. 1994, the year Brazil reclaimed the World Cup after 24 long years, was arguably the striker’s finest ever season. Spearheading Barcelona’s fearsome frontline, Romario won the Pichichi (Spain’s Golden Boot) with 30 goals before firing Brazil to the top of the world with 5 goals in 7 games and being named World Player of the Year in the process.

Wherever he played Romario scored goals and won trophies almost effortlessly. The 98 goals he scored for PSV Eindhoven in just 109 appearances fired the Dutch side to three league titles during his time there, 34 goals in 46 Barcelona appearances having a similar effect on the Catalan side. The striker recently claimed to have scored the 1,000th goal of his career and, if his claims are to be believed, then he is one of a very select band of players to have reached the landmark, a statistic befitting his incredible talent for putting a football in the back of a net.

With 142 international appearances to his name Cafu, an exuberant and reliable right back, is the most capped player in Brazil’s history. If one player encapsulates Brazil’s modern successes then it is Cafu, a World Cup winner in 1994 and a World Cup winning captain in 2002.

Along with being one of the most successful Brazilians of all time on the international stage, Cafu also enjoyed a trophy-laden career in Europe, picking up plenty of silverware during spells with both Roma and Milan. His pacy, attacking nature in combination with a solid defensive awareness made Cafu the model of the modern wing back, a quasi-winger with the speed and ability not to be caught out of position on the counter-attack. It is that blueprint for the ultra-modern defender which will be Cafu’s legacy and his lasting contribution to the game.

Currently installed as manager of the national side, Dunga first made his name as an adept midfield anchorman, making his debut for Brazil in 1982 as a physical, tough-tackling terrier in the middle of the park.

During the first half of his international career Dunga found himself vilified by the Brazilian public for his supposedly brutal, unglamorous style of play. The 1990 World Cup in Italy was a disaster for Brazil, the team being criticised for their rigid and lumbering displays. No player encapsulated this style more than Dunga and he was widely lambasted for the nature of his play. However, Dunga continued to mature as a player and eventually grew to be the heartbeat of his team, giving Brazil extra protection at the back and also facilitating a quick, counter-attacking game.

By the time the 1994 World Cup came around, Dunga had risen to such prominence in the Brazil side that when Rai, the captain, was dropped after some poor early performances, Dunga was handed the armband. Brazil went on to win the tournament and Dunga had the honour of holding aloft his country’s first World Cup since 1970. The Brazilian public will desperately hoping that he can lead the current crop to similar success as manager next summer.

Alongside Romario in the 1994 World Cup, Bebeto was one half of the world’s most potent strike force. The Salvador-born striker scored three goals during Brazil’s march to the title in the USA, establishing himself as one of the best strikers in world football and inventing the now famous (and possibly over-used) “rock the baby” celebration in the process.

At club level Bebeto was quite the journeyman, representing ten teams during his career, his most successful spell coming in the early 1990s with Deportivo La Coruna where he scored 86 goals in just four prolific seasons. It was this sort of form that served the striker so well during both the ’94 and ’98 World Cups when he produced his best form for the national team, becoming a Brazilian legend (although not necessarily recognised as a world class talent) in the process.

Since his international debut at the start of the new millennium, Lucio has been widely regarded as the finest Brazilian central defender of his generation. An imperious, dynamic defender with immense ability in the air, Lucio is a talismanic presence in both the Bayern Munich and Brazil back lines and looks set to lead his country during their forthcoming World Cup campaign in South Africa next summer. His performances in the centre of defence in combination with his patently strong leadership qualities will be key if his team is to succeed and lift the World Cup for the sixth time in Brazil’s history next year. 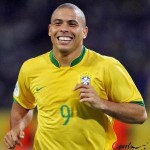 Despite recent struggles with fitness, form and weight, no football fan could ever forget the sheer brilliance of Ronaldo who was far and away the world’s best striker from around 1994 until injuries and personal problems began to catch up with him towards the end of his spell with Real Madrid in 2007.

Ronaldo burst on to the scene with PSV in the mid-nineties, demonstrating his incredible turn of pace and finishing ability with 42 goals in just 45 first team appearances. His form soon got him a move to Barcelona where he was equally as lethal in front of goal, firing a hugely impressive 47 goals in 37 games at Camp Nou. Spells at Inter Milan and as a galactico at Real Madrid proved equally as fruitful, but it is for his peerless performances for Brazil during World Cups for which he is most famous.

During France ‘98, where Brazil (and Ronaldo personally) came up agonisingly short in the final, the striker scored four goals and laid on three assists, emphasising his place at the very top of the world game. Four years later Ronaldo provided further evidence of his brilliance, scoring eight goals in Japan and South Korea to fire his country to World Cup glory. In 2006, Ronaldo became the top scorer in World Cup history with three goals in the tournament, strikes which took him past the great Gerd Muller’s original record of 14 goals in World Cup fixtures.

Since the conclusion of the 2006 tournament Ronaldo’s form has dipped in conjunction with a serious fall in his levels of fitness. A move to Milan did little to improve his fortunes and he was unceremoniously dropped from the national team by his former teammate Dunga. Having recently joined Corinthians, Ronaldo is seeking to reinvigorate his career back in his homeland and, if he can return to full fitness and goalscoring form, then this great player, one of the best strikers in history, could well be in contention for his fourth appearance in a World Cup finals next summer.

Ronaldinho is surely the most technically gifted Brazilian of his generation with a ball at his feet. Since he entered into the European footballing consciousness as a precocious 21 year-old at Paris St Germain, Ronaldinho has been thrilling audiences worldwide with his playmaking abilities and incredible array of skills.

Ronaldinho’s transfer to Barcelona after his superlative performances at the 2002 World Cup saw him establish himself as undoubtedly the best player on the planet, a position endorsed by his winning of the 2005 FIFA World Player of the Year award. His technical innovation and ability to beat defenders with an almost effortless swagger made him one of the most electrifying players ever seen, a reputation that, despite recent issues with fitness and motivation, he still holds.

Still only 29 years-old, Ronaldinho has already made 87 appearances for Brazil and must be in line to finish his career as one of his country’s most capped players. His performance during the 2002 World Cup was superb, the highlight being his lobbing of David Seaman from 30 yards with a free-kick which he still claims was deliberate. In 2006 he was less influential as Brazil crashed out in the quarter-finals, but he remains an important presence in Dunga’s team and will be looking to revive his best form for the forthcoming tournament in South Africa.

As a player Roberto Carlos is completely unique. A dynamic powerhouse of a left back, Carlos looks more suited to the rugby scrum than the football field, but his robust style of play has proved to be highly effective at all levels of football.

During his eleven year spell at Real Madrid, Carlos grew into probably the best full back in the world, combining skill, power, strength and raw pace to devastating effect, providing an added dimension to any defence of which he was a part. He is also famed for his set-piece ability, a reputation built largely upon the back of an viciously swerving free-kick against France in the 1997 Tournoi, an element of his game which characterised the peerless force and intensity with which he plays football.

Carlos retired from international football in 2006 with 125 caps to his name, leaving an impressive legacy with the Brazilian national team and a void in the defence which is only just beginning to be filled thanks to the emergence of another Brazilian import to Real Madrid Marcelo.

Kaka, now one of the leading lights in Madrid’s second galactico era, has only been a professional footballer for eight years, but is already thought to be the best player of his generation. An elegant, adroit attacking midfielder, Kaka has delighted football fans across the world with intelligent, graceful displays for Milan and Brazil over the last six seasons.

During his last few seasons with Milan, it seemed that Kaka’s form was inextricably linked with the club’s on-field fortunes. When the Italian side won the Champions League in 2007 Kaka was pivotal, his inspirational displays were key in driving the Rossoneri on to success, a contribution that was recognised when he was awarded the Ballon d’Or and World Player of the Year that same season.

Kaka, who is without doubt Brazil’s finest current player, will be absolutely pivotal if the Selecao are to triumph next year in South Africa. If they do win the competition then Kaka will surely become, if he isn’t already, a Brazilian legend and enhance his credentials as one of the best, most graceful players football has ever seen.