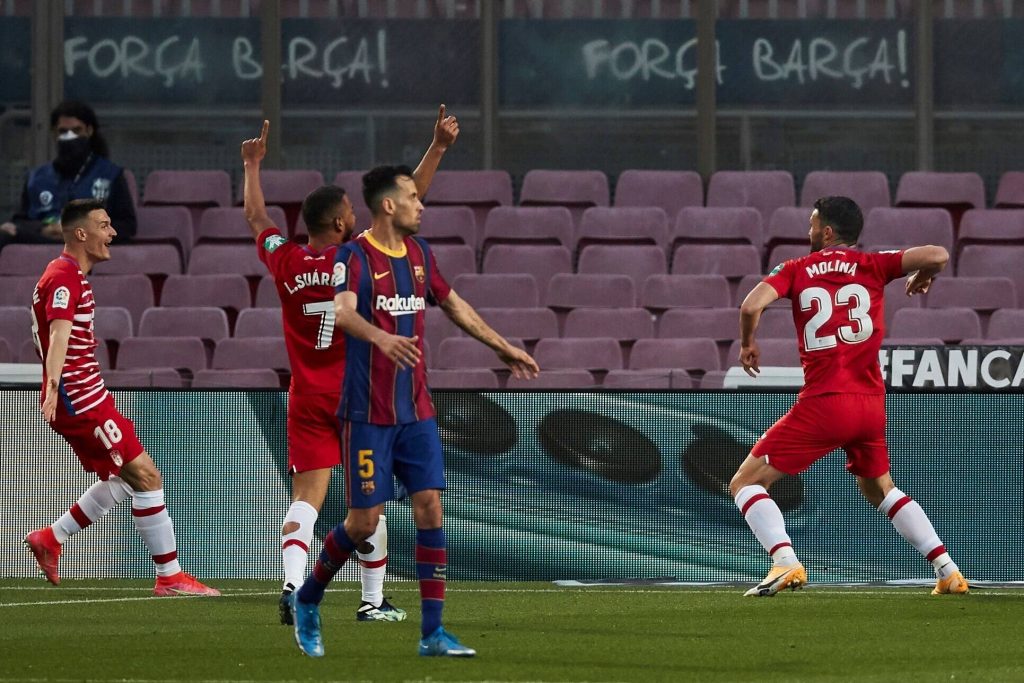 The La Liga title race took another huge twist as Granada came from behind to win at Camp Nou on Thursday.

Barcelona dominated the early stages, with Antoine Griezmann providing the threat. The World Cup winner combined with Frenkie de Jong down the right, but the Dutchman’s cutback was cleared. Griezmann then had a go himself but saw his low shot saved.

The home side eventually made their dominance pay off, and Griezmann was once again involved. Lionel Messi played a one-two with the Frenchman before firing into the far corner for his 26th league goal of the season.

Not long afterwards, the Argentine had the opportunity to add number 27 to his tally after being played clean through on goal by Sergio Busquets, but his effort was poked around the post by the right foot of Aaron Escandell.

Granada provided very little threat to the home side’s goal in the first half. The closest they came was when Darwin Machis dragged his shot wide from the edge of the box.

The second half began in the same vein. Griezmann fired wide from Ilaix Moriba’s cut back, while Sergi Roberto volleyed over. They continued to press but were unable to find the second goal.

And this came back to bite them in the 63rd minute. Oscar Mingueza was unable to cut out Luis Suarez’s pass, which fell to Machis. The Venezuelan burst through on goal and clinically finished through the legs of Marc-Andre ter Stegen.

This visibly frustrated the hosts, with manager Ronald Koeman being sent to the stands after some presumably harsh words towards the officials. La Blaugrana lost their rhythm, failing to find an opening.

Meanwhile, Granada punished them with a devastating second goal. Adrian Marin swung in a peach of a cross for veteran striker Jorge Molina. The 39-year-old’s flicked header found the far corner, putting the visitors into a surprising lead with ten minutes remaining.

And this is how it ended. Barcelona tried to find an equaliser but were unable to break down a stubborn backline.

The defeat takes the title race back out of Barcelona’s hands. They will now be hoping that Real Madrid slip up in their remaining five games. Granada remain in eighth, five points off a Europa League spot.

Man of the Match – German Sanchez

For the opening hour, the main candidates for MOTM all came from the home side. Messi was sharp as ever, Griezmann was threatening, and Busquets was running the show.

For the final 30 minutes, however, it was a battling performance from the away side’s backline, and German Sanchez was at the heart of it.

The Spaniard was winning every header, clearing every cross, and making several tackles to repel wave after wave of pressure from the Catalan giants, ensuring that they did not find a way back into the game.

He even made one exceptional tackle to stop Messi in his tracks when the forward was breaking into the box.

A game to remember for the 34-year-old.

Barcelona’s worst result of the season?

In recent years, Barcelona have earned a reputation for bottling it. Throwing away three-goal leads against Roma and Liverpool, humiliation at the hands of Bayern Munich and Paris Saint-Germain – it’s not been a great few years for the La Liga side.

This season, things seemed to be going somewhat in the opposite direction. They had pulled off two great comebacks in their run to the Copa del Rey trophy and had recovered a 12-point deficit to put the title race in their own hands.

Today, it was the same old story. 1-0 up, seemingly in control, up against the side with the worst defensive record in the division, who have almost nothing left to play for. Easy you would think.

But no. They snatched defeat from the jaws of victory, conceding two fairly soft goals. Granada had two shots on target and converted them both.

Even a draw would have kept them in the driving seat. It wouldn’t have been ideal, but they would have had the upper hand over their competitors.

With the loss, they now rely on other results. Even if they win all of their remaining games, they will have to hope that Real Madrid drop points somewhere along the way.

They’ve had more humiliating results this season. The defeat against Cadiz in the league, the Super Cup final loss to Athletic Bilbao, the two El Clasico losses, the battering they suffered at home to PSG.

However, this is potentially the one that will hurt the most. All of the excellent football that they’ve played in 2021 could all go down the drain due to this game. The pressure was on them, and they choked.

If it’s any consolation, it’s another twist in an enthralling title race.