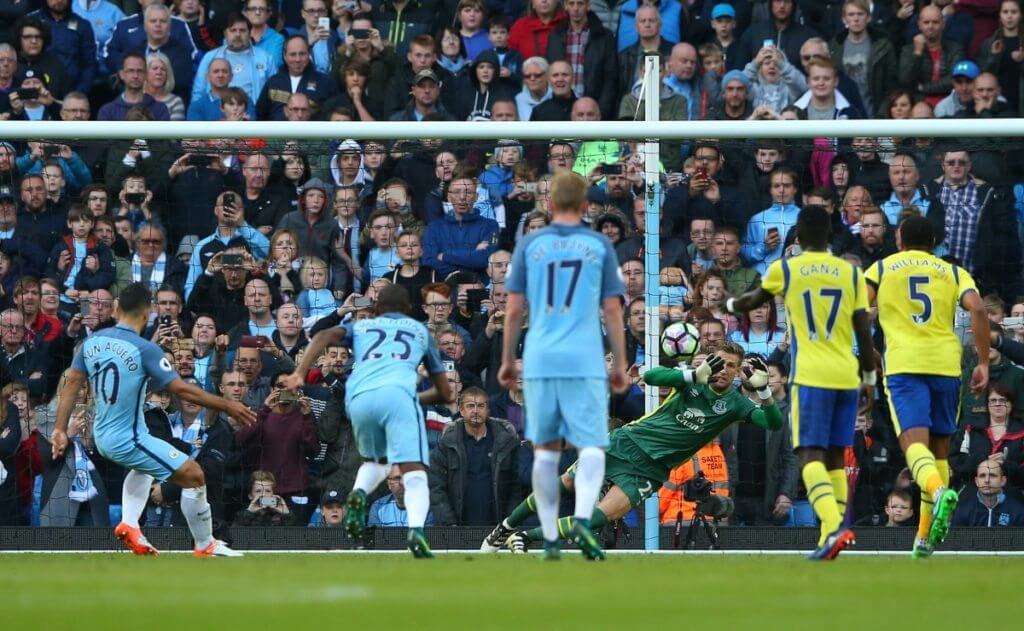 The plot seemingly continues to thicken in the Premier League. Frontrunners Manchester City dropped their first home Premier League points of the season with a 1-1 draw against Everton, while unbeaten Tottenham came away from West Brom with the same scoreline.

Liverpool played out a dreadful 0- draw with Manchester United and Chelsea seemed to be back to their best with a 3-0 win over champions Leicester City, while it seems a long time since Hull City’s impressive early season form, as they got battered 6-1 at Bournemouth. These are the 11 players who performed best on matchday 8.

It was a fantastic performance from a man who has been heavily criticised in his country for his performance for the national team against France last week. Not only did he make two incredible penalty saves, but he made a string of excellent stops to keep the score at 1-1.

It’s been a tough season for West Ham so far this season. They still don’t look like they’ve got used to the London Stadium, and have been leaking goals, but it was a different story on Saturday evening. Reid was consistently strong throughout the match at Selhurst Park, and dealt excellently with Crystal Palace’s Christian Benteke.

I was one of the many who were very surprised by Chelsea’s decision to re-sign David Luiz from PSG in the summer. The Brazilian has always looked like such a rash defender, but since his return to Stamford Bridge, Luiz has been Chelsea’s best defender, and he was excellent in dealing with Leicester’s Jamie Vardy on Saturday afternoon.

Cresswell has been a big miss this season for West Ham because of injury, and he showed just how important he was to them in the victory over Crystal Palace. He was dangerous going forward, setting up Manuel Lanzini to score the winner, and strong going the other way. It was a dreadful piece of refereeing that saw him sent off late on in the second half.

Bournemouth started with nine English players on the pitch against Hull City this weekend, but Stanislas was the most impressive. He was a constant threat, scoring twice, and set up two others as he continued his impressive early season form.

Kante was undoubtedly among the top players in the Premier League this season, and he was the best player on the pitch when he came up against his former club at the weekend. The Frenchman ran the show in the middle of midfield, and showed just what Leicester were missing as his new side came out 3-0 winners.

Who’d have thought that Joe Allen could have been such a prolific goalscorer? The Welshman has found a new lease of life at Stoke, and netted twice against Sunderland, and almost added a third, to help take the Potters out of the relegation zone.

It seems that every week we seem to be discussing the form of Eden Hazard. This week the Belgian looked more like the player who won the PFA Player of the Year award in the 2014/15 season, and he is certainly making the most of a new role behind Diego Costa in Antonio Conte’s 3-4-3 formation.

It looks like only a matter of time until Wilson is given a call-up to the England squad. He has started the season very well and scored again as Bournemouth dismantled Hull at the Vitality Stadium.

Southampton’s £4 million purchase of Austin from QPR in January is looking like an even shrewder purchase with every passing week. He was at the double for the Saints against his former club Burnley, the first of which a typical poacher’s finish, the second a calmly taken penalty.

You would have thought it was a different man who turned out for England last week. Walcott has never looked so natural in an Arsenal shirt and he was the best player on the park during their match with Swansea, scoring twice, although he should certainly have added to that tally in the closing minutes.