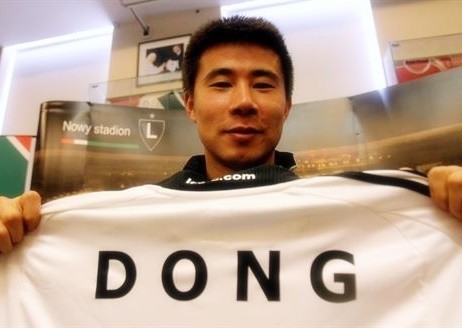 When ex-Manchester United striker Dong Fangzhuo left Legia Warsaw on August 1, a brief yet beautiful piece of football symmetry disappeared with him. The first Chinese player in Poland may have featured in only six games in just over five months – and failed to find the net in any of them – but in doing so he formed one half of an equation so perfect that his failure to make any impression in a league currently ranked 26th in Europe seems rather irrelevant.

Dong, 25, arrived at Legia in late January and traveled to the club’s training camps in Spain and Cyprus. After scoring three times in seven friendly games, he signed an 18-month contract on February 23rd with an option for two further years.

Legia management enthused about a player for whom Sir Alex Ferguson was once prepared to pay Dalian Shide £3.5 million (although only £500,000 actually changed hands), with sporting director Miroslaw Trzeciak describing Dong as ”a quality striker who will play a big part in our chase for the league title”. One visitor to the Legia website was even more inspired, writing that the news was like ”cookies falling from the sky”.

In hindsight, however, there were already signs that Dong’s stay in Poland would prove as frustrating as his time in Manchester. Behind the scenes, coach Jan Urban apparently took some convincing that the player was right for Legia. Similarly, whilst the fans were on the whole cautiously positive about the move, mutterings were still heard that Legia were in more urgent need of a defensive midfielder than another striker.

The fact that Dong then failed to appear in what was supposed to be his debut against Cracovia on February 26th did little to reassure the skeptics. Wearing the number 14 shirt, he finally made his first appearance for Legia on March 13th as a 69th-minute substitute against Polonia Bytom before starting the next match against Śląsk Wrocław. And apart from two further games apiece in the reserves and the Polish Cup, that was that for Dong at Legia.

But it doesn’t matter. Here’s the beautiful part – just as the previously-hyped Chinese footballer was attempting to rebuild his career in Poland, the once-hotly tipped Polish player was doing the same thing in China. As luck would have it, with rather more success, too.

Dong Fangzhuo can only hope that his road to redemption takes fewer twists and turns than that of Emmanuel Olisadebe. One of the very few Polish citizens born in the Nigerian city of Warri, the 18 year-old Olisadebe signed for Polonia Warsaw in 1997, and supplied the firepower which three years later propelled the club to a first league title in 56 years.

The key figure, not just in the triumph of 2000, but in what would be a remarkable integration of the young Nigerian to a fundamentally alien culture, was Polonia coach Jerzy Engel. Having seen something in Olisadebe which both Wisła Kraków and Ruch Chorzów had missed during the striker’s earlier, unsuccessful trials with Polonia’s league rivals, Engel had not only made him the attacking focal point of his team, but also conceived the outline of a larger, considerably more ambitious plan.

Recently named national coach and chastened by Poland’s failure to reach the 2000 European Championship finals, Engel decided to make Olisabede – scorer of twelve goals in Polonia’s title-winning season – the first African-born player to represent Poland. As it turned out, convincing the football-mad President Alexander Kwaśniewski to waive the regulations about residency and language proficiency and fast-track Olisadebe’s Polish citizenship proved easier than persuading the player himself.

Olisadebe has always had a complex relationship with his adopted homeland. Gratitude for the country in which he launched his career and met his future wife (in Pizza Hut on Ulica Marszałkowska, no less), along with a deep bond with Engel (whose son would serve as Olisadebe’s best man at his wedding in Warsaw’s old town in 2001), was mixed with a struggle to truly belong in a country of 98% ethnic Poles, a minority of whom subjected him to racist abuse both on and off the pitch. 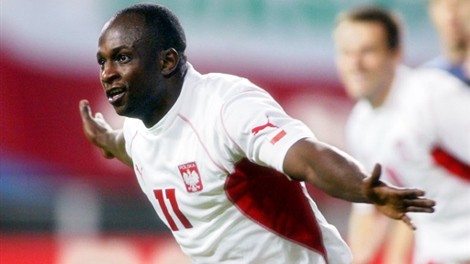 In the end, however, Olisadebe decided for Poland – admitting that ”I don’t know what gave me the strength to go through with this” – and once in the national shirt there was little sign of any indecisiveness. He scored on his debut against Romania in Bucharest in August 2000 and never looked back, finding the net seven times in his first nine games. With the fiasco of Euro 2000 a distant memory, Poland became the first European nation to qualify for the World Cup in 2002, ending 26 years in the international wilderness.

Emmanuel Olisabebe was a hot commodity. Voted the 29th-best player in the world by FIFA in 2001, he finalised a move to Greek giants Panathinaikos for $1.7 million – over ten times the amount Polonia had paid to Nigerian club Jasper United in 1997 – and cashed in further on his newly-found superstar status by featuring in an eye-catching series of advertisements for vacuum cleaners.

The next two years would be the peak of his career. Olisabebe played in every game at the World Cup, scoring Poland’s fastest-ever goal in the tournament after three minutes against the United States. With Panathinaikos, meanwhile, he won the domestic double and played in the Champions League.

However, the success came at a price. Olisadebe was increasingly troubled by knee injury, and rumours circulated back in Poland that he was being forced to play on painkilling injections by Panathinaikos management who were unwilling to pay for surgery. Absent from the side all too often, Olisadebe lost his place and drifted down the pecking order before leaving Greece at the start of 2006.

Thus began Olisadebe’s Dong Fangzhuo period. Despite knees as fragile as the club’s grasp of basic accounting principles, he signed for Harry Redknapp’s Portsmouth. Two games and no goals later, he returned to Greece for a short spell with Skoda Xanthi – where, appropriately enough, he never really got started – before pitching up in Cyprus with top-flight new boys APOP Kinyras Peyias.

And then it happened. A move to Henan Construction in Zhengzhou in 2008, superficially an admission that Olisadebe’s career – much like the player himself – was on its last legs, instead turned out to be inspired. Runner-up in the China Super League scoring charts in his first season with 12 goals in 26 games, he was nominated as the league’s second most valuable player and, in a curious echo of a previous life, was awarded citizenship of Zhengzhou.

Emmanuel Olisadebe is still in China, where despite yet another knee injury which saw him miss out on this season’s Asian Champions League, he was once again named as the second-best player in the league. Recent interviews have seen him express a wish to play for two more seasons with Henan before going into coaching. It’s probably fair to suggest that he could pass on a thing or two.

Olisadebe’s Zhengzhou lies just over 500 miles from Dalian, where a young Dong Fangzhuo – now starting all over again at newly-promoted Portuguese side Portimonense – once honed the skills which saw him hailed as the first Chinese football superstar.

Amongst the myriad attractions of the city is one of China’s oldest Confucian temples. Harmony and balance play a key role in the Confucian vision, and the brief overlap of the Pole in China and the Chinese in Poland, each attempting to achieve the same thing, appears as a captivating and hidden piece of symmetry worthy of the surroundings. Sometimes football is really beautiful.