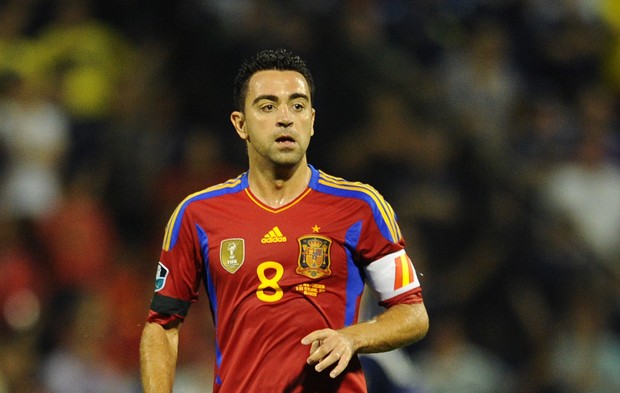 If you where to take a casual stroll past one of the many Plaza’s that you could come upon in any one of the Spanish cities, or towns across the length and breadth of the nation. You would no doubt find a group of small children, set upon an impromptu football match in said Local Square.

The children, would most likely be wearing a (somewhat) diverse array of footballing apparel, Madrid, Barcelona, some perhaps wearing the colours of La Roja, and whilst the names on the back of their shirts (should they have them) may say differently, and consciously they may not acquiesce, all the children have one thing in common: they all want to be Xavi Hernandez.

Xavi Hernandez, of course is more of a metaphor in this context. The title could quite easily have been “Everyone wants to be Andres Iniesta, or Koke Resureccion, David Silva even. if you where from the north-west of Spain it would be Juan Carlos Valeron.

In essence the children are seeking to emulate the team’s footballing fulcrum, the equivalent to an American football Quarterback.

In a generation where La Liga and the Spanish National team have both seen unparalleled sporting success, and bared witness to two of the games greatest ever players in Lionel Messi & Cristiano Ronaldo.

It is refreshing to know that the upcoming generations, perhaps influenced by Luis Aragones’ Tiki-Taka footballing legacy, want more. They don’t just want to score the tap in from five yards out, they want to pick a pass with the outside of their boot, play a one-two with a teammate, maybe even throw in a back-heel, or nutmeg for good measure.

It is this innocence of youth, and their avaricious attitude for the beauty within the game that indeed bodes well for the future Spanish generations.

Real Madrid’s Isco Alarcon, Thiago Alcantara at Bayern Munich, the afore mentioned Koke at Atletico, even those below them in the form of Juan Dominguez (Deportivo), Rafinha Alcantara (Celta), Marco Asensio (Mallorca) or Oliver Torres (currently Villareal), all dispel the fallacious notion that Spain could be on the verge of a creative talent desiccation.

The players are there, sure Xavi’s legacy is an imposing one, but his boots will not fail to be filled due to a talent shortfall. In fact the single biggest problem Spain, Spanish football, and perhaps by extension world football will face, is the one being created by sections of the media obsessed with the dissection, post-mortem and consequent unfavourable obituary of what they have encompassed under the ideology of Tiki-Taka football.

These enlightened footballing visionaries, have (once again) determined that playing offensive football, where ones team takes the initiative, and looks to be assertive, attack and dominate, is now dead. They would have you believe that entertainment is actually an antonym of success!

So why bother to entertain when the result is the only thing that matters? Fortunately the children in the Spanish Plaza’s still show some insight in to the answer to this question. They provide a mirror into that childhood soul that reminds us that, within every football player, coach, fan and even journalist alike. There is that desire to be applauded, the desire to elate both oneself, and those around you. It is precisely this essence, that has greatly contributed in making the game such a globally celebrated phenomenon for centuries upon end.

Worryingly, football in recent years has begun to slip into somewhat of a generalised malaise. Pep Guardiola’s Barcelona, Luis Aragones’ and Vicente Del Bosque’s Spanish sides amongst others, have given the Spanish public and followers of La Liga an ideal with which to gravitate upon, now all we, those who love the game, have to do is make sure the next Xavi Hernandez & Co have so also!