Buenos dias a usted and welcome to the daily World Cup column on Soccerlens.

Spain raised their game (slightly) to beat Germany in last night’s semi-final clash, but I’m afraid they actually had precious little say in the outcome of the game – as their fate had already been sealed by a certain clairvoyant mollusk.

(If you would like to subscribe to this column – and others like it on Soccerlens – then please feel free to follow this link, or you can also just enter your email address on the SL homepage.)

Spain ensured that there will be a new name engraved on the World Cup trophy come Sunday evening, after outclassing three-time winners Germany to book themselves a place in the final alongside the Netherlands – which, surprisingly, will be the first time the two countries have met in major international tournament football.

A single second-half header from Carles Puyol provided the numerical difference between the two sides, but in truth Vicente Del Bosque‘s side never really looked like conceding after once again bossing proceedings.

Whilst their performance could hardly be described as ‘vintage’, Spain controlled long periods of the game and Germany, though disciplined and hard-working, were restricted to a handful of half-chances as a result.

The reigning European champions threatened constantly but often failed to cap their patient approach play with a convincing final product – although David Villa came close to nicking Pedro‘s measured through-ball past the advancing Manuel Neuer and minutes later Sergio Ramos found space on the edge of the area, but thrashed a speculative effort wide.

Germany pressed as the first-half wore on, but continually struggled to bypass the wall of red shirts that kept conglomerating between themselves and Iker Casillas‘ goal.

Spain began the second-half in a much more incisive manner, and finally began to produce tangible efforts on goal, with Xabi Alonso going close on several occasions and Villa coming within inches of sliding home Andres Iniesta‘s driven cross.

It was in the 73rd minute that La Furia Roja‘s breakthrough actually materialised, when an unmarked Puyol rose to powerfully head Xavi‘s whipped corner past Neuer.

Spain then closed down the game with an elongated spell of ball retention, and even went close to adding to their lead – but Pedro, after being sent clear behind the German back-line by Xavi‘s measured pass, allowed Arne Freidrich to dispossess him when a square pass to late-substitute Fernando Torres would have almost certainly resulted in a second goal.

“All of our players were extraordinary – but we still have a match to play. We know Dutch football and it will be very tough in the final.”

“You must celebrate victory but with moderation and don’t forget your responsibilities. We are sportsmen and we want to reach out for the World Cup.

There is hardly anything more precious than to win the World Cup. We should not be bragging and too conceited, let’s just play the next match.”

Del Bosque reminds his players that they aren’t champions quite yet.

“Let’s enjoy the final. We dedicate this victory to Spain. If we play on Sunday like we did today, we will have a great chance.

We played as we wanted to. Now it is a final against Holland, a great team playing great football with great players in midfield and up front. We will have to impose our personality and football on them.”

“We have shown that in the big moments we rise to the occasion. It is the best game we have played. We deserved to score more but a Puyol goal put us in the final and we are exultant.”

Spanish striker David Villa is more than happy with his country’s performance.

“The [Spain] squad deserves this but we want more. We are happy to be in the final, that was our objective, but now we want to be champions.”

“The Netherlands have a lot of good players – Arjen Robben, Robin Van Persie, Wesley Sneijder – and we have to try to stop them. At the same time we need to play our game, to pass the ball around like we know we can, and create chances.”

Defender Gerard Pique is wary of the danger that the Netherlands pose.

“Sometimes we can overplay it, and we don’t shoot on goal enough. But I think that at the moment we are on a great run and if the opposition do not score, one goal is enough to win the game.”

Pique goes on to sum up what we were all thinking.

“I am confident they will win the title. Spain are a wonderful team. They are the masters of the game. You can see it in every pass. They can hardly be beaten. They are extremely calm and convincing. Spain were just better than we were and they deserved to win.”

“Over the past two or three years they have been the most skilled team of all. They circulate the ball quickly and we were not able to play like previous matches. We were not able to get rid of our inhibitions.”

And Loew is full of praise for the victors…

“I have got to try to wake up the team. We have another game to play. We will approach the match [for third place] seriously. We will come to terms with the disappointment and look forward. We have to look ahead and work hard and on Saturday provide a grand finale, if even a small finale.”

…but the German chief knows that his side’s World Cup isn’t over quite yet.

“We didn’t play courageously enough in the first half. We had a chance in the second but weren’t able to use it. It’s a huge disappointment. We wanted to do a lot and didn’t succeed.” 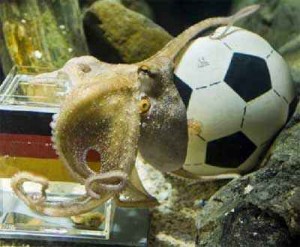 Was there any ever reason to doubt that Spain would reach the World Cup final?

Paul the Psychic Octopus, one of the more unlikely stars of this summer’s tournament, once again predicted correctly by tipping Del Bosque’s side to see off his native Germany in last night’s semi-final.

The Dorset-born oracle has a 100% record, after calling all six of Germany’s games correctly thus making an enemy of bookmakers everywhere. 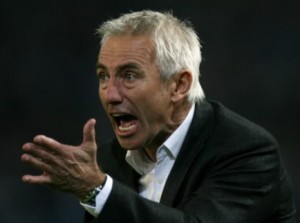 World Cup finalists the Netherlands have had to find new digs in South Africa after, rather pessimistically, only making reservations until the 5th July at the Sandton Hilton hotel in Johannesburg – presumably because they didn’t expect to make it through to the last week of the tournament.

By seeing off Brazil in the quarter-finals, Bert Van Marwijk‘s men extended their stay in South Africa by a further week, but the Hilton was fully booked ahead of the final at Soccer City on Sunday.

However, the Dutch have thankfully found a new home ahead of the showpiece final, booking in at the Sunnyside Park Hotel in Joburg. 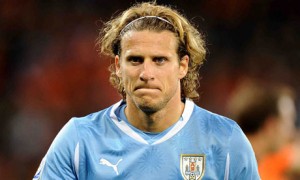 Uruguay striker Diego Forlan has admitted that fatigue, coupled with a niggling thigh injury, restricted him from matching his previous dynamic World Cup performances during La Celesti‘s semi-final clash with the Netherlands;

“Personally, I was tired. I’d felt some tightness in my thigh when the game started and, as the match went on, it became more and more difficult. I was limping before the end and trying to stay in the game, but it was too much.”

Forlan was forced out of the last ten minutes of the game, limping off in the 82nd minute (after notching his fourth goal of the tournament just before half-time), but the Atletico Madrid hitman is still hopeful of taking home the Golden Boot award – if he can regain his fitness in time for the third-place playoff game with Germany on Saturday;

If I had been better then I would have more chances but, as it was, I couldn’t help anybody. I hope to be fit for Saturday. I want to play for that third place, which would still be an achievement.

After that, there’ll be time to go on a long holiday.”

Go on then Diego, off to Centre Parcs with you – you deserve it! 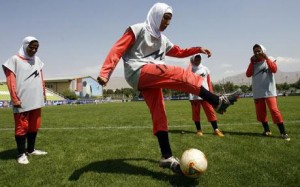 The government of Iran has outlawed the new national women’s football team kit as it doesn’t comply with the strict Muslim dresscode. In Iran, all women are required to cover their hair in public to conform to Sharia law.

In May, the Iranian Football Federation said it had reached a compromise with FIFA whereby the under-15 team would play in caps at the upcoming Youth Olympic Games in Singapore.

However, on Wednesday the women’s youth team tried on the new kit during a demonstration match and the official in charge of women’s affairs at Iran’s Physical Education Organisation stormed off when she saw that the strip did not adhere to that which had been ordered.

Xavi beaten by a vuvuzela…

He may be a world class midfield maestro, but Xavi sure as hell can’t blow that damn horn.

The Sunday Mirror journalist that arranged for a fan to storm into the England dressing room during their game with Algeria, will stand trial at a special World Cup court on 11th July – the day of the final. (Guardian)

Netherlands striker Robin Van Persie plans to use a framed photograph of Diego Maradona lifting the World Cup in 1986 to inspire him to victory in the World Cup final. (The Sun)

Wayne Rooney has been voted as the ugliest player at the World Cup, beating off such luminaries as Carlos Tevez and Franck Ribery to take the title. (The First Post)