Roll up, roll up and welcome to today’s World Cup column on Soccerlens.

The tournament in South Africa is now in full swing and I was really enjoying being immersed in football all day, every day- that was until about 8:10pm yesterday evening.

Diego Maradona‘s side got their World Cup off to a winning start after recording a deceptively narrow win over Nigeria in the opening match of Group B.

Nigeria certainly had their chances to score but, in truth Argentina should have won by a much bigger margin after dominating for large periods of the game yet failing to convert a raft of chances – with Nigerian keeper Vincent Enyeama almost single-handedly (literally at times) keeping his side in it.

You can read Andy Ryan‘s match summary for Soccerlens here.

As well as Maradona’s men, South Korea also got their tournament underway with surprisingly confident showing against a compact but unadventurous Greece side in Port Elizabeth yesterday.

You can read Jonathon Feyerherm‘s match report for Soccerlens here.

As you may be aware, goalkeeper Rob Green dropped a pretty sizeable b*ll*ck last night as England kicked off their World Cup campaign with an underwhelming 1-1 draw against the USA in Rustenburg.

Newly-appointed captain Steven Gerrard gave Fabio Capello‘s men the perfect start after prodding home Emile Heskey‘s pass with only four minutes on the clock, but England failed to press their early advantage – which would end up costing them a potentially crucial two points.

On a night when none of Capello’s selection gambles would prove to pay off, James Milner, obviously still weary from his recent bout of sickness, was replaced by Shaun Wright-Phillips after just half an hour.

England seemed to be holding on to their slim one-goal advantage in relative comfort until, five minutes before half-time, Green allowed Clint Dempsey‘s generous back-pass to squirm through his wet vermicelli fingers and over the line as the West Ham man scrambled – in vain – to recover.

Injury-plagued centre-back Ledley King was then replaced at the break by Jamie Carragher after the Tottenham man suffered a groin injury in the latter stages of the first-half.

The second half proved to be a slightly more fertile affair from England’s perspective, with a handful of chances falling to the likes of Heskey and Wright-Phillips – both men duly displaying their limitations in front of goal by firing shots straight at US stopper Tim Howard‘s midriff, when presented with ample opportunity to do otherwise.

However, the American side also had chances to nudge their noses in front, most notably when Jozy Altidore steamed into the area past a flagging Carragher, only to see his angled shot somewhat fortuitously pushed on to the post by Green.

As the game wore on, England noticeably (and more so, worryingly) ran out of ideas, eventually leaving Bob Bradley‘s side celebrating a well-deserved point.

You can read the match report here.

“Sometimes a forward misses, sometimes a keeper makes a mistake – that’s football. The second half [Green] played very well, but the mistake remains a mistake.”

England coach Fabio Capello. I could be wrong, but I think we may be seeing Joe Hart getting a run out in the Algeria game!

Said Rob Green himself. It’s just a shame that those other 999 times were in training.

“It was unfortunate. These balls are moving about. I don’t know how much the ball moved. It is unfortunate for keepers, They are the last line and, when they make a bit of a boob, it gets picked out.”

If there is such a thing as back-handed sympathy, then Frank Lampard has mastered it…

“I’d love to join the goalkeepers’ union and find an excuse – an awful pitch or the ball – but there was nothing. I’ve never seen anything quite like it.”

“Of course I feel for him. He has made a couple of really good saves and, as we have been saying all week, this ball is doing silly things.”

Green’s opposite number Tim Howard proudly declares himself to be a card-carrying member of the goalkeepers’ union.

“To the Boston Tea Party and Belo Horizonte, the Royal Bafokeng stadium can almost be added.”

The Sunday Times’ Jonathon Northcroft gets a little swept away.

You can always rely on The News Of The World for a subtle summation.

It pays to advertise… 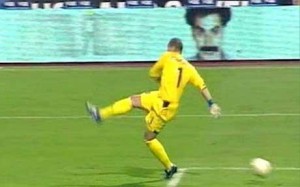 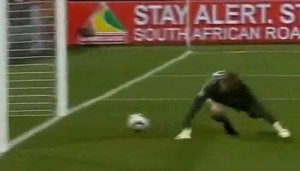 “According to Opta statistics, Rob Green made more errors leading to goals than any other player in the Premier League last season.”

From the BBC Sport website. Good to see that the West Ham ‘keeper has carried his domestic form on into the World Cup.

Rino calls it a day… 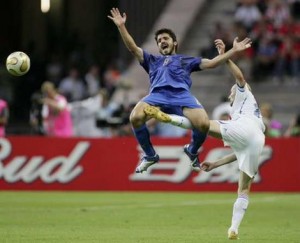 Italy midfielder Gennaro Gattuso confirmed at a press conference yesterday that he intends to retire from international football after this summer’s World Cup – and also outlined his plans to one day manage his country.

The 32-year-old holding man, who was part of the Azzurri side that won the tournament in 2006, has admitted that he is now feeling the effects of age and therefore intends to move aside to allow younger players a chance to break into the national team;

“It is only right, for the way I see football, that at the age of 33 I step aside and give more space for players who have better physical stamina.

As a player, it will be my last World Cup, but then I have a dream of one day leading the Nazionale to this tournament as a coach.”

Gattuso suffered with a string of injuries last season, but the former Rangers man is ready to repay his national team coach for the faith he has shown in him;

“I wake up without pain now and can train regularly. Undoubtedly I had a very tough campaign with Milan, but Marcello Lippi gave me this chance and I must be ready.

If I don’t start then I’ll cheer on my team-mates. It is an honour for me to wear the Azzurri jersey and there’s nothing better. I would’ve come to South Africa just as a water boy.” 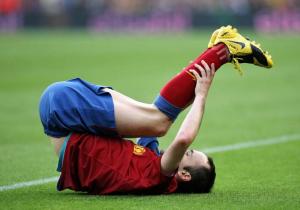 Spain coach Vicente Del Bosque has told a Spanish television programme that he is confident that midfield maestro Andres Iniesta will be fit enough to start for La Furia Roja in their opening World Cup game against Switzerland on Wednesday.

“Iniesta will play and he will be in the starting line-up, tomorrow he will train with the ball and there are still 72 hours left.”

Well, that seems pretty definitive to me.

FIFA have blamed transport issues for the varying degrees of empty seats visible at the 2010 World Cup so far. (Sporting Life)

Whilst it’s not strictly ‘World Cup news’ as such, the agent of Serbian winger Milos Krasic has admitted that Inter Milan (rather than Juventus, as was first thought) are leading the race to sign his client. (F365)

Ghana captain Stephen Appiah has admitted that he is ‘scared’ of the threat posed by Serbia and that his side are ‘not even thinking about Germany and Australia’ as a result. That doesn’t sound like a particularly strong tactic to me Stephen. (BBC Sport)