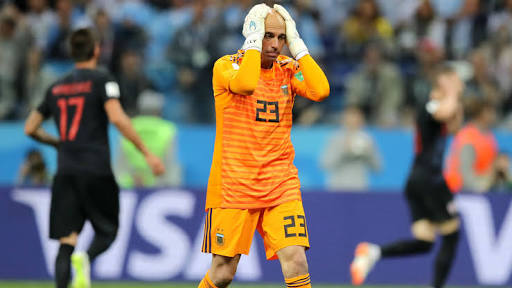 As round two of the World Cup 2018 group stages continues, teams are starting to book their place in the next stage or be eliminated.

Thursday’s action saw Australia dominate Denmark but draw 1-1 and France book a place in the round of 16 with a 1-0 victory over Peru, ending their opponents’ tournament in the process.

Finally, Argentina were humbled 3-0 by Croatia despite the presence of Lionel Messi, with the South Americans on the verge of being dumped out at the first time of asking.

Despite the luxury of attacking players at Argentina’s disposal, the Albiceleste have looked like a ragged outfit in this World Cup.

After opening with a 1-1 draw against Iceland, the South Americans were ruthlessly dispatched on Thursday by Croatia in a 3-0 rout.

With Messi almost anonymous and a catastrophic defensive effort, coach Jorge Sampaoli has looked to absorb the blame for the defeat and take on board the fans’ frustrations.

“I would beg for their forgiveness, especially those Argentina supporters who made such a great effort to be here,” he said after the loss.

“I repeat what I said – I’m responsible. I was just as dreamy-eyed as any fan before. So I’m hurt.

“I did the best job I could and I quite simply did not find a way to give them what they wanted.”

Argentina can still make the round of 16, but need to hope Iceland do not beat Nigeria or Croatia and then heavily beat the Africans themselves in their final outing.

Australia impress but get VAR luck

Not much was expected of Australia at the World Cup but the Socceroos but in another good performance on Thursday, coming back from a goal down to draw 1-1 with Denmark.

A fine Christian Eriksen strike opened the scoring for the Scandinavians, but the majestic midfielder was quiet thereafter as Bert van Marwijk’s men were in the ascendancy and equalised through a Mile Jedinak penalty.

A VAR decision was needed to confirm Yussuf Poulsen’s handball, but Denmark coach Age Hariede’s annoyance at the decision could be understood given the contentious nature of the decision.

“I do believe there was a penalty, but the whole issue with VAR is that there are people somewhere in Russia to look at decisions because it looks like it could maybe have been a penalty,” he said.

“But other situations they are not having a look at. So who is deciding? The referee on the pitch or people in dark rooms? In my opinion it removes a bit of the charm of football.”

Australia will be encouraged by their performance, with 19-year-old winger Daniel Arzani impressing from the bench.

The Socceroos now need to beat Peru and hope France defeat Denmark in the final round to stand a chance of progressing on goal difference.

Les Bleus are already through to the next stage after a first-half Kylian Mbappe goal gave them a 1-0 win over Peru on Thursday, with Olivier Giroud coming in for praise in the aftermath of the game for his workmanlike performance in an otherwise flat showing from Didier Deschamps’ men.

Neymar in, Firmino still out

Brazil return to action on Friday with a clash against Costa Rica, with the South Americans hoping to record their first win of the World Cup.

Selecao coach Tite has stated he will field an unchanged starting XI from the side that drew 1-1 with Switzerland, meaning Neymar, who does not look fully fit, will again play – while Roberto Firmino continues on the bench.

“Yes, yes – it’s not a sacrifice,” the Brazil boss said of his star player when asked about his fitness.

“It’s an evolutionary process, you just speed up the steps. Yes, he would be playing.

“We want to win, it’s a World Cup, but the coach is not going to risk a player’s health by being dishonest to him. That’s a price that’s too high to pay.”

In Friday’s other action, Iceland and Nigeria face each other in Group D and Switzerland and Serbia round off the fixtures in a Group E clash.

How are your predictions going? Participants in the Sportslens Predictor competition stand the chance of winning a 50-inch television!