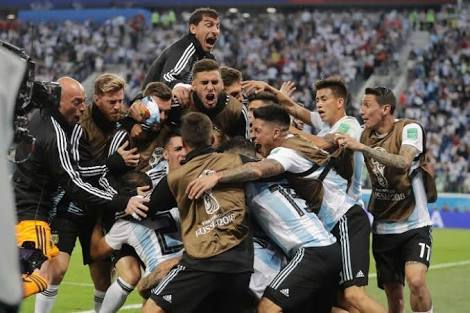 Tuesday’s World Cup action was nothing if not dramatic, with Argentina sealing a place in the round of 16 after an agonisingly late goal.

The South Americans have been joined in the next stage by France, Denmark and Croatia, as the first knockout round starts to take shape.

In Wednesday’s action, Germany and Brazil are back in action as Groups E and F will be decided.

It has been a tumultuous tournament for Argentina so far, with the historic footballing nation struggling to unleash their considerable attacking talent and looking susceptible to a group stage exit.

In the end, an excellently-taken Marcos Rojo goal at the end of their clash against Nigeria gave the Albiceleste a 2-1 win and a place in the round of 16.

Lionel Messi scored a sublime opener before Victor Moses equalised from the penalty spot, with the Argentina talisman relieved to get a helping hand in his side’s lucky escape from Group D.

“I knew that God was with us and would not leave us out of the competition,” he said.

“I don’t remember having ever suffered so much, because of the situation and because of what was at stake. It was a huge release for all of us.

“We had been through difficult days because of the result in the previous game. But fortunately we were able to achieve our objective. We knew would do so.”

Argentina legend Diego Maradona was in the crowd and was pictured giving obscene gestures to Nigeria fans during the game, while South American media claim he received medical attention after the dramatic win.

France and Denmark through

The culmination of Group C was slightly less action-packed, with France and Denmark playing out a 0-0 draw – the first of the tournament.

The result ensured both sides booked a place in the round of 16, but fans were visually frustrated by the teams’ respective lack of ambition or attacking impetus.

In the other Group C clash, Peru beat Australia 2-0, much to the delight of their supporters, condemning their opponents to bottom spot in the pool.

France will now take on Argentina in the next round in a fascinating tie, while Croatia will face Denmark.

Brazil and Germany were heavy favourites to top Groups E and F respectively, but both of these powerhouse nations are in need of positive results on Wednesday to book their place in the round of 16.

The holders were beaten by Mexico in their opener and needed a last-minute Toni Kroos strike to record victory over Sweden.

Germany boss Joachim Low is determined to set the record straight against South Korea on Wednesday.

“South Korea have players who can use the space when it opens up,” he said.

“It would be helpful on the whole if we could lose the ball less often.”

Should Sweden beat Mexico in the other Group F game, and Germany win, three teams will have six points and it will go down to goal difference.

In Group E, Brazil sit on four points and still need a result against Serbia, who know that beating the samba stars is their only guarantee of progression.

Selecao coach Tite has backed Neymar to continue to improve.

“This is an evolution, if you look at the heat map of his last two games, it has increased considerably,” the Brazil coach said.

“Maybe he will be at the top of his game in the next match. We shouldn’t place the whole responsibility on his shoulders.”

Switzerland know a draw against Costa Rica will be enough to send them through.

The Sportslens Predictor competition is being fiercely contested – get your tips in today for a chance to win a 50-inch television.