Soccer’s ultimate event, the FIFA World Cup is now just around the corner. Some of the best players in the world will soon head over to Brazil to headline what promises to be a tournament to remember. Following the soccer frenzy, I was going through the teams and the groups a few days back which got me thinking about the World Cup Dream Team. Soccer being my favorite sport, I went to work and started to pick my best eleven and the manager.

It looked easy at first but it was anything but. There were a lot of factors to consider like how soccer is played these days, the tactical and technical ability and the formation that would suit these players. After spending hours going through teams, players and coaches, I came up with my very own World Cup Dream Team. I wish I could somehow make them play together. 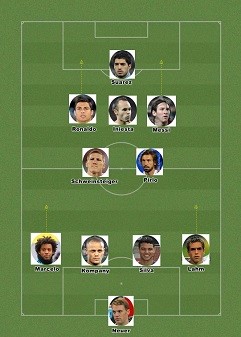 Young, athletic and a brilliant show stopper, Manuel Neuer is simply the best goalkeeper in the world right now with the potential of being an all-time great. He has won two league titles and one UEFA Champions League with Bayern Munich already. Neuer will now be looking to win the World Cup with Germany to cap off what have been a remarkable last few years for him.

Thiago captains both his club (PSG) and country (Brazil) and is without a shadow of a doubt one of the best center backs in the business today. Strong in the air and a very good reader of the game, he is the man to have at the back. Silva has won league titles with AC Milan and PSG. He will be leading the hopes of the entire nation as he looks to guide his country to their sixth World title.

Vincent Kompany, just like his partner in crime at the center of the defense, Thiago Silva, also captains both his country and club. The Manchester City and Belgium skipper is a brutal defender who is not afraid to put himself on the line to stop a goal. Kompany has guided City to a league title and an FA Cup. With Belgium boasting one of the most talked about squads in the World Cup, Kompany will be the man they will look to lead them to World Cup glory.

“He is perhaps the most intelligent player I have ever trained in my career. He is at another level,” Pep Guardiola on Philipp Lahm.

He is the best right back in the world today and that has been the case for quite some time too. Winner of six league titles and one European Cup with his club Bayern Munich, Lahm will lead Germany into the World Cup looking to bring the biggest title in soccer back home for the fourth time in their history.

“Marcelo possesses a better technical ability than me,” the legendary Roberto Carlos once said and he isn’t too far off the mark either with that comment.

You just don’t get to play for Brazil and Real Madrid if you are no good. You don’t even play for them even if you are very good. You need to be special to make the grade and that is what Marcelo is. He has already got his hands on three league titles in Madrid and this is just the beginning of what has the potential to be a legendary career.

Bastian Schweinsteiger is one of the most gifted players on the planet today. He is an incredibly good reader of the game with great passing range. He offers both Germany and Bayern Munich the solidity in the middle of the mark and can also act as the point from where his club and country can start swift counterattacks. Seven league titles and one European Cup are a testament to the quality of the man himself. Oh and he would be my captain of the team as well.

Andres Iniesta has been an integral part of Spain and Barcelona’s rise to the top of the ladder. He is the guy who keeps them both moving. He has the passing range to unlock any defense in the world and his goal scoring record isn’t too bad either. Iniesta is a wonderful player. He has won six league titles and three UEFA Champions league with Barcelona. With Spain, he has been equally instrumental, playing an important part in the team winning back to back European Cups and a World Cup. He can orchestrate attacks as a midfielder better than most players in the world and this is why he is my pick to unlock defenses further up the pitch.

They call Andrea Pirlo “the architect” in Italy and rightly so. The Italian is an all-time great. He is the man that orchestrates the play for both Italy and his club Juventus. Pirlo is a gem of a player who has done it all on both club and international level. He has won a World Cup, two UEFA Champions League titles and four league titles (two with AC Milan, two with Juventus). Pirlo is on the brink of clinching his third league crown with Juventus. He will be the deep lying playmaker who will start attacks from the back and will give Schweinsteiger the license to go forward.

The Portuguese legend, yes he is a legend, is certainty to make the cut. The current Ballon d’Or holder is brilliant enough to play for any side in the world. He is as close to a perfect soccer player as can be. He is direct, likes to run at defenders, can score with either foot, can head the ball better than anyone in the game today and is not short on confidence. He has won three league titles and one UEFA Champions League with Manchester United and more league championships with his current club Real Madrid. I can’t think of a better, all round player than him on the international scene right now.

The little Argentine, Lionel Messi is the only player in history to win the Ballon d’Or four times. He is only twenty six years old. Messi is a genius on the soccer pitch. He and Ronaldo are simply the two best players in the world right now. A product of La Masia, the famed Barcelona academy, Messi has been instrumental in his club winning all that they have since he made his debut in 2004. Half a dozen league championships and three UEFA Champions League titles in just ten years is a staggering haul whichever way you look at it.

The Uruguayan just beats Sergio Aguero for the sole striker’s spot in the team. Suarez has been the catalyst that has propelled his club Liverpool right back among the elite. The fact that he missed the first eight games of the season due to a ban and still tops the scoring chart in England just goes to show the kind of form he is in right now. He can play on the wing as the focal point of an attack or as a number 10. There aren’t too many better goal scorers in the game today than Suarez.

The Spanish tactician is without a shadow of doubt among the all-time greatest coach. Under his tutelage, Spain has won one European Championship and entered the World Cup in Brazil as the holders of the Jules Rimet Trophy. Del Bosque made his name with Real Madrid when he guided his boyhood club to two La Ligas and two UEFA Champions League titles between 1999 and 2003. Del Bosque is an exceptional no-nonsense tactician who reads the game brilliantly. Oh and he is the only manager in history to get his hands on the European Championship, the World Cup and the UEFA Champions League. I rest my case.

So there we have it, this is my World Cup Dream Team for you. My ideal formation would be 4-2-3-1 with Pirlo and Schweinsteiger sitting right in front of the defense and Iniesta being flanked by Ronaldo and Messi to join Suarez in attack. There is so much flexibility here that the team could easily play 4-3-3 as well with Pirlo, Schweinsteiger and Iniesta just behind Ronaldo, Messi and Suarez. These are all mobile players so their interchanging of the positions during the break will make it literally impossible for the opposition to defend against them. They just won’t know who to track.

Now over to you, let’s hear what you have to say about the team and whether you agree with these picks or not. Who will be in your World Cup Dream Team? Give it a shot if you are a soccer fan, you will enjoy it.