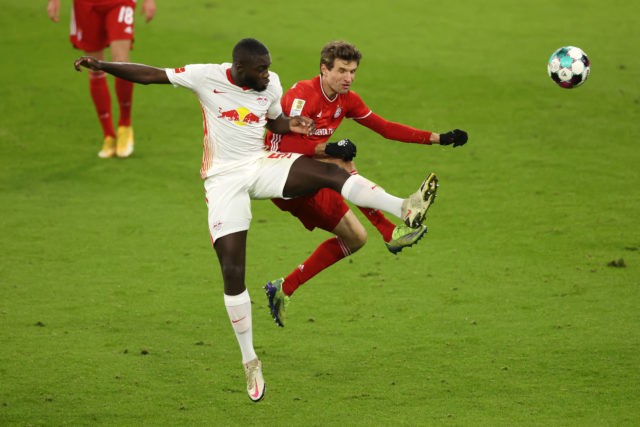 Chelsea are close to signing Bayern Munich defender Jerome Boateng on a free transfer this summer and that could pave the way for the German champions to bring in a replacement.

The Bavarian giants celebrated the second treble in their history last season with Boateng and David Alaba making up their central defence, but both players appear set to head for the exit door in four months’ time.

There has been a complete breakdown in contract talks with Alaba and CEO Karl-Heinz Rummenigge recently confirmed that the Austrian will leave the club when his deal expires at the end of June.

Boateng is in a similar contract situation and the indications are that he could leave alongside his defensive partner, with the Blues said to have agreed a deal in principle with his agent to sign him this summer.

With the duo likely to pursue their careers elsewhere, Bayern will be on the hunt for at least one replacement and, as things stand, it appears that Dayot Upamecano is the leading target for Hansi Flick’s side.

Upamecano has been contracted to RB Leipzig for the past four years where he has evolved into one of Bundesliga’s most efficient central defenders, racking up 102 appearances in the competition.

He was initially fancied to head for a new challenge last summer when he entered the final year of his contract, but was convinced to put pen-to-paper on a two-year extension with a buy-out clause inserted.

His reported £38 million release clause will become active at the end of the current season and Bayern are favourites to land his signature despite the competition from the likes of Chelsea and Liverpool.

While the Blues and Reds are both attractive options, Upamecano may have the preference to remain in a familiar surrounding in the Bundesliga where he won’t need much time to settle with his new club.

Bayern’s hierarchy have already approved a move for the French centre-back and there is the optimism that they can convince the defender to head to Munich when the current season concludes.

During the board meeting in December, the supervisory board approved a move for Upamecano. The bosses are optimistic they can trigger the €42.5m clause with the player's agreement. In the next meeting in March, Salihamidžić wants to present his list for the summer [@SPORTBILD] pic.twitter.com/716SQATClq

Do Bayern need another centre-back after Upamecano?

Should Bayern sign Upamecano, he is likely to take up a regular starting role next season and could be accompanied by Niklas Sule at the heart of the defence.

The departure of Boateng and Alaba would still leave Bayern with sufficient defensive depth as both Lucas Hernandez and Benjamin Pavard can also play at centre-back.

Elsewhere, Bayern have a talented young centre-back in Tanguy Nianzou, who has yet to make an impression since his move away from Paris Saint-Germain last summer.

The 18-year-old’s career has been hampered by two long-term injuries but he will be hoping to establish himself once he is back to full fitness.