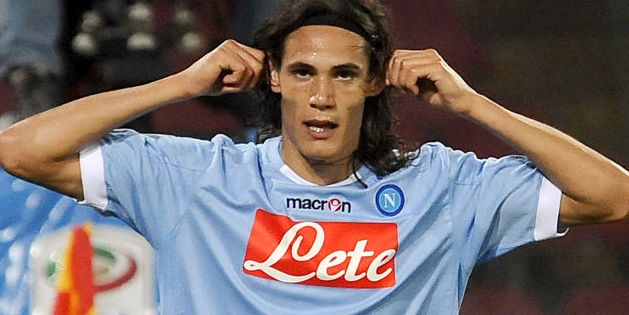 Liverpool striker Luis Suarez might be dreaming of playing alongside Cristiano Ronaldo, but with every passing day, it seems like his national team-mate Edinson Cavani’s chances of playing with the Portuguese are getting stronger.

The 26-year-old has a £53m buy-out clause and Napoli president Aurelio De Laurentiis wants every potential buyer club to pay the fee in full.

Chelsea are in desperate need to land a top quality striker in the summer. The Blues have failed to lure Radamel Falcao, who joined Monaco while Borussia Dortmund have blocked any move for their star man Robert Lewandowski. It is now understood that the Special One or the Happy One, what-ever way you may call him, has urged the Chelsea officials to do all they can to bring Cavani at Stamford Bridge.

Manchester City are equally interested in signing him and reports emerged that the Premier League runners up are ready to offer striker Edin Dzeko in a part exchange deal, but Napoli are not too interested with that offer.

The situation has become complicated with Cavani hinting his desire to join the La Liga giants. The player’s father further added fuel to the fire by giving credence to the rumour. He said as quoted in The Sun:

“The intention of Edinson is to play for a team like Real Madrid. That is desire and his preference.

“When he speaks to his family, our son tells us he wants to play for Real.”

Madrid are also interested in buying him, but the Los Blancos are not ready to trigger his release clause, as the club primarily looking to invest a huge chunk of money (over £80m) for Tottenham winger Gareth Bale.

According to reports in the Marca, Napoli might reduce their asking price if Madrid includes Alvaro Morata and Sami Khedira into the deal. While Madrid may agree to sanction the release order for young Morata, they probably won’t part ways with the German midfield dynamo.

Also, English tabloid The Mirror reports that Chelsea will hold crunch talks with Napoli in the next 24 hours to negotiate a reasonable deal for Cavani.