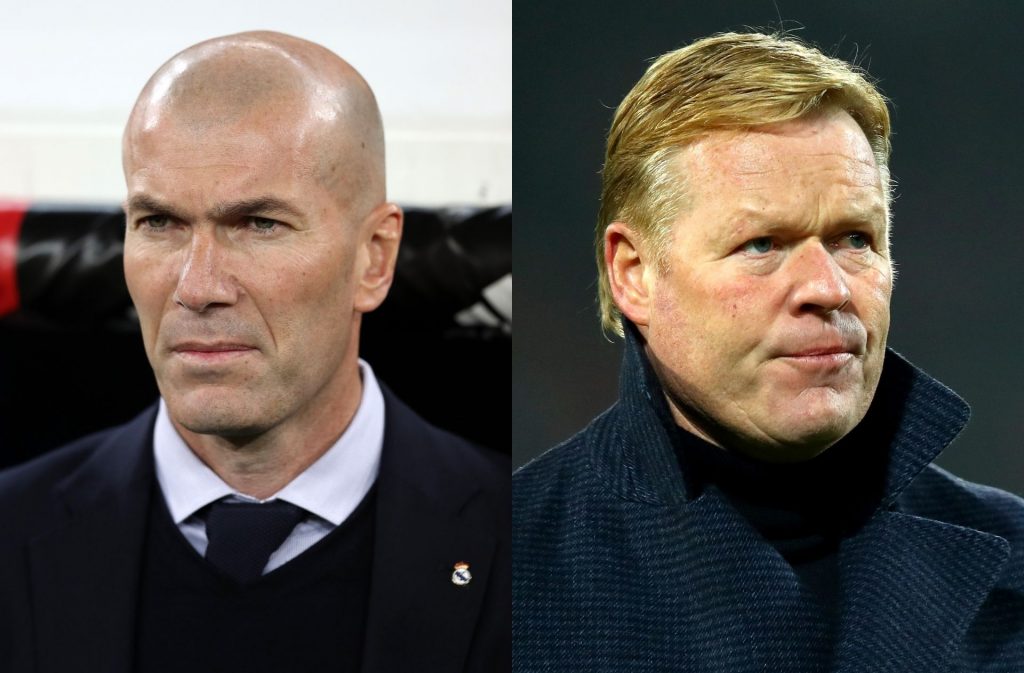 Real Madrid and Barcelona have had mixed campaigns by their high standards this season, and the latter are out of the La Liga title race ahead of the final matchday.

Barcelona had the chance to overtake Atletico Madrid for the top spot this month, but they played out a disappointing goalless draw against Diego Simeone’s side.

The result has been followed by a draw and a defeat, which sees them seven points adrift of Atletico ahead of the last matchday of the campaign.

By contrast, Madrid have matched Atletico’s results over the past four games (three wins and one draw), but they lie two points adrift of their rivals.

Atletico clinched a dramatic 2-1 comeback win at Osasuna last night, where they scored both of their goals after the 80th minute.

They must win at Real Valladolid on matchday 38 to clinch the title, and you would fancy them with the momentum gained from the recent clash.

Barcelona are already assessing the future of Ronald Koeman, while there are suggestions that Zinedine Zidane could leave Madrid for the second time.

Here are potential candidates who could replace them.

Koeman has publicly stated that he feels ‘mistreated‘ by the media and emphasised that he has done a credible job with the club winning the Copa del Rey title last month.

However, a run of five points from the last five league games may lead to serious consideration whether the club should continue with the Dutch manager.

There has been only one main candidate regularly mentioned in club legend Xavi Hernandez, who is currently the head coach of Qatari side Al-Sadd.

He recently signed a new two-year contract with the club, but this has not ended the speculation with club president Joan Laporta considering him for the role.

Laporta was the reason behind the emergence of Pep Guardiola in 2008 when he handed the Spaniard the manager’s role without any senior coaching experience.

A similar thought could be behind the pursuit of Xavi, and it remains to be seen whether the 41-year-old would have a similar impact to Guardiola if he takes charge.

Los Blancos personally want Zidane to stay, but the Frenchman has reportedly made his mind up to move on, though he has publicly denied it.

An immediate candidate to replace him could club legend Raul Gonzalez, who has been the head coach of Madrid’s reserve team since 2019.

However, the club could prefer an outside replacement with vast experience, with some believing that Raul should take up the chance with Eintracht Frankfurt.

The former Los Blancos captain has been identified as someone who could become the club’s head coach in the long term.

In such a case, Massimiliano Allegri appears the frontline candidate for the job despite being out of work for the past two seasons.

The Italian has been on a long sabbatical since parting ways with Juventus in 2019 after guiding them to five straight Serie A titles.

He is regarded as a defensive-minded coach, but his winning mentality and ability to get the best out of the players should keep him in good stead.

Madrid tried to appoint him three years ago when he was at Juventus. Talks have recently been held, and Allegri appears prepared to take over.

Read: Barcelona close to landing the signature of this attacker with 31 goal contributions.