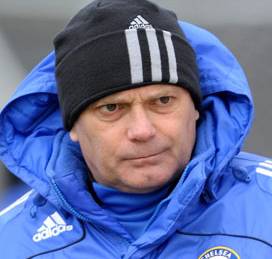 As you may or may not be aware, Chelsea took the executive decision to sack their erstwhile assistant coach of the past two-and-a-half managerially turbulent years, Ray Wilkins, yesterday afternoon.

It is being widely reported that Wilkins was completely unaware of his impending dismissal before being summoned to meet with Chelsea’s chief executive Ron Gourlay at half-time of the friendly between the club’s second-string and their Bayern Munich counterparts at Cobham at lunchtime on Thursday – a game he had been overseeing alongside manager Carlo Ancelotti.

Upon arriving in Gourlay’s office, Wilkins was duly informed that his contract (which was due to wick away next July) would not be renewed, and that he was to leave the club ‘with immediate effect’. Ruthless isn’t the word.

A statement was then posted on Chelsea’s official website (from which Wilkins’ biography has now been removed) which read:

“Chelsea Football Club chief executive Ron Gourlay has announced today that the board has decided not to renew Ray Wilkins’ contract. This will take effect immediately.

Gourlay said: ‘On behalf of everyone at the club I would like to thank Ray for everything he has done for Chelsea Football Club. We all wish him well for the future’.”

With Chelsea vehemently stressing that there have been no major disagreements involving Wilkins and his fellow coaching staff and executives, and no further explanation proffered as to his sudden departure, it is considerably difficult to fathom why the club have parted ways with a man who Ancelotti described as having ‘blue blood flowing through his veins’ in his recent autobiography – also claiming that the club ‘couldn’t have won a thing’ without his assistance.

Whether or not you subscribe to Ancelotti’s glowing attribution of success, it’s fairly indisputable that Wilkins has provided Chelsea with a fair amount of stability during the last couple of campaigns.

Originally returning to assist Luiz Felipe Scolari adapt to the English game, Wilkins’ worth excelled his capacity and, as such, he was retained when the boisterous Brazilian left the club after just eight months at the helm – aligning himself with Guus Hiddink to help paper over the various schisms that Big Phil had exacerbated, then greasing the wheels for the arrival of Ancelotti just two days after the Dutch ‘fixer’ had lifted the 2008/09 FA Cup.

Ancelotti was understandably keen to keep Wilkins on as his deputy upon his arrival at Stamford Bridge, as the fluent grasp of Italian he had obtained during his three-year spell at AC Milan in the mid-1980s would prove a beneficial asset in his capacity as an intermediary between the players and the newly-installed manager himself – a double-winning season ensued.

However, the once-vital ‘translation’ that Wilkins provided has gradually become less of a boon as Ancelotti’s English has improved dramatically over the course of a year – it could be that the Chelsea hierarchy, renowned for their fairly callous decisions at boardroom level, may have sensed a shift in the dynamics between the pair and took the action that they deemed appropriate.

The reality is that Gourlay (Ancelotti’s limited involvement suggests that the decision was not his) is now probably looking for an assistant that will be able to provide a different tactical or coaching approach on the footballing side, now that the Italian incumbent is comfortable dealing with the English media himself.

That said, given that Wilkins was known as ‘The Crab’ during his playing days (a reference to his propensity for the lateral pass), surely a sideways promotion would have suited everybody?