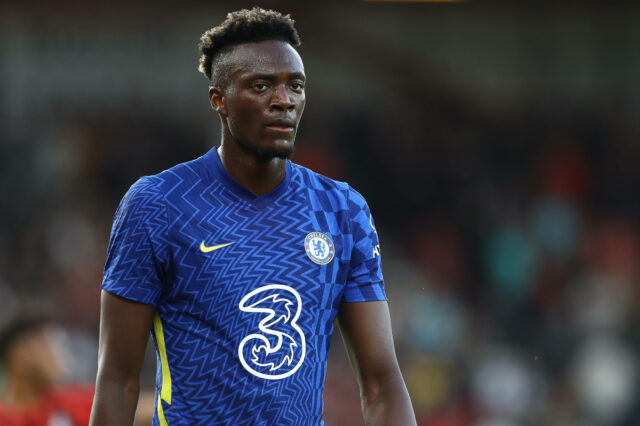 West Ham United and Arsenal are keen to sign Tammy Abraham from Chelsea and are weighing up a move, according to The Daily Mail.

Southampton, Atalanta and Roma are also in the race to sign the England striker who has fallen out of favour at Stamford Bridge.

The 23-year-old is currently not in Thomas Tuchel’s first-team plans, and the Blues want to get rid of him this summer.

The Blues reportedly putting the finishing touches to complete a £97.5 million transfer to bring the Belgium international to the Premier League.

Lukaku’s arrival will push Abraham further down the pecking order. Chelsea value him at around £40m, with a host of clubs vying for his signature.

Abraham, who is on £57k-per-week wages, has a wealth of Premier League experience and is a fantastic goalscorer.

Capable of playing as a target man, Abraham is also comfortable operating alongside another striker.

Abraham would undoubtedly be a smart signing for David Moyes’ side.

West Ham badly need a striker this summer, with Michail Antonio remaining the only option for the Hammers.

Southampton are also looking to sign a striker to replace the void left by Danny Ings, while Arsenal may need a replacement for Alexandre Lacazette.

The Saints are also keeping an eye on Chelsea teenager Armando Broja, who impressed on loan at Vitesse Arnhem last season.

However, a move to Serie A could be Abraham’s best option, with his excessive wage demands likely to scupper his hopes of staying in the Premier League.