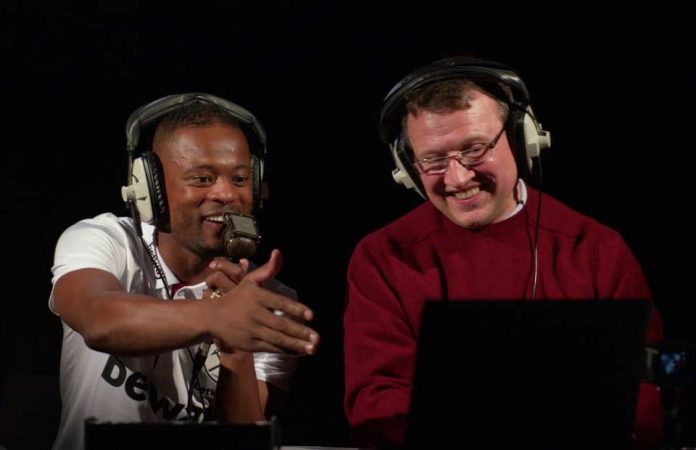 Joe Hart, Patrice Evra, Mark Noble and James Collins joined Hoiles before the start of the Cheltenham Festival to learn the ropes of a skill that looks far easier than it actually is.

Hoiles, who was nominated for Sports Commentator of the Year in the recent British Sports Journalism Awards, is a master of the art and he certainly had his work cut out teaching the quartet the tricks of the trade.

Accuracy, rhythm, making every word count and a wide vocabulary are key elements of horse racing commentary and it’s fair to say some of the players adapted better than others.

One clear winner emerged, although one of the foursome’s quirky sense of humour also shone through during his commentary.

Watch the video below courtesy of Betway Insider to find out who came out on top.

Hoiles will be a central part of ITV’s coverage of the Cheltenham Festival and he’s certainly come a long way since calling his first races at Bath on Cup Final day back in 1992.

A spell in Hong Kong helped him hone his craft, but his commentary for the Cheltenham Gold Cup in 2008 is the one that marked him down as one of the best in the business.

In a recent interview with the Racegoers Club he admitted it was the best moment of his career:

“There are many but top of the list is probably Denman’s Gold Cup for which I did the on course commentary,” he said.

“The reaction of the crowd to every twist and turn of that race was just incredible and it was a real privilege to be able to describe it.

“I think he would have beaten just about any horse that day and it will always be one of my favourites.”

His eye for detail famously saw him correctly call Frankie Dettori’s error in prematurely celebrating victory aboard Lady Aurelia in the 2017 Nunthorpe Stakes at York.

“Frankie punches the air – he’s sure, I’m not” exclaimed Hoiles and he was proven to be right in questioning Dettori’s antics.

“All I knew from the angle, as I have called there enough times to know, was that Frankie (Dettori) on Lady Aurelia hadn’t won by far enough to celebrate like he did,” he added.

“I can’t lay claim to thinking he hadn’t won. If you had asked me straight after I would have said he won, but by a narrow margin and not one you could celebrate over as that line bends back towards you.

“It was very fortuitous from my point of view that Marsha won. From a personal point of view I was happy I was comfortable enough to put my doubt on the line.

“If Frankie had won by a neck, I would have looked silly, but that wasn’t what I thought at the time and it would have been easy enough to have ducked it.

“It was the fact I didn’t and I got the pay-off for it that was pleasing.”

Hoiles will undoubtedly provide some memorable moments during this year’s Festival, but it’s unlikely that he’ll be joined on co-commentary by any of the West Ham players this time around!