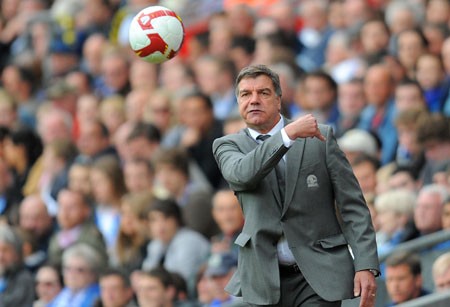 Messrs. Gold and Sullivan have stumbled from bad decision to ludicrous decision since taking over at West Ham but they may well have struck gold with the appointment of Big Sam. The quickest form of transport is through the sky and that’s why Allardyce’s long ball football could provide the Hammers with an instant return to the topflight.

Last season was a truly catastrophic campaign for the Hammers. From the outside looking in, a team of talented players ended up getting relegated due to over-inflated egos and a terrible lifeless gaffer. Grant somehow managed to cling on to his job in January when it was evident change was needed. It proved to be a costly mistake by Gold and Sullivan to show faith in the Israeli and not install a manager such as Allardyce with a proven reputation for keeping teams out of the relegation dogfight.

The appointment of Big Sam may have happened 6 months too late but Gold and Sullivan have found an experienced manager capable of ensuring West Ham’s bubble does not burst. It may not be pretty on the eye but the 57 year old’s tried and tested tactics do seem to get results.

Just look at what happened when he left Blackburn. Blackburn were 7th in the league when the new Indian owners decided they wanted to try and turn Blackburn into Barcelona and Allardyce was shown the door. By the time the season ended the club had narrowly avoided relegation on the last day of the season. The terrible work of Steve Kean has made Allardyce look like a tactician of the highest calibre.

Many West Ham fans point to the fact that their club is home to the Academy of Football and that West Ham are renowned for their free flowing attacking style. This, although an attractive philosophy, has got the club nowhere in recent years and change was needed.

With Allardyce in charge West Ham should have more than enough to return to top flight at the first time of asking. Although a lot will depend on the clubs capability to hold on to their better players and if they leave, who is brought in to replace them.

Big Sam will look towards experience and has already talked of improving the squads ‘physical edge’. In other words a 6 foot 6 centre half will be arriving any time soon alongside a battering ram of a centre forward.

Gold and Sullivan’s own ego trip will be a pain in the neck for Allardyce throughout his tenure at Upton Park, but that will be nothing like the actual pain in the neck the Hammers faithful will encounter as they look skyward, desperately trying to locate the ball as it plummets down from outer space after another Matthew Upson hoof.

The imminent move to the Olympic Stadium after the London 2012 Olympics could prove to be the making of West Ham. Not only will they have a better stadium to attract a higher quality of player, more fans and possibly an Arab sheikh with billions to spend but Big Sam will be able to utilise the running track for some superb long throw tactics. Don’t know about you but I can’t wait for it…