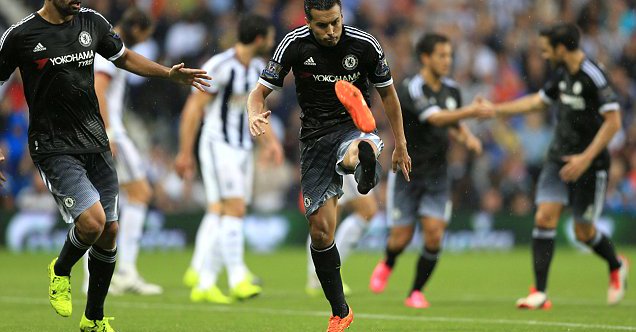 Defending Premier League champions Chelsea secured their first win of the 2015/16 season at the Hawthorns which also saw West Bromwich Albion score their first and second goals of the campaign. John Terry received his sixth career red card, while Chelsea new boy Pedro impressed on his debut, scoring one and setting up another.

Tony Pulis’ Baggies set up in a 4-1-4-1 shape with Morrison’s positioning slightly variable as a connect between the midfield and Rondon. Yacob, on the other hand, sat deepest in the line between the back four and the four-man midfield, and played a destroying role. West Brom maintained a good line, and only when their shape was distorted following transitions Chelsea found goalscoring chances.

Chelsea were in their template 4-2-3-1 formation, with Pedro slotting into the right wing as Willian tucked inside in the ‘hole’ area. Hazard primarily operated from the left, although there were positional interchanges between Hazard, Willian and Pedro behind lone striker Costa, who himself offered wide movements when the attacking midfielders moved inside.

Pulis’ teams are known to be defensively organised, and West Brom were no different. They allowed Chelsea, who predictably had greater share of possession, to carry the ball into their half but afforded them little space centrally. Chelsea had to be patient with the ball, circulating it around the massed Baggies ranks, while expecting individual quality to make the difference.

Off the ball, West Brom were compact vertically and their shape morphed into 4-5-1 and kept minimal distance between the lines in that shape. A centrally positioned Costa was of little danger to centre-backs, Olsson and McAuley and only when he drifted outside did the Blues’ needle players in Hazard and Pedro influenced play.

The first goal, from Pedro, came when Hazard found space in between the back four and the covering midfield whilst Costa occupied Olsson around the box. Needle players that they are, Hazard and Pedro combined well in tight spaces to give Chelsea the lead in what was an even tie till that point.

Despite West Brom not opening central avenues, Chelsea’s attacking movements progressed through the middle. With Hazard as well as Pedro cutting inside from their wide starting positions, the Blues had to be patient initially owing to West Brom’s central block but gradually spaces opened up in the central areas from which they created most of their chances.

Azpilicueta’s goal at the stoke of half-time was an important pointer to Chelsea’s multi-dimensional attacking potential. With the central passing lanes all but blocked, Fabregas’ straight scooped ball towards Costa from midfield bypassed the West Brom block, whilst creating confusion inside the box from which Azpilicueta capitalized.

Impact Of Terry’s Sending Off

Terry received his marching orders in the 54th minute, which meant the Blues had almost an entire half to play with ten men. As a result of the red card, Gary Cahill replaced Willian and Chelsea changed to a more counter-attacking shape of 4-4-1, with Hazard and Pedro tucking inside from their wide positions and broke at pace whenever Chelsea recovered possession inside their own half.

Chelsea maintained their four line rear guard, although they couldn’t maintain adequate pressure in wide areas from the likes of Pedro and Hazard, who indented towards West Brom’s goal expecting offensive transitions. One such moment led to Morrison’s second goal to reduce the Baggies deficit, when McManaman easily created space on the deep left channel to whip a cross into the Scot’s head.

Rickie Lambert was brought on for McLean, which altered West Brom’s shape into 4-4-2, although the ex-Liverpool striker dropped short as Rondon was the lone target up front. Arsenal loanee Serge Gnabry was a like-for-like replacement for McManaman late on in the game.

Pedro’s attacking verve was sacrificed for the defensively solid John Obi Mikel as Chelsea looked to hold on to their one goal lead. This allowed Fabregas to shift to the right, as Chelsea tried to cut off all possible avenues to their goal in the latter stages.

“This wouldn’t be an issue, a problem. Saido is a great lad. It happens where it can be disruptive, and it has been disruptive. I had a good chat with him yesterday [on Saturday] and he’s fine, no problems, but it’s the transfer window. Why can’t we have a system where it finishes before the start of the season.

“There is always a question mark because how many top players come to England and don’t perform immediately? And then people wonder if he’s the right player, if he can adapt, was he a good or bad buy? There are examples in our club, and in lots of others too. But I expected this. He’s a very good player. That was a very good performance.”