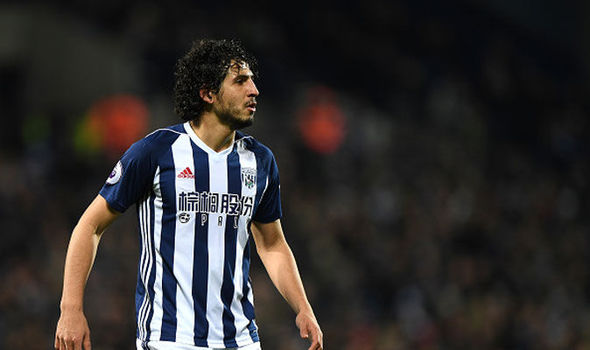 West Brom have suffered their second defeat in the Championship after they lost 1-0 against Middlesbrough at the Riverside stadium on Friday night.

Daniel Ayala scored a stoppage-time winner for Boro as Tony Pulis’s side went top of the Championship.

The Baggies enjoyed a lion share of possession but it was Boro who dominated the match from start to finish. They registered 18 shots during the game, and found the breakthrough right at the end when Spanish centre-half Ayala scored from close range.

One player who really struggled throughout the game for the Baggies was Ahmed Hegazi. The 27-year-old has come under criticism for his poor performances in recent games, and the Baggies fans slaughtered him on social networking site Twitter for yet another lacklustre display.

He looked shaky throughout the match, and struggled against Boro striker Assombalonga. He was equally poor in dealing with aerial battles with Flint.

The Egyptian failed to deal with Ayala in the final minutes of the game, as Boro snatched all three points.

Here are some of the best reactions from the Baggies fans on Twitter:

Brunt is not a CM and was poor. Time for Field. Hegazi was atrocious. Time for Dawson. We are starting games far too slowly and still conceding ridiculous late goals. Goal by Boro was embarrassing. Jones claim of a possible 100 points is clearly a no go. #wba

Formation works, however Hegazi doesn’t, he really needs to be dropped now as he is a liability, he has shown this in every game so far. Midfield doesn’t work either drop them both or drop one. The two teams we have played with anything about them have made us look average #wba

Bartley did fine tonight. Dawson was rusty in his first game, but imho goal was on Hegazi, liability game after game.

Dawson will improve the defence but could still do with another! Hegazi a massive liability. Did see a link with wes morgan the other day although it is almost certainly a lot of crap

Just seen the goal again. Hegazi let ayala go, not Bartley as some wba fans seem to be suggesting. He’s crap and shouldn’t be anywhere near the side.

I honestly think livermore besides a more mobile midfielder will see him so much better. Defensively he’s good, but brunt and Hegazi killing us atm so poor.