One of the biggest games in the German calendar each season takes place this Saturday as Borussia Dortmund take on Bayern Munich.

Despite a 31 point difference between these two sides, and with Bayern Munich clear at the top of the league, this still promises to be an intense and exciting match up between two of the top Bundesliga sides.

Anything less than a win would virtually end Borussia Dortmund’s hopes of qualifying for next season’s UEFA Champions League which are only hanging by a thin thread right now anyway – 12 points behind fourth place with eight games to go.

You can watch Borussia Dortmund v Bayern Munich live online by signing up to FuboTV here.

Nuri Şahin’s latest injury has kept him out for a month and the Turkish international has been out for the majority of the season. He is unavailable again for the weekend.

Full-backs Łukasz Piszczek, Marcel Schmelzer and Oliver Kirch are also all sidelined, as is stand-in right-back Kevin Großkreutz. Erik Durm has only just returned to first-team training himself.

Aside from a problems on the outside of his defence, Jürgen Klopp otherwise has the rest of his team to pick from after the international break.

Pep Guardiola has had a number of injuries to deal with this season but the strength Bayern Munich have in depth has allowed them to run away with the Bundesliga once again this season.

David Alaba ruptured his knee ligaments whilst playing for Austria, putting the left-back out of action for at least two months.

The Austrian is one of a number of injuries for the visitors, but arguably the hardest for the Spanish head coach to replace. Joining Alaba on the sidelines are Javi Martínez (cruciate ligaments), Arjen Robben (stomach), Franck Ribéry (ankle) and Thiago Alcántara (lack of fitness). 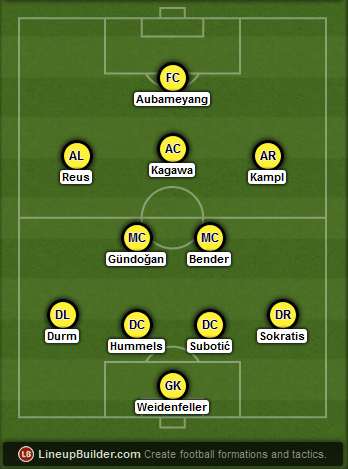 Sokratis Papastathopoulos is the likely choice at right-back whilst Jakub Błaszczykowski is an outside shot. Shinji Kagawa has been starting the important matches at number 10 with Henrikh Mkhitaryan finding himself amongst the substitutes often these days. Marco Reus is the star on the left whilst Pierre-Emerick Aubameyang is the club’s top scorer as Ciro Immobile has not delivered greatly in his limited options since moving from Torino in the summer. 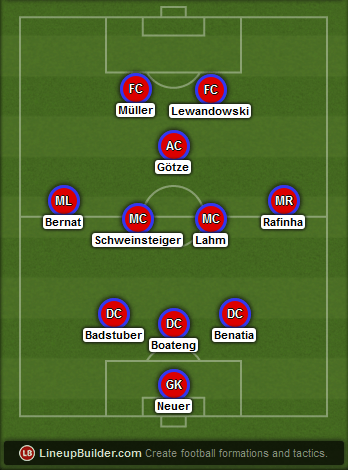 Pep Guardiola went with this 3-4-1-2 formation in beating Dortmund at the Allianz Arena earlier this season. With David Alaba injured we could certainly see them go to a back three again this weekend. Holger Badstuber has made a good return following his long, long layoff. Jérôme Boateng has had a solid season at centre-back. Philipp Lahm and Bastian Schweinsteiger will protect the defence from the middle of the park whilst also try to dictate the game from their. Going forward, Mario Götze, Thomas Müller and Robert Lewandowski are all scoring for fun this season.

Thomas Müller vs Mats Hummels
With Arjen Robben and Franck Ribéry sidelined, Bayern Munich are limited with their threat down the wings. Thomas Müller will however do his best to draw defenders out of position and free himself with his movement. A very intelligent player with an eye for goal will give Mats Hummels and co another tough time in defence. Whether he’s helping Robert Lewandowski find space, creating chances for teammates, or getting in that six-yard box for a tap-in, you can be sure Thomas Müller will be a key factor in this game.

Mario Götze vs Sven Bender
Perhaps not having his best season, but Mario Götze still has nine league goals this season and will be up for it versus his former side. Can play up front and on the wing but we think he’ll play the number 10 role on Saturday. That will leave responsibility on the shoulders of Borussia Dortmund’s defensive midfielders to keep the 2014 World Cup final goalscorer quiet.

Marco Reus vs Rafinha
Borussia Dortmund can certainly look to their German star to get amongst the goals in this match. Despite some injuries, Marco Reus is having another top season. Often playing out on that left he could come up against Rafinha unless Guardiola opts to put Philipp Lahm out there. A threat on the counter, running with the ball, shooting from long range and finding space in the box, Reus will be the one to watch for the Bayern defence.

31 – After 26 games, there are 31 points between these two sides who finished first and second in the Bundesliga last season.

49 – Pep Guardiola would reach his 50th Bundesliga win in record time by claiming three points on Saturday. It is only the Spaniard’s 61st game in the German league. Udo Lattek currently holds the record for reaching 50 wins in quickest time – the legendary head coach achieved this in his 78th match in charge back in 1972.

66 – Manuel Neuer has kept 66 clean sheets in his 120 Bundesliga appearances for Bayern Munich. The German number one was at fault for the goals in their surprise 2-0 loss at home to Borussia Mönchengladbach before the international break.