West Ham midfielder Dimitri Payet is regarded as one of the best free-kick takers in world football, something League Two Accrington Stanley can attest to after the Frenchman’s 96th minute set-piece sent the Hammers into the fourth round of the EFL Cup on Wednesday.

A curling effort from the right, up and over the Accrington wall and into the bottom left corner of the keeper’s net; Payet’s latest was his seventh successful free-kick for club and country since joining West Ham in 2015, for a measly £10.7m.

And the Frenchman admits that his free-kick proficiency doesn’t come from hours on the training ground:

“Since [January] I have not been practising as I have been happy with the way I am hitting the ball,” said Payet back in April,

“So I am carrying on with that technique and now I just take a few before each game when I am warming up.” 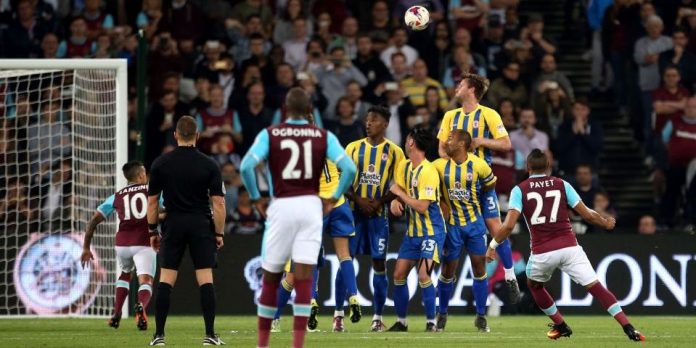 Unlike many modern day set-piece maestros, Payet’s free-kick technique is nothing extraordinary – he’s just mastered the basics. The likes of Cristiano Ronaldo, Gareth Bale and Didier Drogba are known for striking the ball either with the laces or instep after running up to the ball straight on, while Payet approaches the ball from around a 45-degree angle, either wrapping his foot around the ball or glancing the ball with the instep at speed.

The key to Payet’s ability with the ball is much less ‘Hollywood’ when compared with his peers. The Frenchman is simply an outstanding judge of distance, spin and dip. Possessing of a devil of a right foot, Payet is able to send the ball into the net via the tightest of angles, often clipping the woodwork, managing to ace an attempt first time that would take others a good dozen tries.

Choosing his best is a tough ask, with his gravity-defying effort against Crystal Palace and his 35 yard strike for France against Russia both gems. Maybe they need to reinvent the defensive wall: