Nicolas Gaitan will be leaving Benfica this summer. At least Portugal media feels so. Manchester United have been heavily linked with a move for the €35m rated Argentine star, while La Liga club Atletico Madrid have also registered an interest.

Spanish newspaper Marca claimed yesterday that Atletico have turned their attention towards Nico Gaitan. The Rojibalcos are willing to dish out €35m for the Benfica star and one or two players could be used to sweeten the deal. 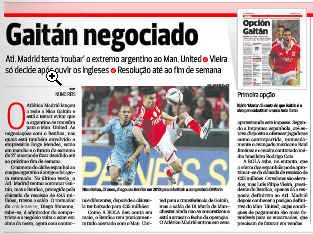 Portugal newspaper A Bola claims today that Atletico are trying to hijack a deal for Gaitan from Manchester United. They are currently negotiating a deal with Benfica and talks have been going on with Gaitan’s agent, Jorge Mendes, but the Portugal club will only reply to them after they get an official reply from United over the matter.

Gaitan’s agent, José Irribarran, recently stated that there has been a pending negotiation with Manchester United. He said as quoted by A Bola: “Everything is possible. There’s a negotiation pending with Manchester United. The player wants everything to go as smoothly as possible, We’re waiting for an answer from the vice-president. I can’t really say anything else.”

A Bola claim that Manchester United have already agreed terms (no written document, probably verbal) with Benfica over signing Gaitan, but the Red Devils will only make a move if Di Maria is sold.

Di Maria has enjoyed a good campaign with Argentina in the Copa America and has stated recently that he is not angling a move away from Old Trafford. United having signed him for a record transfer fee last season, will hardly be willing to sell him after just 12 months since his move from Real Madrid.