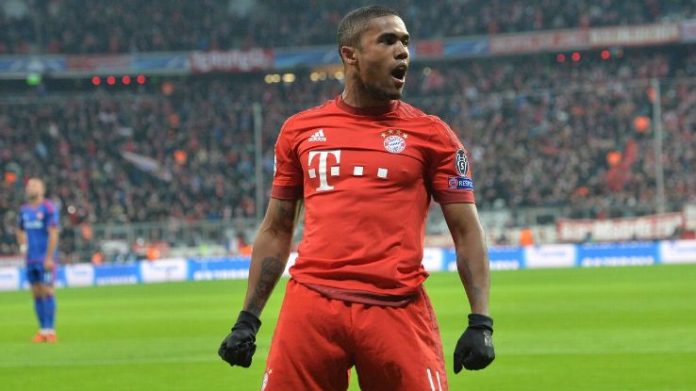 Tottenham Hotspur are interested in a summer move for Bayern Munich winger Douglas Costa and the Bundesliga champions are willing to sell the South American speedster for around £30 million, according to The Independent.

Spurs had an excellent 2016-17 campaign, finishing second in the Premier League and enthralling with some sublime attacking play.

Mauricio Pochettino is seemingly set to splash the cash this summer as Tottenham prepare for more Champions League football next term, with winning a trophy the ultimate goal in North London.

The Argentine trainer was vocal last summer about his desire to add pace in wide areas to his Spurs squad and duly bought Moussa Sissoko and Georges-Kevin N’Koudou.

With neither working out as planned, Tottenham are being widely touted with a move for a new attacker this summer to fulfil Pochettino’s requirements.

Supposed target Wilfried Zaha has signed a new contract at Crystal Palace and as such a move for Costa as an alternative could well be an attractive proposition.

Bild have stated this week that Bayern are willing to offload the former Shakhtar Donetsk wideman this summer after he fell down Carlo Ancelotti’s pecking order at the Allianz Arena.

However, the British report states that it would take an offer of £30 million to sign Costa and that Juventus are also interested in the Brazil international.

For Spurs to push on to the next level, a number of top-class signings are needed to provide strength in depth and improve Pochettino’s starting XI.

While £30 million is at the top of what Tottenham are willing or able to pay, landing Costa would be a real statement of intent by the North London club.

Frightening quick, skillful, experienced and with the ability to create and score, the Bayern star would add another dimension to an already sublime Spurs forward line.