World Sport Bloopers has brought you every blooper from the world of football (or for US fans, soccer). We decided to compile a list of top 5 football bloopers to help get you through your weekend!

Italy recently unveiled their new strip in a friendly match against Uruguay. The frequently misunderstood Italian striker Mario Balotelli appeared for the second half wearing Italy’s old shirt. What was even more bizarre was that he had already been wearing the new one in the first half. 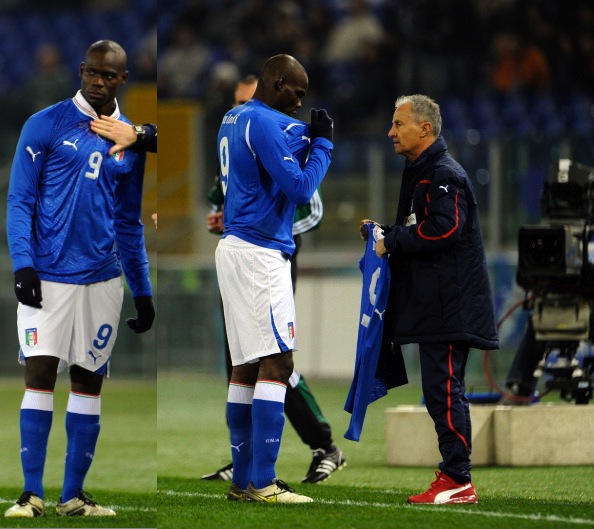 4). Goalkeeper Kicks Fan, Gets Sent Off!

In a cup match between Ajax and AZ Alkmaar, AZ keeper Esteban Alvarado gets an unexpected visit from a fan. He then kicks him while he’s down and get sent off!!

Most sports fans are used to the samba skills of the Brazilian players and the way they casually dance their way post their opponents. It seems that that flare extends to the touchline where this gymnastic trainer performs a ritualistic cartwheel as he runs on and off the field!

2). Argentinian Misses 3 Goals In One Match

Martin Palermo misses three penalty kicks in one game against Columbia in 1999.

You read the title correctly! In a Belgian Provincial League game between Templeuve and Quevy, a player is accidentally head butted and lies unconscious in the penalty area. Astonishingly, as he is about to taken away by paramedics, he is given a second yellow card and sent off!

For more great sport bloopers from around the world, check out World Sport Bloopers.