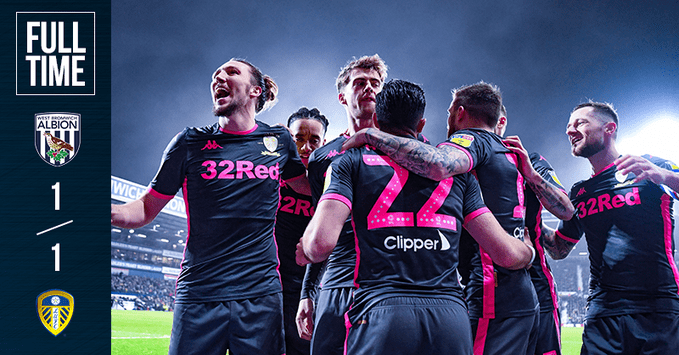 Leeds maintained their position at the top of the table after earning a 1-1 draw against West Bromwich Albion in the Championship on Wednesday.

Both the Championship promotion favourites benefitted from the result, as they are jointly tied at the top, with the Whites having a slightly better goal difference.

Former Leeds United player Tony Dorigo took to social networking site Twitter after the game to express his reaction. He felt that Leeds were the better side of the two and that they deserved all three points.

Another very good response to a bad start. Over 90 minutes #LUFC were clearly the better side, deserved all three points but a point will suffice. Onwards and upwards, well done boys. 💪🏻#lufc #mot #alaw #grit

Albion started brightly with defender Semi Ajayi giving Slaven Bilic’s side the lead inside two minutes when he poked in after a goalmouth scramble.

However, the 26-year-old was unfortunate to deflect Patrick Bamford’s header beyond Baggies goalkeeper Sam Johnstone in the second half.

It was an action-packed match, with Leeds goalkeeper Kiko Casilla making a key save from Matheus Pereira’s free-kick, and then denied Matt Phillips in a one-on-one situation.

The introduction of Bamford and Barry Douglas at the interval saw Leeds creating some good chances, and also had opportunities for a winner in a breathtaking finale.

Leeds enjoyed 63% of possession and registered 10 shots during the game, according to BBC Sport.