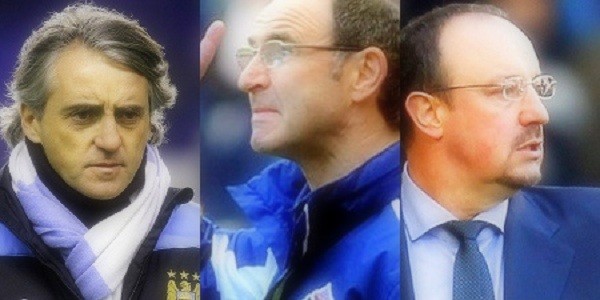 Rafael Benitez at Chelsea, Roberto Mancini at Manchester City and Martin O’Neill at Sunderland are all managers under pressure but very different types of pressure.

Benitez guided the team to an emphatic 6-1 win over FC Nordsjaelland at Stamford Bridge but it wasn’t enough to help the team through in the Champions League. He’s now under pressure to help Chelsea rediscover their Premier League form because he could be sacked before the end of the season if Chelsea drop out of the top four.

Roberto Mancini will always admit he’s under pressure because of what he’s achieved as the Manchester City manager so far. The club are out of the Champions League for a second season in a row but the side have a great chance of retaining their Premier League title.

Mancini is under big pressure this weekend because it’s the Manchester derby with United visiting City at Eastlands. If City lose that game then it will put them six points behind Manchester United and unless Mancini can turn around that sort of deficit by the end of January, he could be asked to walk before the end of the season.

You’ve also got to consider the other side of things and Martin O’Neill is one high profile manager under a lot of pressure at Sunderland. This is different pressure because Sunderland are not expected to challenge for any silverware, it’s the pressure of what relegation can do to a club and manager.

O’Neill is under pressure because Sunderland spent a lot of money over the summer and they have a very good squad of players. He’s also under a lot of pressure because he is widely respected as one of the best tactical managers in the Premier League and this is being tested to the limit at the moment.