The next Chelsea manager should be … John Terry

Regardless of whether Chelsea beat Napoli tonight, and regardless of whether Chelsea qualify for the Champions League or not this season, the signs are crystal clear. The next Chelsea manager must either be extremely special (even Mourinho would be hard-pressed to fix the current Chelsea state, and he’s not coming), or it needs to be someone who commands widespread respect and authority inside the club.

Since God himself isn’t coming to Stamford Bridge (and the dreams of Guus, Pep and Jose are just that, dreams), Roman Abramovich has just one option – appoint John Terry as player-manager.

The upshot of this will be that team morale will more or less take care of itself. Terry will have specialised coaches working with him and the squad to take care of training, tactics and occasionally, team-selection but by and large he will be in front of the cameras (which he likes), rousing the players (which he likes) and uniquely for a manager, leading them on the pitch (which he likes).

You can bring in a Damian Comolli or Frank Arnesen to look after transfers (Rafa Benitez might be worth a punt for that role) and the academy, and a competent assistant manager (get Clarke back? demote RDM?) to assist the manager, whose role is then limited to managing the team on and off the ground. For someone like Terry who has a massive influence in the Chelsea dressing room and on the pitch, it’s the ideal role. As he ages, it’s also great on-the-job training for him to move upstairs when he’s done playing. 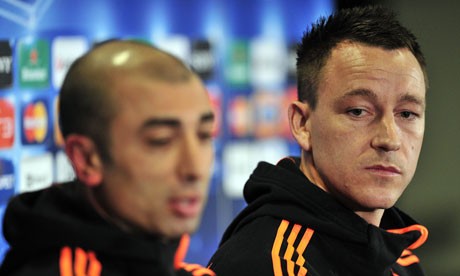 John Terry – the next Chelsea manager?

The downside is that you’ll end up with an inexperienced manager, but unlike AVB, the inexperience here lies in tactics, not in commanding the players’ respect. If Terry has the necessary resources at his disposal he can get the team playing to the maximum potential according to the methods that suit them best, as opposed to instigating a massive change that the team has so far resisted for the last few years.

John Terry could be the manager Chelsea need to at least get them playing like title contenders. Or he could be exactly the type of manager the players deserve. Either way he’s the perfect fit for the job. If only Roman Abramovich would listen to his players…