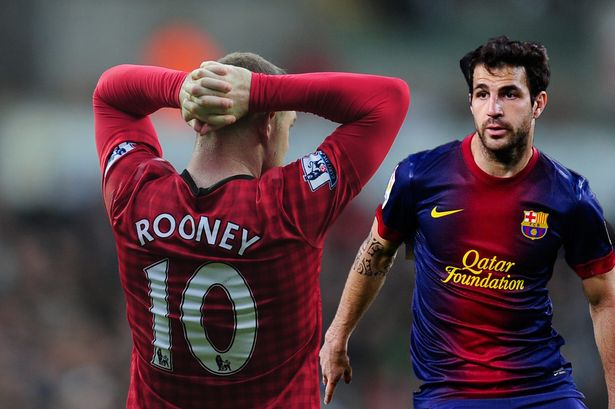 In the past weeks all the news tickers, websites and football blogs have been overflowing with stories about Manchester United’s waning, increasingly frustrating and most likely unsuccessful pursuit of a midfield maestro that us fans hope will magically solve our central midfield dilemma.

I am of course talking about current Barcelona player Cesc Fabregas, who emerged as United’s primary target as soon as his fellow countryman Thiago Alcantara decided, like many others in the past, to ignore approaches from the Red Devils and make his way to the land of Brezels and Beer to join his former coach Pep Guardiola at the Bayern revolution.

It is obviously up to the reader what is to be believed when it comes to what the press reports. Some say Thiago denied being approached by United. Others say Fabregas keeps giving them hope, while his Barca teammates are more than 100% sure that he wants to stay. Other annoying sites post regular updates of ‘boosts’ and ‘blows’ that teams receive in the long drawn transfer sagas.

If everything that the media published over time was true, Lewandowski would be wearing red too this season, Higuain would be an Arsenal player and I wouldn’t need to write this article since United wouldn’t have a problem in midfield with all the brilliant apparently “done deal” signings that haven’t really happened in the last four or five years.

I for one, have attained a certain level of “transfer window nirvana” by limiting the stuff I believe only when it is published on certain websites that are in my opinion credible. And that list has been added to and edited based on a vast number of transfer disappointments over more than a decade of being a Manchester United fan.

Like I have said before, it also helps that I am one who is extremely practical. Naturally, the news I read gives me hope, but till its done and dusted and announced in those websites on my “credible list”, I refuse to let myself dream. Then I need to see pictures of the players being unveiled to really get me excited.

With Fabregas, it is exactly the same situation. In a footballing sense – it all seems to fit perfectly. He knows the league well and already has excelled in it. He can form a potent partnership with Robin van Persie and offers exactly what United lack in terms of the insightful passing, reading the game and runs in to the penalty area. But again, will it happen ? Probably not! and I don’t let myself get carried away thinking about how awesome it could have been.

Then of course there are the alternatives to Cesc. I would only settle for three of the many that have been mentioned. Luka Modric was my dream signing last summer but now I have my reservations, even though you never know – he didn’t have the greatest season at Madrid but did produce a spectacular goal to help knock United out of the Champions League.

When Bastian Schweinsteiger was thrown into the list, my eyes almost popped to see the words “United’s plan B” next to his name.  If I was David Moyes, a player of his caliber would be my plan A, even though I do know that its probably more likely that Cardiff would win the Premier League, than him playing for United and me celebrating my dream of a German player at my favourite club.

Marouane Fellaini is probably the most likely of the lot to end up playing at Old Trafford and if that happens, I wouldn’t be too disappointed. It may just work out well for all parties. We just have to wait and see.

You have to also consider the fact that Wayne Rooney might leave. Frankly I have gotten quite sick of what I’ve been hearing. If he wants to go, Moyes should probably let him go. Another huge debate is that he fits so perfectly at Chelsea that selling him to them would be as good as letting the premiership go back to the blue side of London.

Lets put this tactfully. I think that Chelsea are strong enough to win the Premier League this season with or without Rooney. And the only way that Moyes’ United can change that is if they have a midfielder who brings the qualities that Fabregas has.

The way I see it, is that if Rooney stays, he will either be used very scarcely or will just be like a cancer to the moral of the squad. So its probably better to let him go and concentrate on a big signing. I am not sure how many United fans agree with me, but that will be interesting to note.

Stepping away from central midfield, one thing they probably would agree with me about is that all of United’s failure to lure top class players, including that gaping hole in the middle of the park when they play, would be forgotten if they went all out and got Cristiano Ronaldo back from Madrid. I am quite sure they would sign up for that. Is that a possibility? More than just probably not!

I think I will for now lay low and go with the “beggars aren’t choosers” attitude and go buy my Fellaini wig. Well, there’s no real guarantee that Roberto Martinez would let him leave Everton too easily either. I hope I’m wrong but I see United starting the season with Carrick, Cleverley, Anderson and Giggs being used centrally. A promising combination and good indeed – but definitely not good enough to go all the way, given how their competitors have strengthened.