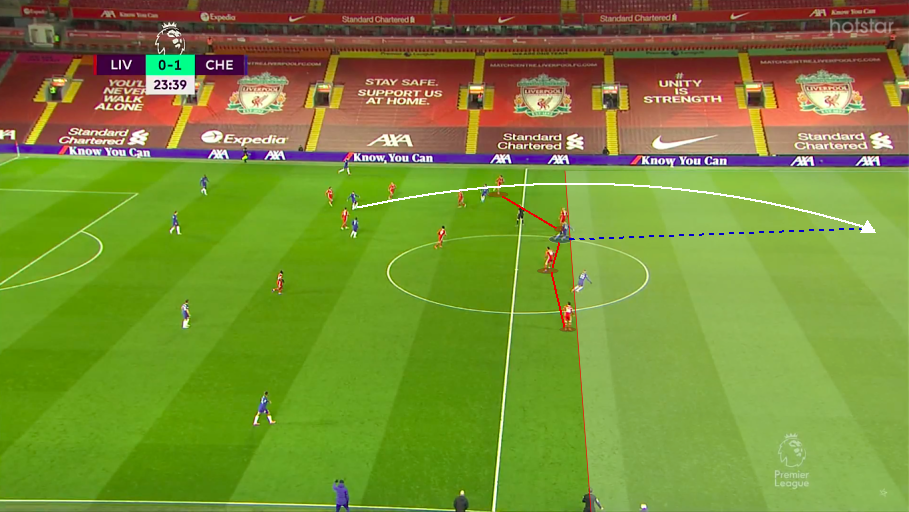 It was a tale of two trajectories as Liverpool took on Chelsea.

The hosts had ended their league losing streak with an away win over Sheffield United, but at Anfield, they had lost their last four and failed to win in six. Chelsea, meanwhile, were unbeaten under Thomas Tuchel, winning four of their last five away games.

This was an important clash in the battle for the top-four, and in the end, the Blues emerged victorious by yet another solitary goal.

In this analysis, we will attempt to break down just how they beat the bruised defending champions, with a specific focus on the whopping 113 long balls that were attempted.

Chelsea did score their goal through a long ball (which was followed by some individual brilliance), and they will surely feel that they should have had another by similar means as Timo Werner’s was caught offside by a fingernail. So, let’s take a look at how they went about their long balls first:

Liverpool’s high defensive line has been breached on various occasions this season, and Chelsea were the latest beneficiaries of it.

Tuchel openly admitted in his pre-match interview that Werner was selected ahead of Olivier Giroud and Tammy Abraham simply for his pace, and that proved to be a wise call. 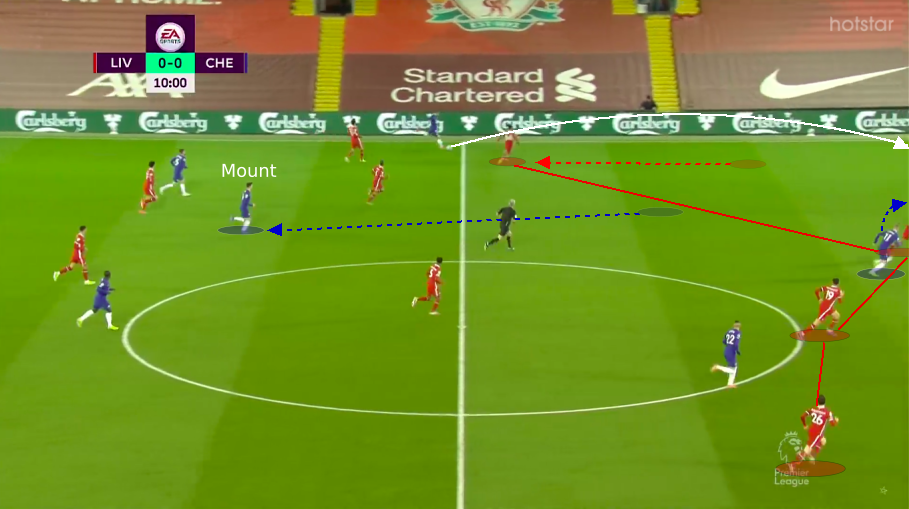 Mason Mount often dropped deep for Chelsea, so there was a lot of open space on the right of Liverpool’s defence, which is where most of the long balls for Werner landed. 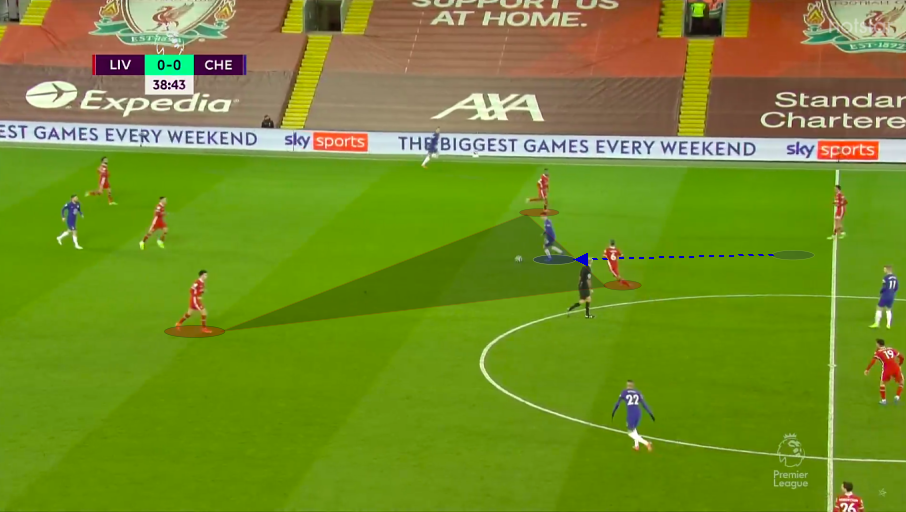 To live with Werner’s pace, the Liverpool backline decided to drop off in the later stages of the first half. However, the rest of the side could not follow the back-four in transition, which served to create vast expanses of free grass between the lines, which was exploited by Mount. 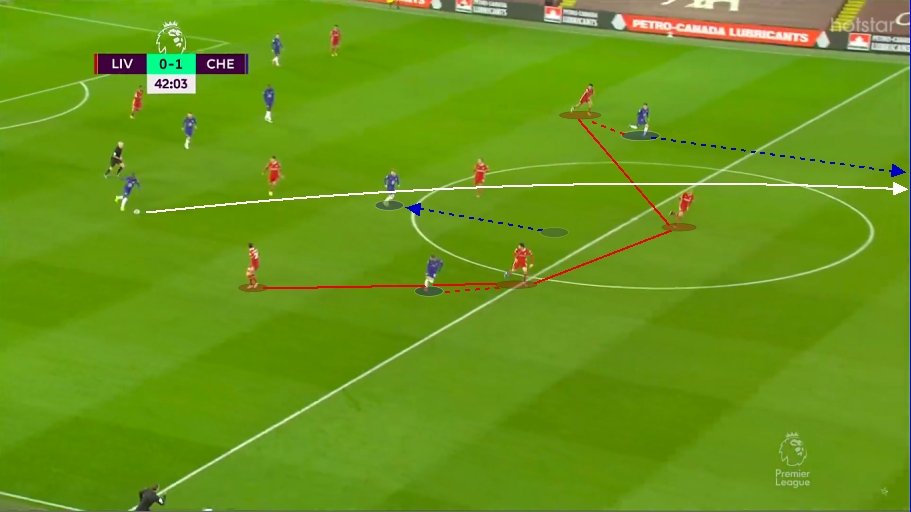 In other cases, Werner dropped back, freeing up Mount to push forward and chase the long balls. This particular instance led to the only goal of the match, as Mount cut inside against Fabinho and brilliantly found the bottom corner.

In this manner, Chelsea used long balls to hurt Liverpool in transition.

Breaking down a back-five is no easy business, as is proven by the fact that Chelsea had only conceded twice in their eight games under Tuchel before this match, with one of the goals being a comical own goal. Long balls were Jürgen Klopp’s preferred tactic too, so here is how Liverpool used them: 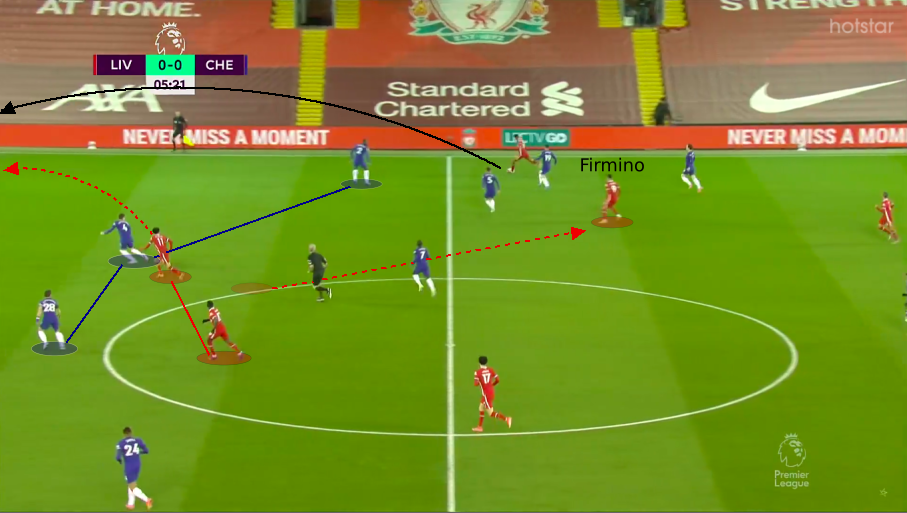 Liverpool relied on long balls to deal the damage too. In attack, they effectively had a front two up top as Roberto Firmino dropped into midfield so that the pacy wingers could run at Chelsea’s often-stretched centre-back trio. 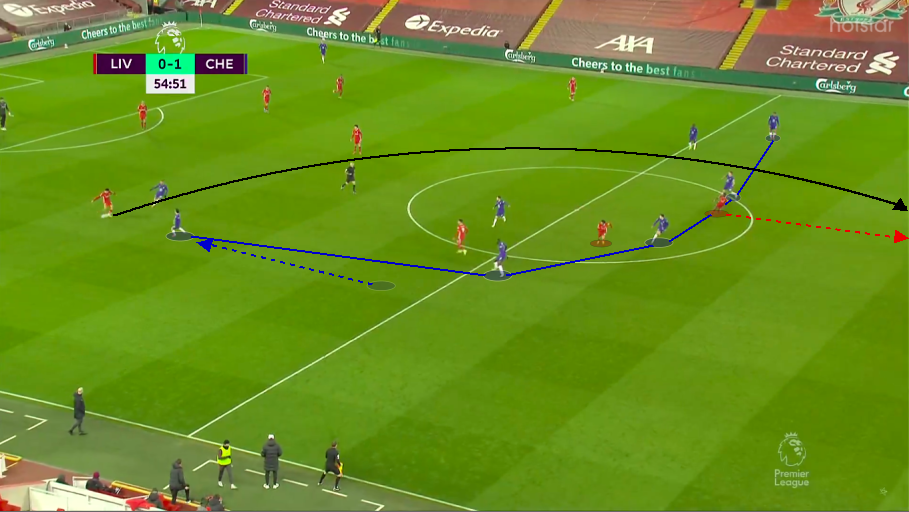 Trent Alexander-Arnold stayed in a three-man backline for Liverpool in possession, so he used his pinpoint long passing to pick out the wingers whenever he could. 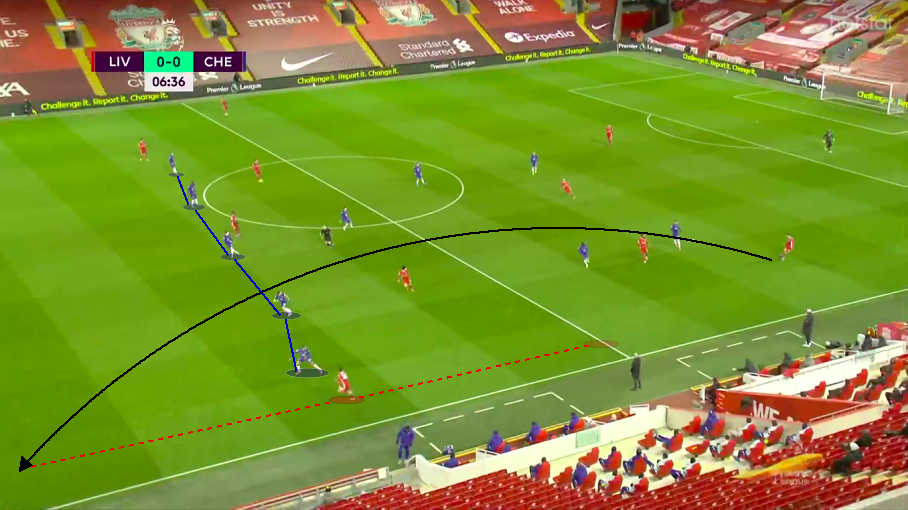 On the opposite flank, Andrew Robertson had the license to push forward, so he often darted down the left flank in a bid to puncture Chelsea’s back-five on its right. 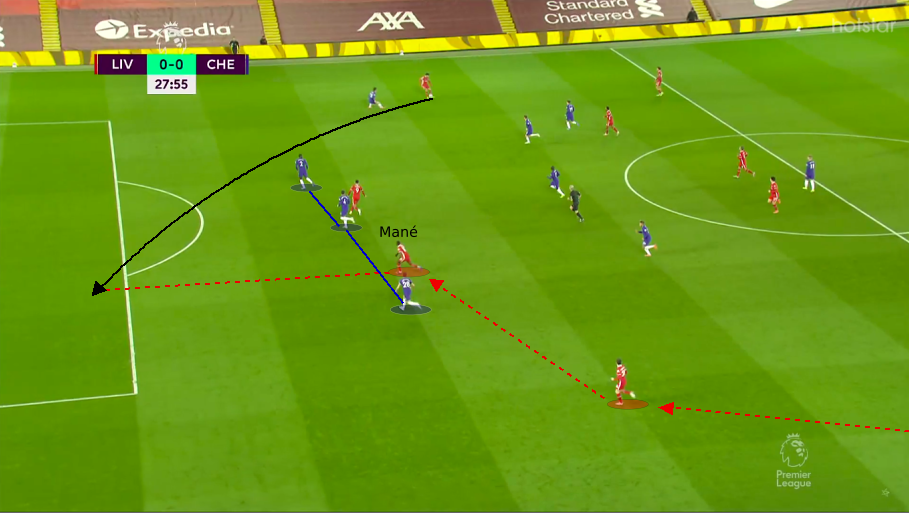 Roberston’s advances also allowed Sadio Mané to tuck inside, so he attacked the gap between César Azpilicueta and Andreas Christensen. 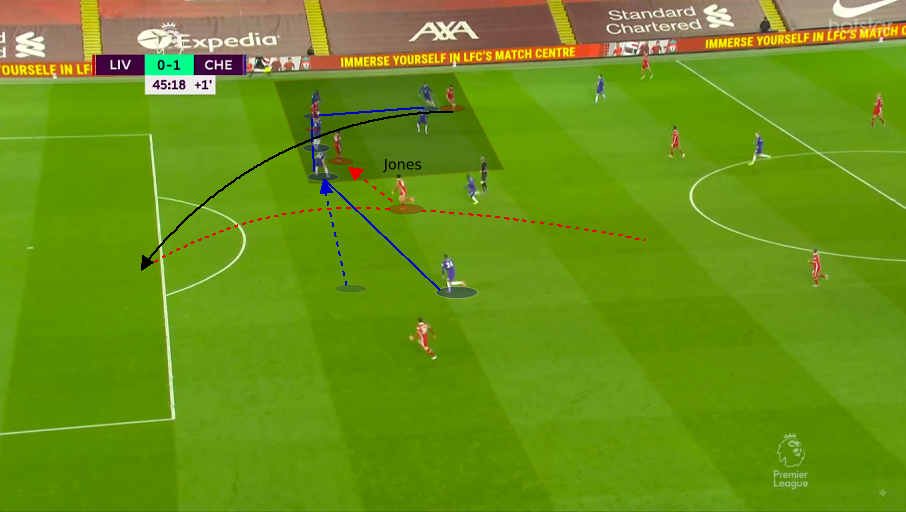 From the midfield trio, Curtis Jones pushed into the attacking line most often. He did so when the front-three overloaded one side (usually the right), taking the three Chelsea centre-backs with them and opening up a massive gap for the young Englishman to exploit.

In the above instance, Salah’s pass did reach Jones, but he failed to control the ball and allowed the keeper to pick up the pieces.

That summed up Liverpool’s match – a story of nearly, but not quite, as many of their long balls did find the attackers chasing them, but no substantial shots were taken.

Although many were questioning Tuchel’s decision to pick Werner as the central striker pre-match, it proved to be another feather in the German tactician’s near-perfect Blue cap.

Neither Fabinho nor Ozan Kabak (who, by the way, formed the 15th different centre-back pairing for Liverpool this season as they met in a Liverpool match for the first time) could live with the ex-RB Leipzig man’s pace, while Mount’s spark of brilliance proved to be the telling difference in this match.

As for Liverpool, their record fifth-straight home defeat was marked by yet another acceptable performance, where the only thing lacking was that final action, which has further diminished their Champions League chances for next season.