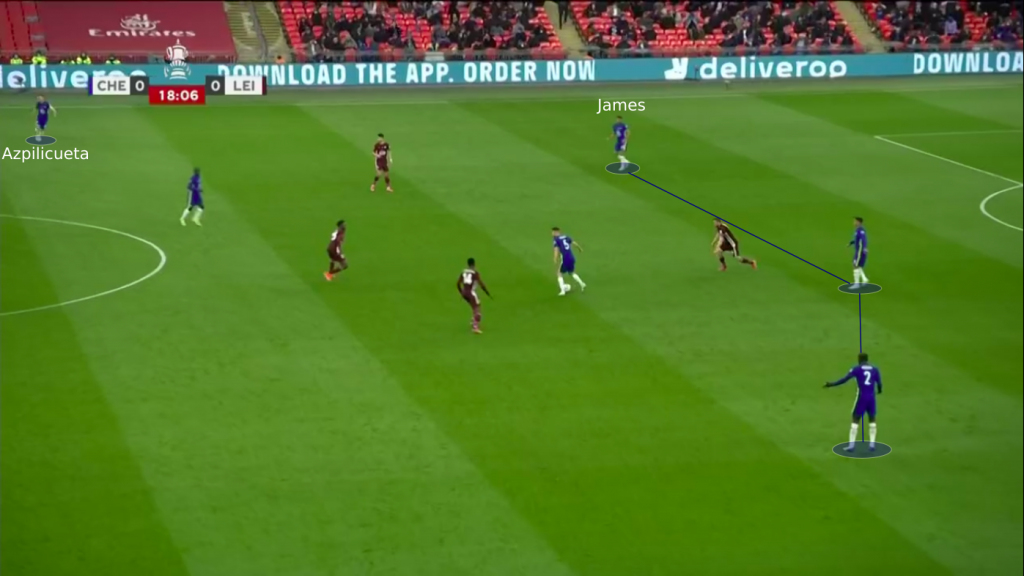 Just more than two weeks before this day in 2016, Leicester City were celebrating a miraculous Premier League title after Chelsea halted Tottenham Hotspur’s title charge for good at Stamford Bridge.

Chelsea’s season had started well under Frank Lampard, but a terrible run of form which saw them slump out of the European spots from the top of the table spelt the end of the English manager’s tenure.

His replacement was German tactician Thomas Tuchel, who almost instantly got a supremely talented squad firing their way back to the top-four and into two cup finals, one of which was the Champions League.

A triumph in the FA Cup final would mean that the ex-Paris Saint-Germain manager delivered near-instant validation for his already-successful appointment in the form of silverware.

Leicester City were flying in the league again, this time looking set to improve on last season’s mistakes by ensuring a top-four finish.

In their history, they had pretty much collected all the major honours that English football had to offer, but the FA Cup had eluded them right at the death on three subsequent occasions since their first final appearance in 1949.

This was by far their best chance to change that, as they returned to Wembley for the big final for the first time after 1969.

After a hard-fought encounter, the Foxes emerged victorious thanks to a Youri Tielemans screamer.

Tuchel’s team selection was pretty unsurprising, minus the absence of Kai Havertz and foretold inclusion of Kepa Arrizabalaga. However, the positions he asked some of his players to take up attracted more intrigue. We will focus on precisely that in this analysis.

Changes on the right of defence

With Reece James and César Azpilicueta both starting, most expected them to be deployed at right wing-back and right centre-back respectively, but in the match, the opposite was true. 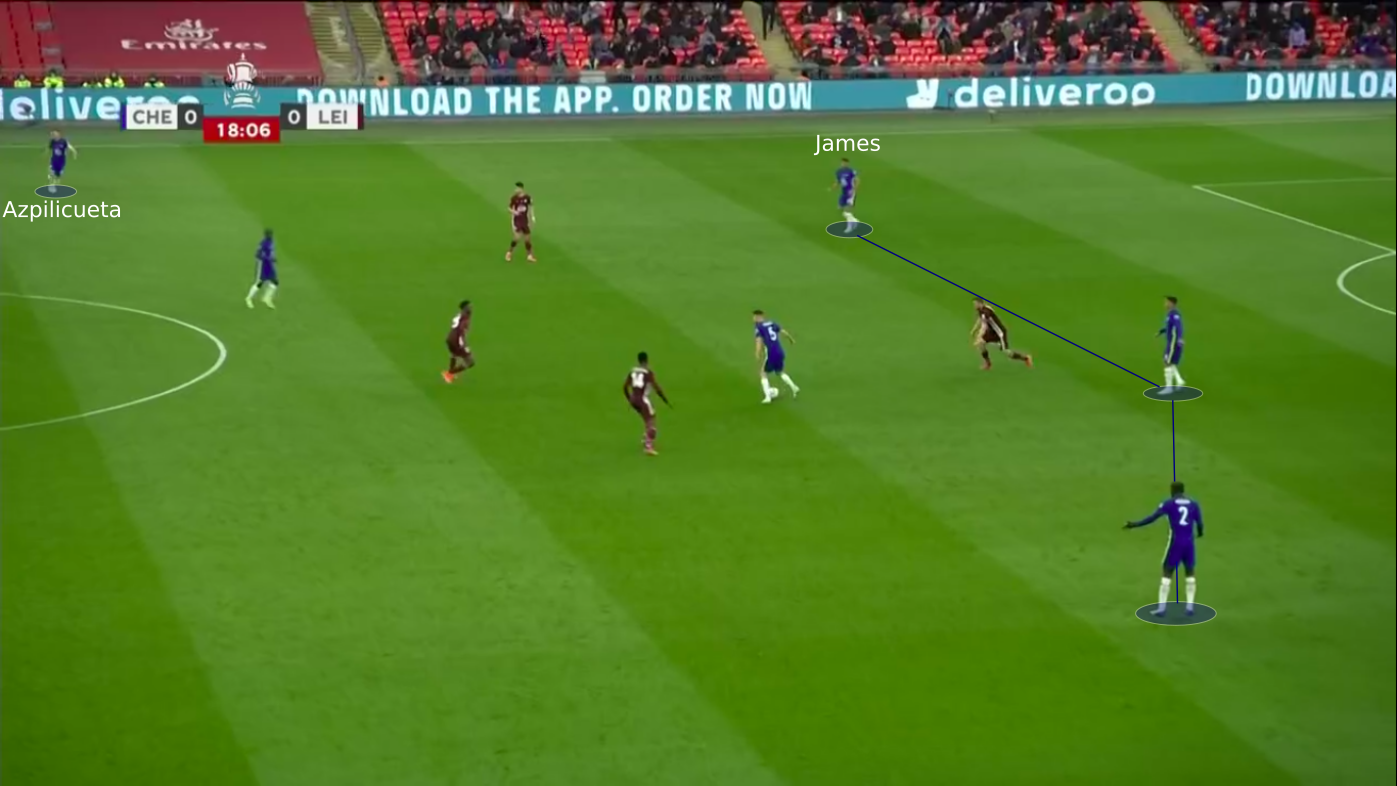 This was presumably done to try and contain Leicester City’s pacy forward Jamie Vardy, but it did have some side effects when Chelsea had possession.

James’ day was not too bad – he made more passes (89) and got more touches (106) than any other player on the pitch. Thanks to his strong involvement in the build-ups, 44% of Chelsea’s attacks came from the right flank.

The problem, however, lay in pushing Azpilicueta up to right wing-back. Of course, this was not the first time he was operating there, but on most previous occasions when he had done so under Tuchel, his main task was defensive in nature as Chelsea faced strong opposition (case in point: Real Madrid in the UEFA Champions League semi-final).

Therefore, in those matches, the Spaniard’s lack of offensive productivity was not such a big issue, as his side did not face staunch defences or utterly dominate possession.

Leicester, on the other hand, were more than happy to let Chelsea have the ball, as they kept only 36.1% of it.

This meant that Chelsea would have to try and break their organised defensive structure down, and for this, a less attacking wing-back proved damaging. 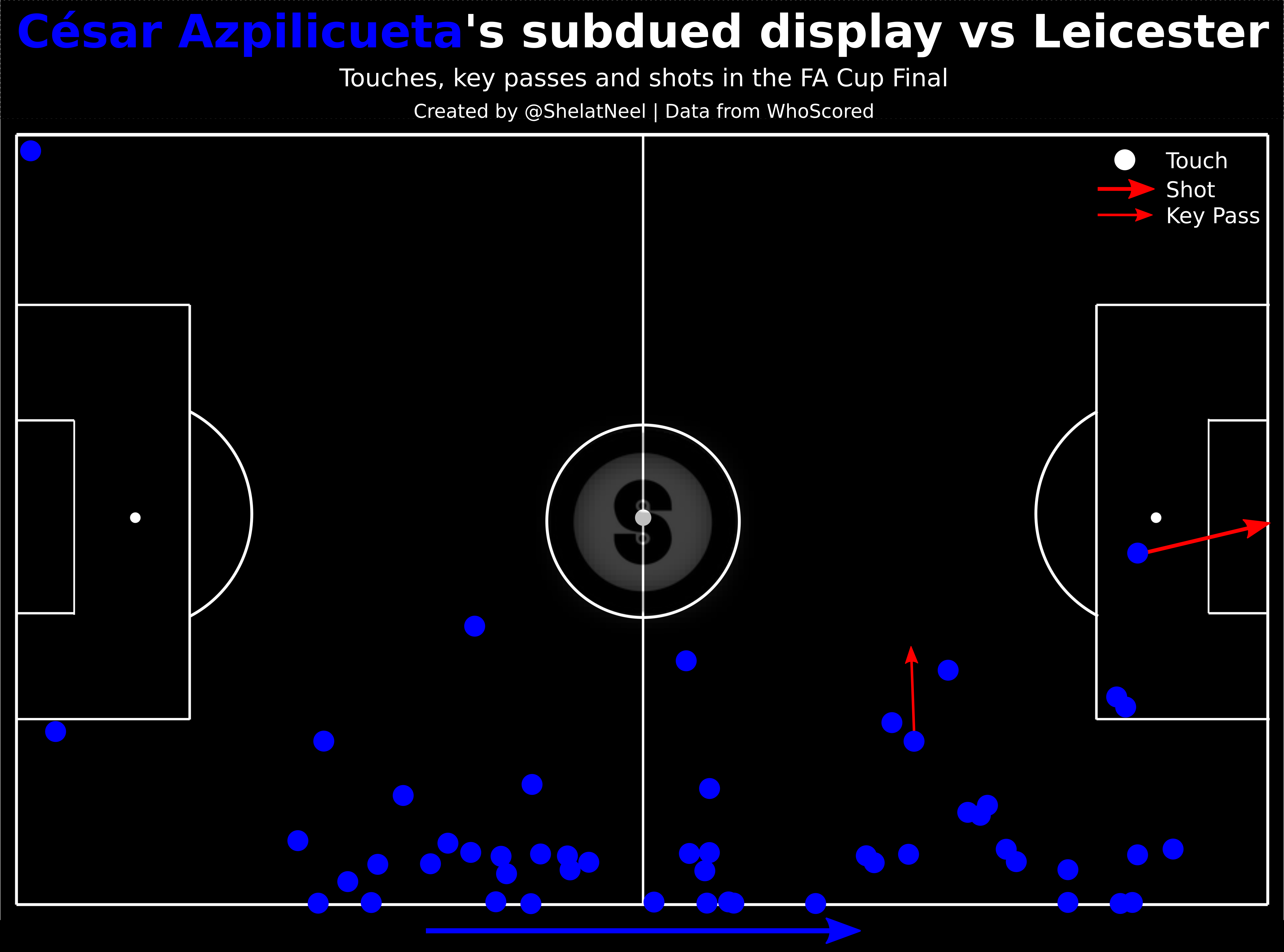 The Chelsea captain managed a mere 28 touches in the opposition half, including just one key pass (miles away from the real danger area) and a solitary shot.

Even in the rare instances when Azpilicueta got into good positions, his end-product let his teammates down: 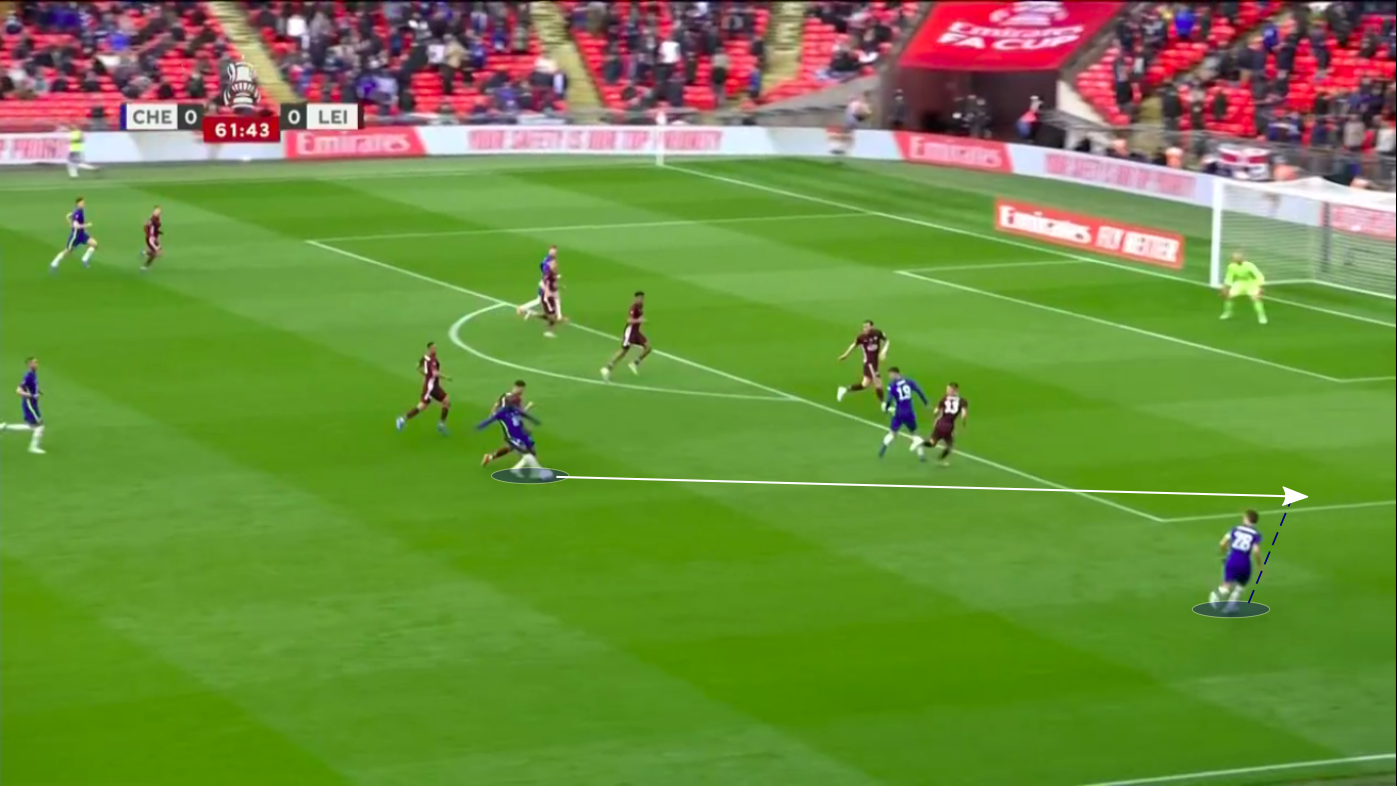 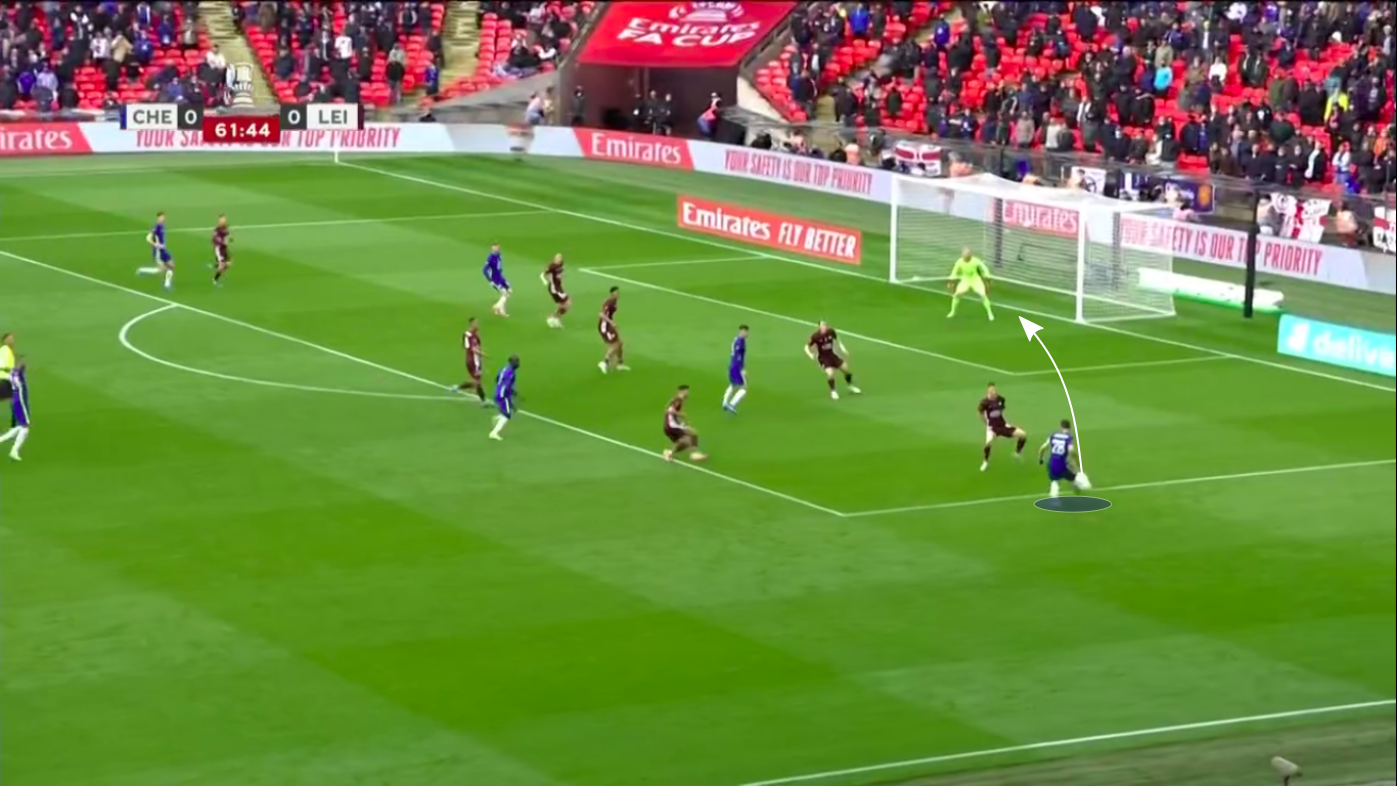 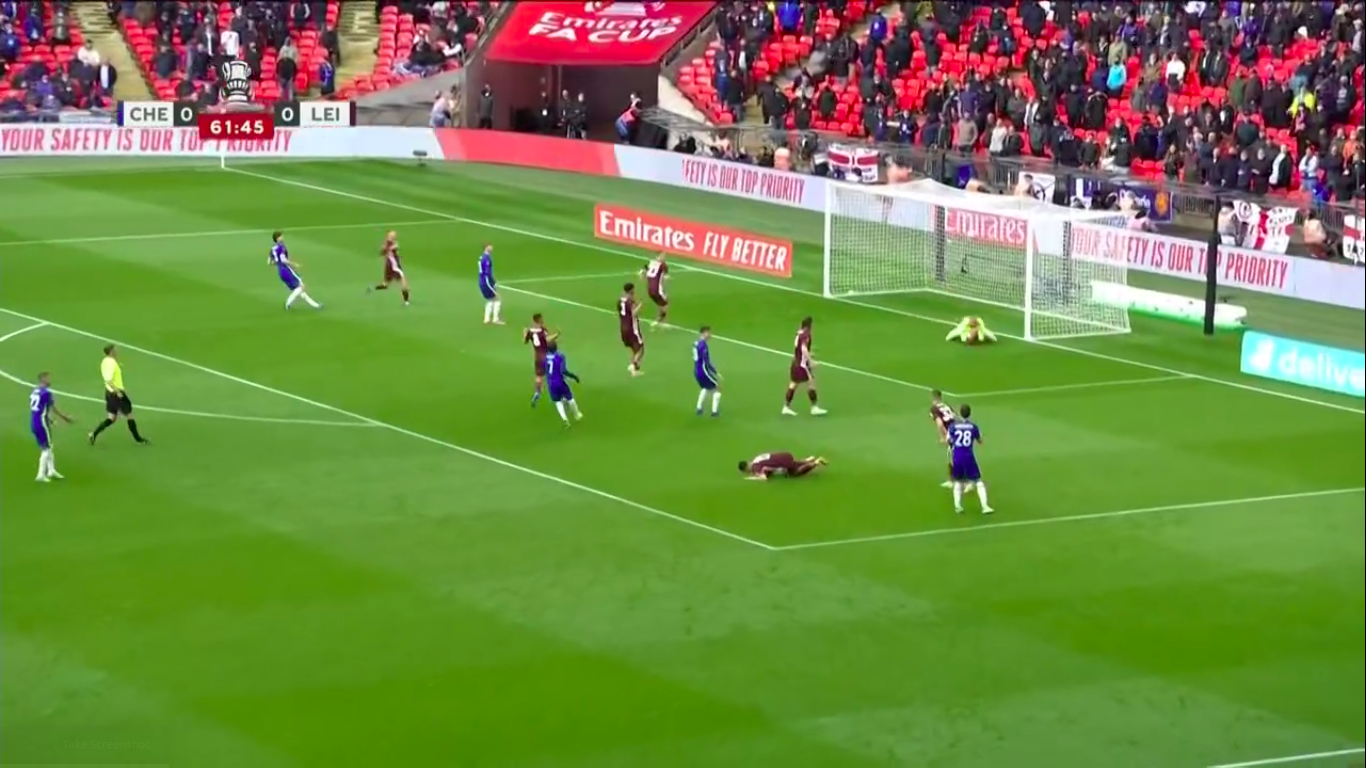 Of course, you cannot always expect pinpoint crosses from a man who is predominantly a centre-back, which is precisely why Tuchel sent Callum Hudson-Odoi on in the 76th minute, but by then, it was a case of too little too late.

The German manager was quite obviously asked about this decision post-match. “We changed the position because we knew about the position of Jamie Vardy,” he said.

“We wanted Reece’s power and acceleration to eliminate the threat. He did fantastic today. I’m very happy.

“If Azpi had scored the goal, it would’ve been a great decision. It was a decision for tactical reasons, and I’m very happy with how we defended in general today.”

While he is right in stating that Chelsea defended well, the same could not have been said about their attacking, which is why using a more attack-minded wing-back or at least sending Hudson-Odoi on earlier might have been more effective.

A similar swap in natural positions was seen further forward up the pitch, as Mason Mount operated on the right and Hakim Ziyech looked to work his magic on the left of attack.

Unfortunately, that did not quite work out, as the two only managed four shots (of which three were from outside the box) and two key passes, as a lot of their combined 104 touches proved to be quite futile in offensive terms.

Had they been operating in their natural positions, things might have worked better for Chelsea: 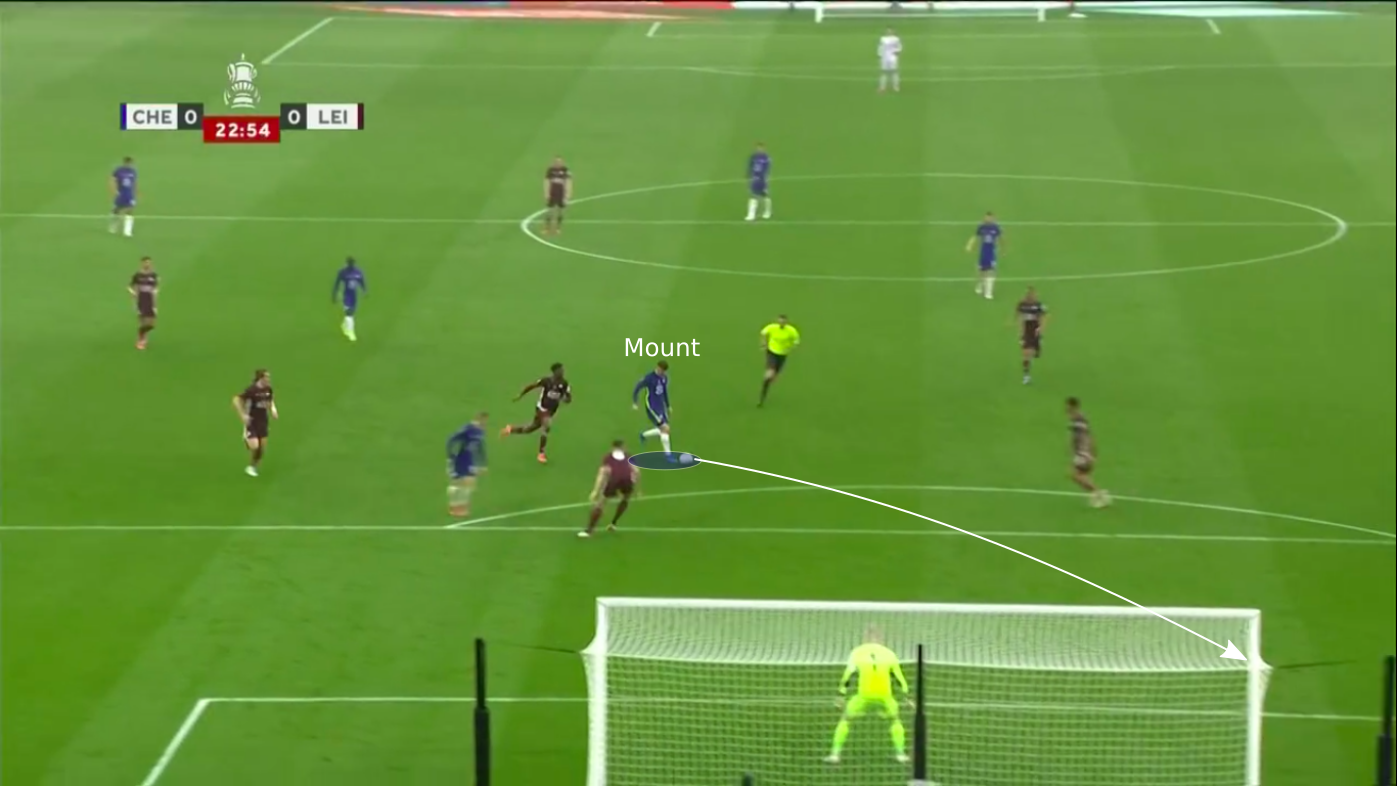 In this case, for example, the left foot of Ziyech would have been able to unleash a curler into the top corner, but Mount could only drag a slightly deflected effort wide on his weaker foot. 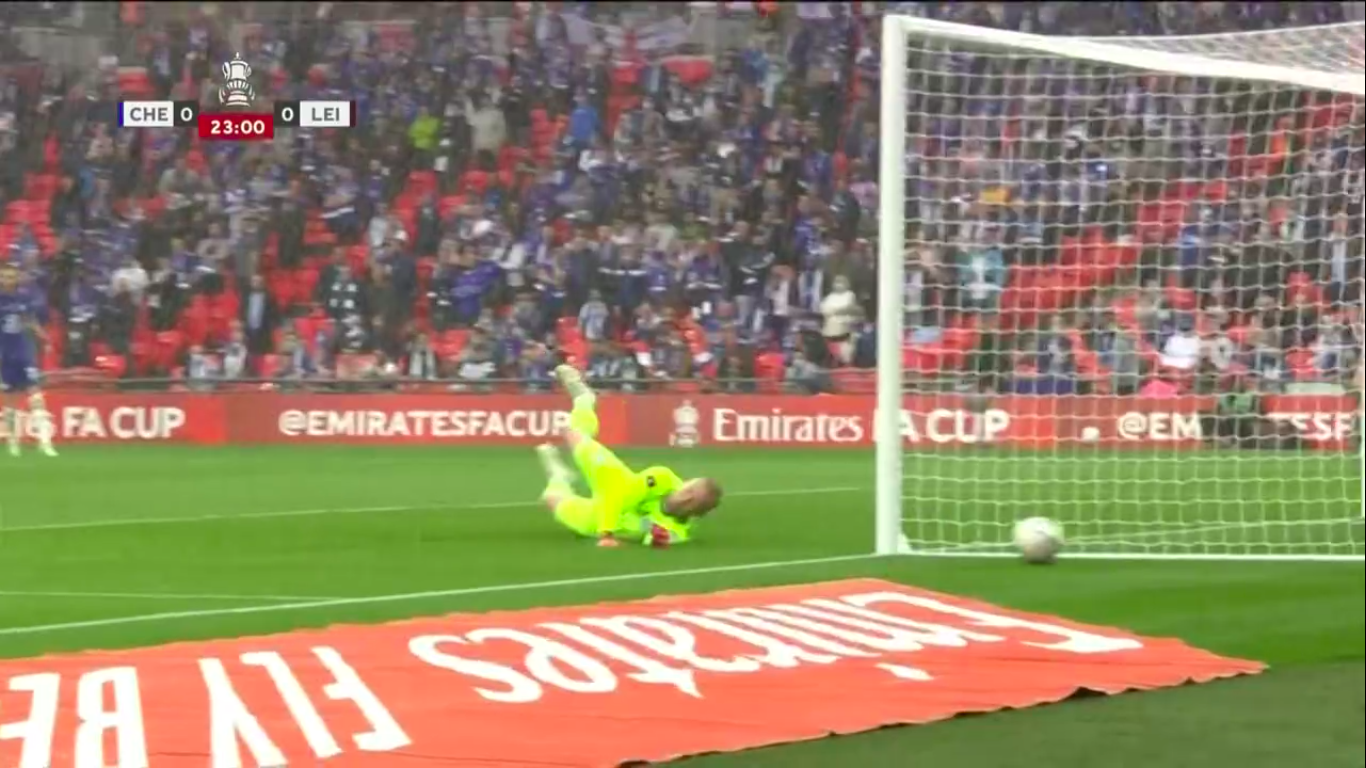 With Christian Pulisic replacing Ziyech in the 68th minute and Kai Havertz coming on for Jorginho in the 75th minute to send Mount into central midfield, Tuchel’s experiment of swapping his inside forwards around evident did not work.

For all of Chelsea’s attacking imbalance, they did get into promising positions, which is why Leicester City’s defenders – particularly Wesley Fofana and Çağlar Söyüncü – were called into action to save the day fairly often, and they delivered every time. 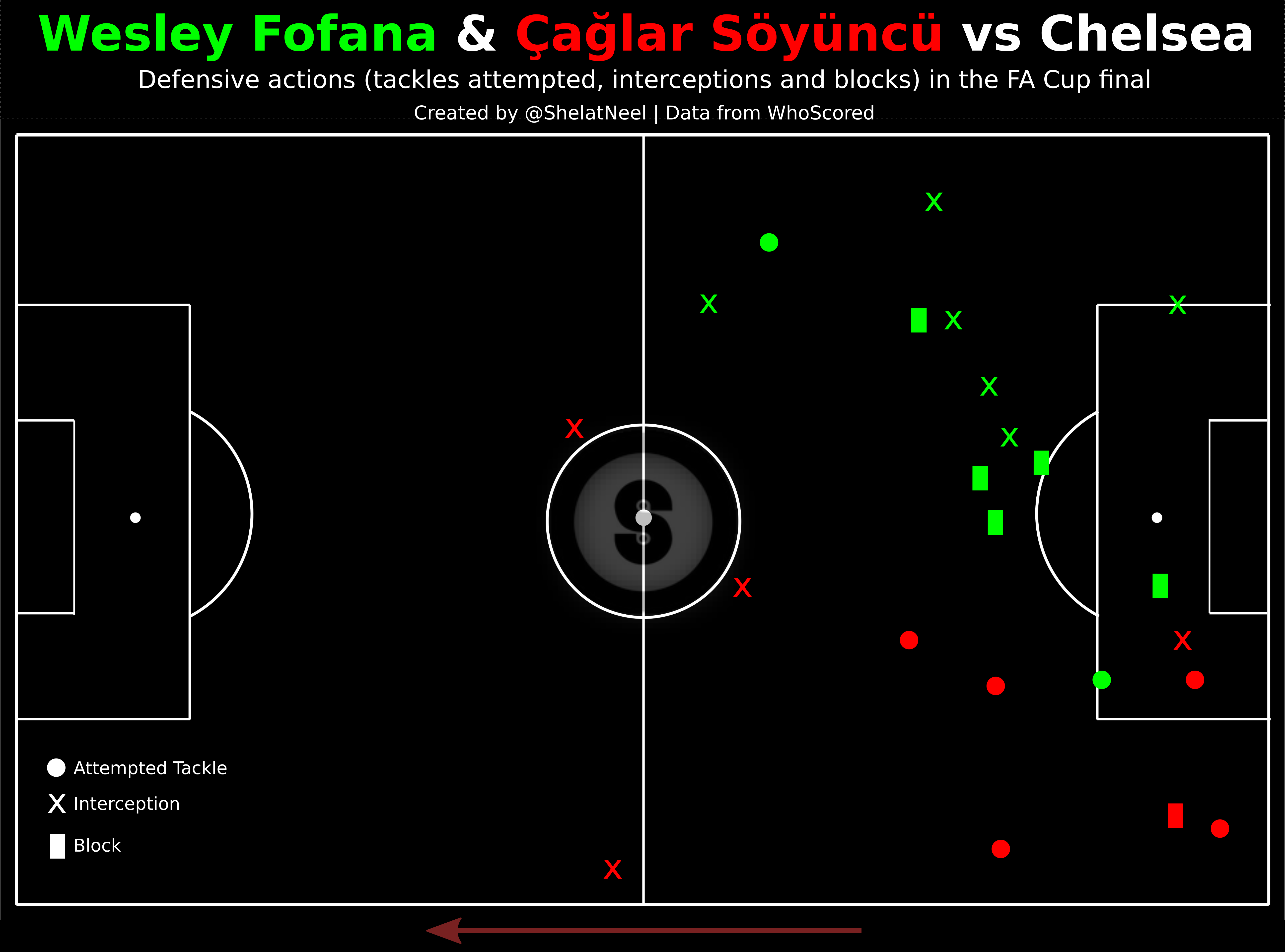 Chelsea were undoubtedly the better side in the overall balance of things, but they failed to pose a proper goal-threat due to their slightly imbalanced attack.

Leicester’s solid defending also proved problematic in this regard, but even then, things might have ended differently on another day had Chilwell started his run a split-second later, but it was not to be.

The Foxes’ goal came, as Tuchel said, from nothing, which rather accurately describes their attacking threat too. Therefore, the ultimate difference proved to be that Leicester had one moment of pure magic in them, which Chelsea lacked.

This is not the first time that Chelsea have looked rather blunt in the final third despite dominating possession under Tuchel; in fact, their last Premier League match against Arsenal was a great example of precisely this.

Of course, Manchester City might not be so happy to sit back in the Champions League final, but this is something that the German tactician will certainly have to work on, perhaps even for his side’s last two league matches where they have to defend their top-four spot, with Leicester set to cross paths once again.