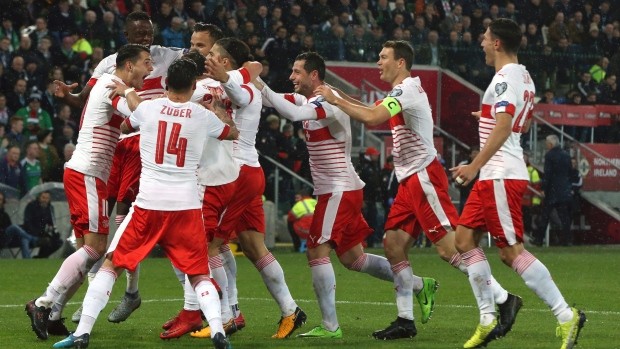 Switzerland qualified for the 2018 World Cup thanks to a controversial penalty awarded in their play-off win over Northern Ireland, but could be a tricky opponent to face should they manage to come through a testing Group E.

Brazil, Serbia and South Korea stand between them and a last-16 place; the Europeans reached the
knockouts four years ago but crashed out in heartbreaking circumstances to Argentina after a goal from Angel Di Maria in the dying moments of extra-time.

Going any further in Russia this summer would be considered a huge success, although the Swiss have some pedigree at this level having last failed to qualify for the finals in 2002.

Having named a fairly young preliminary squad, manager Vladimir Petkovic is clearly hoping to build experience in a team that will probably come into its own at future tournaments.

Stalwarts such as Stephan Lichsteiner and Valon Behrami will know that this is likely their last chance to shine on the world’s biggest stage, whilst Premier League regulars Granit Xhaka and Xherdan Shaqiri will expect to see plenty of the ball in the opponents’ half of the pitch.

Wolfsburg’s Admir Mehmedi played a key role in qualification but will miss out on the finals with a torn ligament in his foot.

It was hoped that the winger would make a recovery from the problem he sustained back in March, but he asked to not be considered given his lack of game time.

The former Lazio boss has been in charge since 2014 and was unlucky that he needed a play-off to ultimately guide his team to Russia.

Switzerland won their opening nine qualification matches, only to lose against Portugal in the final fixture and thus slip to second place.

Born in Bosnia, Petkovic is a naturalised Swiss and leads a squad which includes a number of players who have adopted the country as their own.

Whilst sometimes criticised for his cautious approach, the 54-year-old demonstrated at club level an ability to extract the maximum from the personnel at his disposal, a trait he will need to rely on again this summer if his men are to make an impact on the competition.

Petkovic rarely deviates from his preferred 4-2-3-1 formation, although he may drop another man into the midfield depending on the strength of the opposition.

Shaqiri will provide much of the threat from the right wing, although there is a space in the side on the opposite flank now that Mehmedi is ruled out.

Up front, there is no obvious number nine to lead the line, but youngster Breel Embolo has potential and may get the nod.

Expect Granit Xhaka, often maligned in his deeper role at Arsenal, to be given more attacking license at the World Cup.

Xhaka dictates the tempo in this team but it is Shaqiri who brings the real spark.

His acrobatic goal in the Euro 2016 last-16 defeat to Poland was arguably the best strike of the tournament and exemplified the Stoke City star’s imagination and technical prowess.

The Swiss will look to feed him whenever possible and he could be the difference-maker in terms of getting out of the group.

As stated above, there is no obvious first-choice centre forward in the Swiss ranks, but one man who will be keen to take the jersey is Mario Gavranovic.

The 28-year-old’s 13 caps for his country span over seven years, but he was recently thrust back into contention after finding his feet for Dinamo Zagreb in Croatia this term.

Gavranovic scored 24 times in all competitions for his club in 2017-18 and did his international chances no harm by netting one and setting up two in the 6-0 friendly win over Panama earlier this year.

With a knack for bringing others into play, he could be a good foil for Shaqiri and is arguably the squad’s in-form striker.

Many punters will see the Swiss as second favourites behind Brazil to qualify from Group E, although Serbia should provide a stern test in their second fixture.

Realistically, they will be happy to take the runners-up spot but will not be expecting to
progress much beyond that, having last made a quarter-final in 1954.