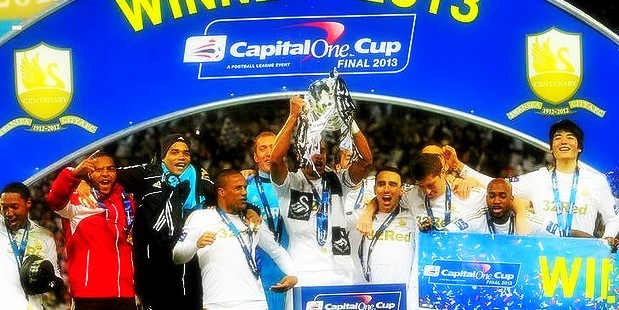 Swansea celebrated a historic night on Sunday as the Wales side won their first major trophy in their 101-year history, the League Cup, after eviscerating League Two side Bradford City 5-0 in a one-sided final at the Wembley Stadium.

Manager Michael Laudrup hailed the victory as the greatest achievement in his managerial career. As a player, the Dane earned laurels and distinctions with clubs like Juventus, Real Madrid and Barcelona but he feels this achievement as one of the very best as the joy of winning something with a “smaller team like Swansea” is something special to him.

Swansea are one of the well run and well administered club in Britain and their success story is a culmination of constructive thought processes and hard work laid by past managers.

Current Wigan manager Roberto Martinez was the prime architect who first implanted his own vision in the side, sculpted the squad according to his taste and introduced an identity in the way the club played football.

Current Liverpool manager Brendan Rodgers carried on the good work of Martinez and gave them stability and a platform at the highest level in English football – the Premier League. Laudrup perfected it and took it to a different level altogether.

Credit should also go the administrative process for their managerial selections. These managers were highly talented but relatively inexperienced when they took the job. Further, what is admirable is the club has been able to replace those managers perfectly who left for better prospects after taking them to a certain level.

It is not always easy to find managers who can step by step guide the club to a new level carrying forward the work of their predecessors.

Probably what makes Laudrup’s work more appealing is he didn’t just use the current template laid by his previous managers, but inculcated his own philosophy in it and blended it perfectly, giving the side a European flavour and style.

For instance, Swansea under Rodgers were brilliant in having ball possession and playing tiki-taka style of passing game that earned the tag Swansea-lona. However, the central focus of Swansea attack was centered on Danny Graham, who being a typical British striker made the attacking force a bit one dimensional.

By signing Michu, who is a brilliant attacking midfielder, Laudrup showed the temerity of playing him as a striker in a more of a false-nine mode. Very few managers in the world have the guts to do that, especially with such a team.

When hard work yields success, nothing is more pleasing than that. In this case, it is not that the credit goes to one particular man only or the team, but the entire thought process that started ten years ago.