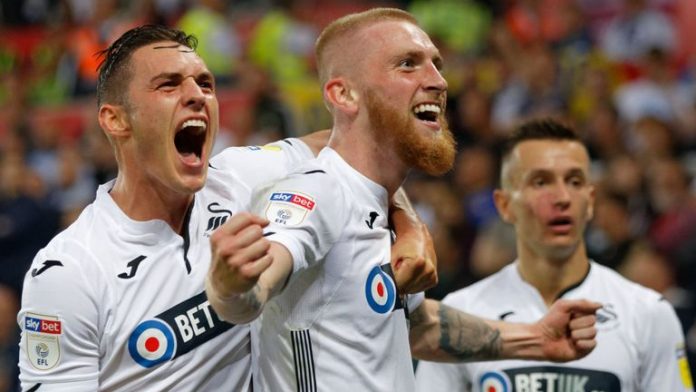 Swansea City host Queens Park Rangers on Saturday aiming to move back into the top half of the Championship.

City head into the game 13th in the table, but with just five points between them and top-of-the-table Leeds United a win this weekend would be a major boost.

The bookmakers have Swansea at 13/10 to beat QPR, and those odds could prove tempting against a side who have won just once away from home this season.

The Swans’ injury problems are beginning to ease and manager Graham Potter may soon have a fully fit squad to choose from.

Jay Fulton and Tom Carroll were both on the bench at Middlesbrough last weekend and are pushing for a place in the starting XI after recovering from their respective injuries.

Bersant Celina and Leroy Fer returned to training this week, although Potter may delay their return to the team.

Joel Asoro will miss the game after picking up an injury while playing for the under-23s against Villarreal B in midweek, although it is hoped he will be in contention to face Wigan Athletic on Tuesday.

QPR midfielder Jordan Cousins will miss out through suspension, serving a one-match ban after being sent off against Blackpool in the Carabao Cup.

Swansea will be hoping for better luck in front of goal against the London club after failing to find the back of the net in their last three games.

Potter’s side created a couple of decent chances in last week’s 0-0 draw at Middlesbrough and they need to find their scoring touch over the coming weeks.

Rangers’ recent upturn in form was ended last Saturday as they were beaten 1-0 at home by Norwich City and they followed up with an embarrassing 2-0 defeat at Blackpool during the week.

Swansea have held the upper hand over QPR in recent times, winning three and drawing one of their last four meetings.

The two sides last faced each other in the Premier League during the 2014/15 season. Swansea won 2-0 at home before picking up a 1-1 draw in the reverse fixture.

QPR are priced at 9/4 to win this weekend, with the draw on offer at the same price, but the home side to win to nil at odds of 5/2 looks the call in this one.

Back the winner of Swansea v QPR and get a free bet – click here to get started.