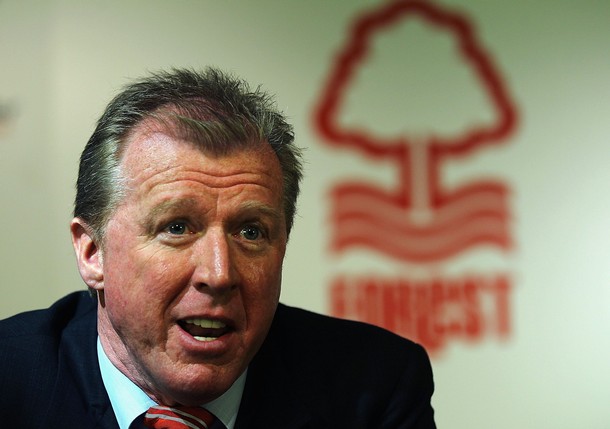 It has been 1305 days since Steve McClaren stood sombrely alone clutching the handle of an umbrella on a rain-sodden night at Wembley as the England national team failed to qualify for the 2008 European Championships – beaten at home by Croatia. Many lessons were learnt that night, none more so for the man who failed to fulfil his obligation of qualifying for the tournament in Austria and Switzerland. As McClaren was sent packing by the bigwigs at the FA, he quietly re-established himself as a coach and is now back in the domestic English game hoping to propel Old Big Head’s Nottingham Forest back into the promise land.

It would be totally unfair, as to any previous Forest manager to make comparisons to the late great Brian Clough. The man who in the space of five years created arguably the greatest footballing miracle English football has ever seen by modelling a modest second division club to the kings of Europe, not once, but twice. There are not enough superlatives to portray how monumental an achievement that was but we are now living in a completely different era where money dictates the progression of the sport.

It has been 12 years since Forest were relegated from the Premier League. A period that has seen the club fall into the third tier of English football along with a number of disappointments in the play-offs. A far-cry from those glory days under Cloughie and his assistant Peter Taylor in the late seventies and early eighties.

Former manager Billy Davies flirted with promotion during his time. He has assembled a talented side mixed with discipline and a sprinkle of flair but just failed short of a successful promotion – leading to the termination of his contract last Sunday. Club Chairman Nigel Doughty had no hesitation in turning to McClaren as his successor and believes he is the man to gather the momentum to push them into the holy grail of England’s top-flight.

McClaren has been severely ridiculed by the English press and fans alike for the best part of four years since that dreadful night at Wembley. As the FA were left to pick up the broken pieces, as was McClaren who revaluated his career and took bold action by rebuilding his damaged stock.

He decided to dip his toe overseas with Dutch club FC Twente and within two seasons led them to their first Eredivisie title in 2010, thus becoming the first English manager to lead a club to a top tier domestic league title since Sir Bobby Robson with FC Porto in 1996. No mean feat by any stretch of the imagination to overcome the likes of Ajax, PSV Eindhoven or AZ Alkmaar yet the Yorkshireman assembled a side littered with top level attributes. Not to mention important changes in his personnel as the likes of Eljero Elia and Marko Arnautovic sought pastures new. McClaren himself has ambitions and upon leading Twente to their one and only league title, he opted to try his hand in Germany with Wolfsburg which would ultimately prove to be unsuccessful and was released from his duties earlier in the year.

Nevertheless despite that setback, Forest have hired a man who is undoubtedly a capable of fulfilling their aspirations. The 50-year old showed tremendous courage to at least have a crack in a progressive league such as the Bundesliga and although his time there was dreadfully flat, he will have learnt lessons from the experience. One thing that is striking about the man is his will to succeed and that will work in the favour of his new employers who possess a manager itching to redeem himself – especially in his homeland.

He was in high spirits during his inaugural press conference as Forest boss. It was clear by his beaming smile that he is honoured to be managing a club with such rich history and tradition – echoing it with a glint in his eye absorbing the prestige of the club as two European Cups sat not too far from him in the City Ground.

Although he has taken a step-down from the top tier leagues in Europe, the man who once played at Forest’s local rivals Derby County had no hesitation in taking the job. He will implement his ethos into the club, which he hopes will get them back in the big time.

“I had no hesitation about managing in the Championship, it’s very competitive and very well respected abroad.”  he told the on looking press.

“I could have waited, I could have taken up offers I had from abroad, but I like a challenge. I am willing to take risks, that’s why I fall flat on my face sometimes.

“Getting Nottingham Forest into the Premier League is a big and difficult challenge, but I don’t fear it. English football is the best league, the best football, the most passionate, everyone from abroad wants to play here. It’s where you want to coach, manage or play.”

It is apparent a huge lure to the football club for McClaren was the history it beholds. He will be looking to use past glories as inspiration to re-establish Forest as a competitive force.

“I walk into Forest and the boardroom and there are two replica European Cups still there and all the trophies and you see in the pictures.”

“This club is very well known in Europe. People in Germany and Europe are texting me about what a great club it is. We need to embrace what is here. You can’t forget it, that is the inspiration, that is what can be achieved.

“It’s a great feeling, especially coming here. You can smell the history and tradition of this football club. I’ve been abroad for three years. I wanted to get back into English football.”

It is a prosperous challenge for McClaren to grasp and get his teeth into. The thrill of being back in the English game with such a renowned club is an exciting prospect for the former England coach and will look to steer The Reds back into the higher echelon of the Premier League.