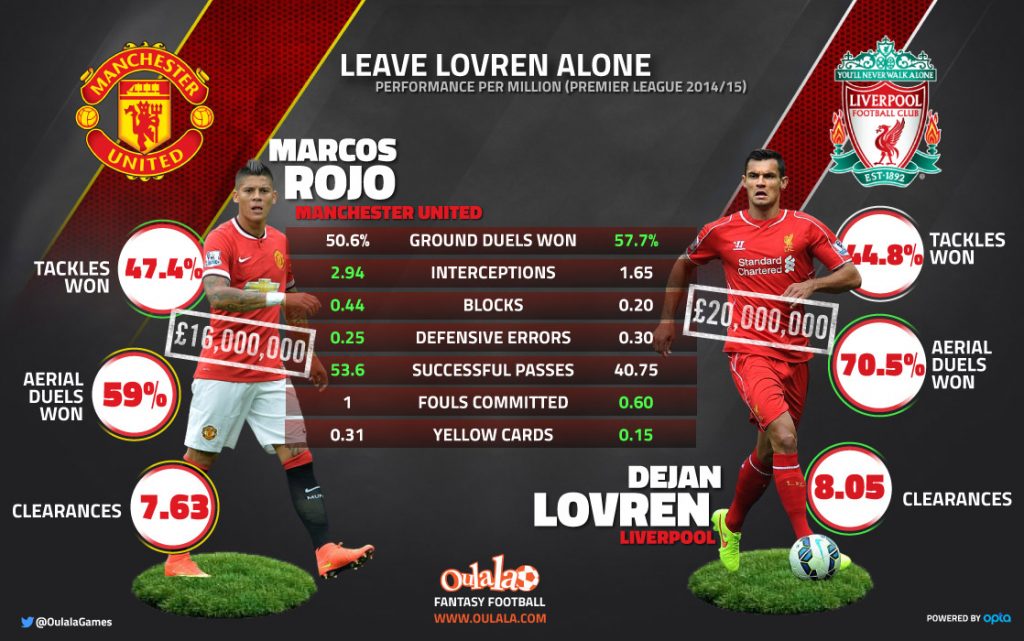 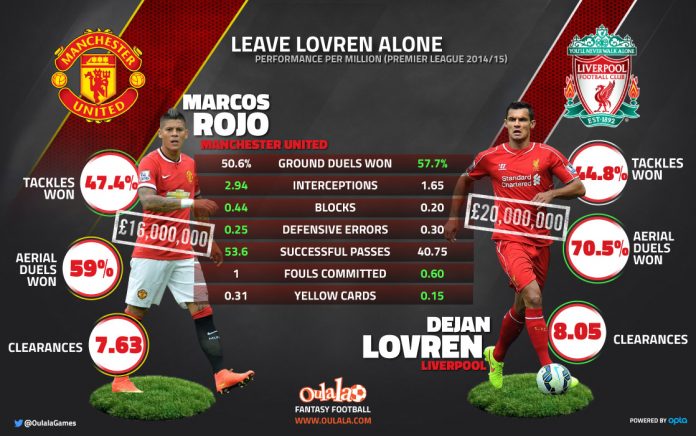 When Southampton defender Dejan Lovren moved to Liverpool for £20m last summer many questioned the hefty price-tag in the early stages of the season after the Croat failed to impress. Ex-Red Mark Wright labelled the fee ‘excessive’ while some went as far as calling the 25-year-old ‘Liverpool’s worst ever signing’.

Nearby in the North West during the close season, rivals Manchester United had picked up Argentine defender Marcos Rojo from Sporting Lisbon for £16m. Since his move the 24-year-old has won rave reviews on how quickly he has adapted to the Premier League with some superb performances.

Two defenders, similar fees, similar ages and a similar amount of playing time in the Premier League this season (Rojo’s 1,405 minutes to Lovren’s 1,434 minutes) yet two contrasting views about their performances and only one price-tag being questioned.

Has there really been such a big difference between the two players? Opta-powered fantasy football game Oulala decided to take a closer look at their performances this season from a cost per million angle, the results were surprising.

Looking at the data it is clear that Marcos Rojo is an accomplished defender. Per million the Argentine has won 2.94 interceptions, made 0.44 blocks, completed 53.6 successful passes and won 47.4% of his tackles. He has also made 0.25 defensive errors per million. With Rojo outperforming Lovren in five areas it was time to focus on the Liverpool man.

The Croatian’s stats are just as impressive, fighting back with 70.5% of his battles in the air won, 57.7% of his ground duels won, 8.05 clearances, 0.6 fouls committed and 0.15 yellow cards per million. Thea 25-year-old has outperformed Rojo in five key areas himself.

With the pair inseparable from a price against stat breakdown this season, is the criticism that has been aimed at Dejan Lovren truly justified?