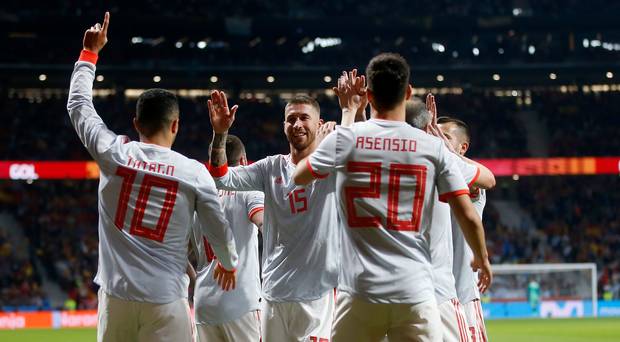 Spain, the 2010 world champions, have undergone a gradual transformation since lifting the trophy in South Africa.

Their showing at the last two major tournaments has been disastrous by their own tiki-taka propelled high standards, but the Iberian nation are among the favourites once again.

Recent form under Julen Lopetegui, including a 6-1 thrashing of Argentina, would suggest the tag is justified.

Selected from a vast array of talented Spanish players employed at the very top clubs in La Liga and beyond, the Spanish 23 is among the strongest on paper ahead of the tournament.

A core of experience from their 2010 success remains in Reina, Ramos, Pique, Busquets, David Silva, and the revered Andres Iniesta, who recently elected to call time on his stunning Barcelona career.

This winning pedigree is coupled with a new generation of world-class talent and Champions League pedigree, including potentially match-winning goalkeeper David De Gea.

Such is the strength is depth available, Spain could probably have named two squads capable of challenging for the title. It was inevitable then that top-class players would miss the cut.

The former goalkeeper has yet to lose a match in charge of La Furia Roja since being appointed after Euro 2016.

His regular involvement as a coach in the international set up at various levels since 2003 gives him a superb knowledge of his players and invaluable experience.

The 51-year-old has naturally downplayed his side’s chances amid growing confidence in the Spanish press, insisting they must simply focus on their group opponents.

Lopetegui has not been afraid to experiment and introduce variation into Spain’s game plan in order to reinvent them as a dominant force.

The basic principal of dominating the ball, which of course his star players embrace, will remain but the formation is malleable.

The qualifying campaign would indicate a 4-2-3-1 is the most likely set-up with Real Madrid’s Isco afforded the central role of the three behind the striker, despite the presence of Iniesta and David Silva on the pitch.

Further back, Pique and Ramos will provide a solid foundation, even if a back three is used. Busquets will almost certainly be one of two deeper-lying midfielders.

His involvement in Mo Salah’s injury in Saturday’s Champions League final once again painted Ramos as the villain of the piece – something he’s more than comfortable with by now.

The 32-year-old has made the transition from energetic youthful utility man to commanding centre-back in a trophy-laden Real Madrid career.

He will captain Spain at the tournament and regardless of his unpopularity outside of the Santiago Bernabeu, he is a serial winner of the biggest prizes. His propensity to a red card is arguably his only weakness.

Another Real Madrid man, Asensio is one of few in the squad under 25.

Lopetegui is likely to turn to his energy from the bench later on in matches – the versatile attacker is an exiting and clever attacking midfield option with game-changing shooting ability.

Considered narrow third favourites to lift the trophy behind Brazil and Germany, it could be suggested that the bookmakers are underestimating this side given their recent form and the squad’s undoubted quality.

The opening contest with Portugal will be key, as a win should ensure Spain top the group and secure an easier path to the latter stages. Expect them to reach the semi-finals at least.