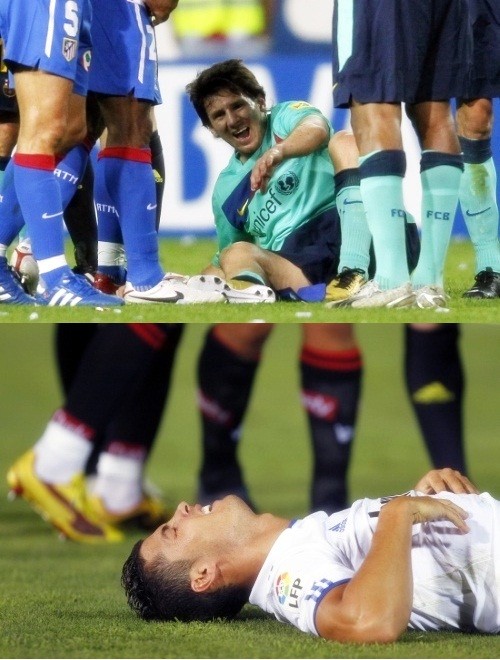 Protection. It seems to be a word that almost defines itself, and yet in Spain, despite being nearly identical in appearance and pronunciation – protección – the very mention of it in the footballing arena can cause a stir.

For some people in Spain the word ‘protection’ pretty much sums up what are often seen as the the two biggest problems in La Liga; Real Madrid and Barcelona. For others, it is a word that could be used to help protect the beauty and grace of the Spanish game and ensure it stays more a ballet than a battle.

Essentially the argument boils down to whether or not referees in La Liga should do more to ‘protect’ the star-players, or whether they should simply treat each individual as they come and not show any preference.

Whichever way you look at it and whatever your opinion, ‘protection’ is a big-deal in Spain, and never more so than when Messrs. Ronaldo and Messi are involved.

On Sunday night it was the turn of the Argentine to reopen the debate as he was rather savagely crunched by Atletico Madrid’s Tomas Ujfalusi in the dying moments of the match at the Vicente Calderon. The end result of the tackle was a straight red card, subsequently followed by a two-match suspension, for the Czech defender, and a painful end to the match, followed by at least a ten-day lay-off, for Messi.

The following days papers were filled with widespread condemnation of the drama in the capital and Marca even devoted the majority of its front page to showing the incident in all its goriness.  David Villa declared that Ujfalusi should ‘think better’ before he does something like again, whilst Pep Guardiola ironically stated that if Atletico continue to play with the same ‘aggressive’ nature as shown against Barca they could ‘fight’ for the league.

Perhaps the most interesting of the quotes in the aftermath though was from Atletico Madrid coach, Quique Sanchez Flores, who said that this kind of reaction only happens when damage is inflicted to the likes of Messi or Cristiano Ronaldo.

Indeed, it is hard to imagine that the reaction to Ujfalusi’s tackle would be quite as targeted and focused were a player from Racing Santander or Osasuna on the receiving end instead of a Barcelona star.

When the two-match ban was finally handed out to the Czech defender few seemed to argue with the sanction and it seemed like the debate might yet again go dormant for a week or two after a couple of days on the front pages. However, within a matter of hours there was drama again, this time at the Bernabeu, as Espanyol defender Ernesto Galan was shown a red card for a tough tackle on Cristiano Ronaldo.

Whilst there is little doubt that the challenge was far from a decent one, it is worth looking at it like Quique Flores and questioning whether the referee would have made the same decision had the man rolling around on the floor not been Snr. Ronaldo.

Protection, defined by those who wish to see it ruthlessly enforced on the Spanish game, would see much softer tackles than the one committed by Galan last night lead to an expulsion and could also benefit more the likes of Madrid and Barcelona who have in their ranks a greater wealth of ‘star-players’ than most other sides.

On the other hand, should tackles like that by Ujfalusi on Messi be dealt with by a yellow instead of a red card, then the result could be ‘targeting’ of players and also potential injury concerns for those receiving the challenges.

Either way, the protection debate is not one which looks set to end any time soon and with the first ‘proper’ round of the Copa del Rey pitting the likes of Real Murcia and Ceuta against Real Madrid and Barcelona there could soon be yet more food for thought…