The Serie A title race seems to be heating up as Juventus were pegged back by an inspired AC Milan side. In what was a weekend full of goals in the Italian top flight, both AS Roma and Milan kept up the pressure on leaders Juve, while Frank de Boer looks to be on the brink as his Inter side slumped to another defeat.

Here are the talking points from week nine of Serie A:

18-year-old Manuel Locatelli has made the right noises ever since his Milan debut against Sampdoria last month. And in his first San Siro start for the Rossoneri, the young Italian scored a screamer to settle matters between his side and the champions, Juventus.

For Juve, it was another unhappy visit to Milan as they have now lost both their San Siro games this season, first a 2-1 defeat to Inter, followed by the 1-0 loss to Milan. The Old Lady’s lead, which seemed insurmountable only last week, is now cut to only two points. Milan will hope to kick things up after their fine win.

Here is Locatelli's screamer that won Milan the game against Juventus! He is 18-years-old ladies and gentlemen. #MilanJuventus pic.twitter.com/s7armBQjQi

Relegation-battlers Palermo lost 4-1 at AS Roma’s Stadio Olimpico as the Rosanero succumbed to their fifth defeat in nine matches. Edin Dzeko scored his fourth goal in three games as Roma had a fairly comfortable evening.

8 – Edin Dzeko has scored eight goals in this Serie A, as many as in the last season. Bomber. #RomaPalermo

Following a breathless week in which they beat Napoli 3-1 away and drew 3-3 with Austria Wien in the Europa League, Roma were happy to face a toothless Palermo side that started the game week in 18th place, and dropped to 19th by its end. Roma are now two points behind Juve at the top.

Frank de Boer‘s Inter lost their fourth game in the space of a month, as they crashed down to earth after a seemingly morale-boosting Europa League win over Southampton in mid week. Two goals from Andrea Masiello and Mauricio Pinilla (either side of Eder’s equaliser for Inter) made sure Atalanta continued their fine run of home wins against top teams this season.

Inter slipped to 14th in the table with their latest loss, as De Boer is now perilously close to being sacked. He said: “I don’t know,” when quizzed post-match whether he sees himself in the dugout for Wednesday’s game against Torino.

Fiorentina put aside their goalscoring troubles in the league for once as they stormed to a 5-3 win at Cagliari. Nikola Kalinic‘s hat-trick and Federico Bernardeschi‘s brace guided La Viola to a 5-1 lead by the 53rd minute, but Cagliari showed some fight with two set-piece goals. Those were not enough for the hosts, as Paulo Sousa‘s men have now won back-to-back away games in a week following a winless streak on the road to start the season. 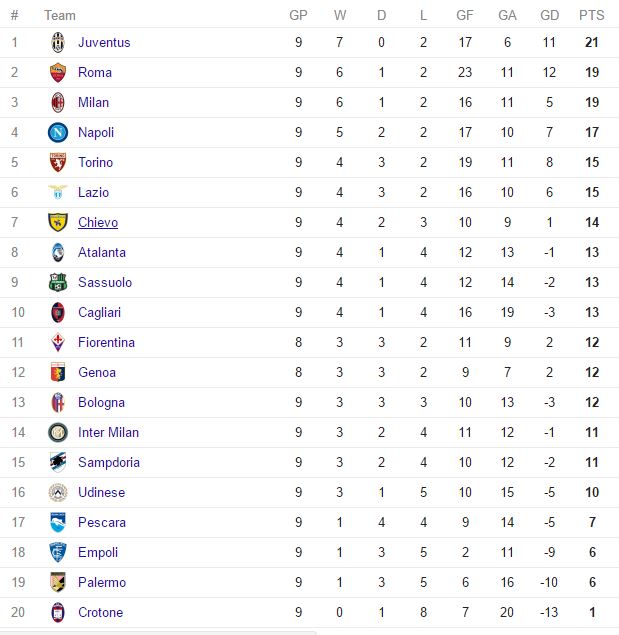