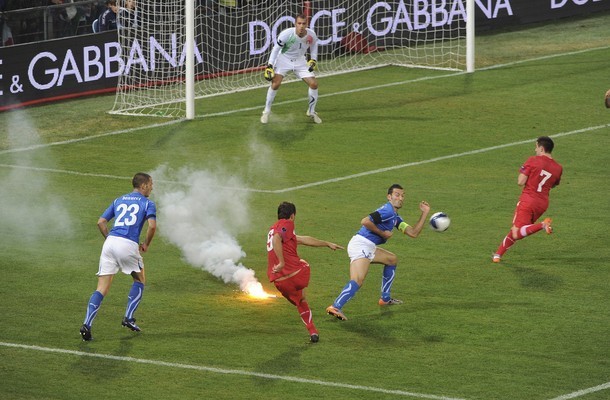 The Euro 2012 qualifier between Italy and Serbia had to be abandoned after just six minutes following crowd trouble in Genoa.

The game in actual fact been postponed for thirty-five minutes prior to kick off as trouble mounted in the away end of the Stadio Luigi Ferraris (home of Sampdoria) where Serbian fans were cascading flares onto the pitch resulting in police intervention.

The Azzurri and the Serbians had originally lined up for their national anthems, only to be sent back into their respective changing rooms, hoping for the chaos to boil down.

Riot police had to tolerate a vast amount of abuse from the Serbian fans who continued to wreak havoc by vandalising parts of the stadium and continuously launching objects at police, ground staff and into the north stand of the ground where Italian supporters were sat.

A number of fans in particular, who were wearing masks to protect their identity, were cutting through mesh fences and smashing glass.

After the delay both sets of players returned to the field and lined up for their national anthem – with the Serbian fans roundly booing their own.

Enough was enough for Scottish referee Craig Thompson who brought the game to a halt after just six minutes as he feared for the safety of the players and supporters as fire crackers/flares continued to flood the pitch.

Italy are now set to be awarded a 3-0 default victory.

Serbia supporters had been causing a number of disturbances throughout the course of the day with Italian police clashing with a minority near the team’s hotel. Matters had then escalated into pure pandemonium in the build up to the actual game.

Roberto Massucci, Italian security chief, believes that the Serbian authorities must take full responsibility for the shameful scenes. He believes that such violent fans should have been prohibited from attending Genoa.

“Fans that are so dangerous should not have arrived in Genoa.” he said.

“They should have been stopped by the Serbian officials. We were aware that this game had a risk factor but a behaviour of such aggressiveness we had not experienced for some time. From the traditional channels of communication with the Serbian police, we had not been given any signs of the degree of danger of these fans.”

“We, through experience, had arranged an adequate security, but we would have never imagined such a high level of aggressiveness. But there was no-one here from the Serbian police.”

Azzurri coach Cesare Prandelli couldn’t hide his disappointment over the evening’s proceedings. The former Viola man is in no doubt that those involved done their utmost to achieve the postponement of the fixture.

“We are extremely sad and very bitter,” he said. “There were so many children that wanted to watch a show and were not able to do so.

“I’ve never experienced anything like this.The (Serbian) players have been assaulted by their own fans in their bus.”

“Their goalkeeper (Vladimir Stojkovic) was in our changing room, he was trembling and had fear not only about tonight but also in view of returning home.”

“The ultra fans seemed organised. It appeared as though they would have done everything possible to make sure the game was not played. According to the Serbian players, that was their aim.”

UEFA will now await for a report and it looks highly inevitable that they will open a full investigation.