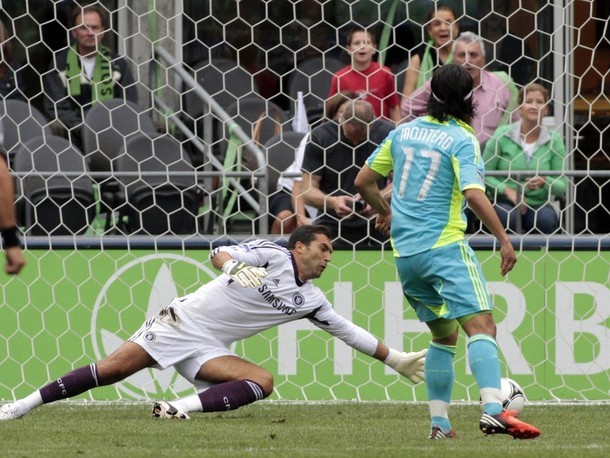 Deep in the furthest Pacific Northwest reaches of Major League Soccer, a fully-engaged Seattle Sounders helped kick off Chelsea’s pre-season tour of the United States. Blue versus a light sea foam-ish green was the scene, a decidedly mild color combination on the field to clash nicely with the incredibly energetic vibe in the stands… but that’s nothing new in Seattle.

For Di Matteo’s Blues, this was the first official match since their gritty Champions League victory two months ago, a tournament triumph that (even now) continues to defy soccer’s most basic laws of normalcy and order… but I guess that’s why we don’t crown the favorites before we play the games. Nevertheless, all that craziness now seems solidly in the past, and, interestingly enough, no one seems to have embraced that fact faster than the tournament champions themselves.

Seeing Chelsea make their return to the field with a roster full of young, “on the precipice” players, particularly ones with creative attacking flair, seems to signify the dawning of a new team blueprint for Di Matteo and company, one which has quickly shelved recent Champions League bliss in favor of whole-hearted focus on rebuilding a new club future. With Eden Hazard slicing through defensive midfield fronts with deft, speedy touches, and Romelu Lukaku powerfully shunning his adversaries like John Terry in a hostile courtroom, Chelsea’s youth look set to provide potent attacking flexibility. Letting their band of Euro 2012 participants (Cole, Torres, Czech, etc.) rest up after a summer of National team toil gave as a great look into Roman’s crystal ball, and by all indications a heavy emphasis on inventive offensive prowess seems very much on the rise.

On the defensive side of the ball, however, both teams struggled mightily. With numerous breaks in coverage and way too many errant passes in unacceptably dangerous areas (Montero’s first goal came on an intercepted pass on the edge of the 18), there was more than enough opportunity for players to find the back of the net. At a 4-2 final score in Chelsea’s favor, the match already qualifies as an offensive surge, but, amazingly, all those goals came in the first half of the game. As good as the scoring effort was at Century Link Field, the defending was equally atrocious… both teams could have come away with many more, which says a whole lot about the quality of the back lines.

One relatively unexpected surprise was Fredy Montero’s impressive performance throughout the contest. It was surprising, not because he hasn’t previously shown the ability to score fantastic goals, but more so because he has struggled to hit his stride this season. A highly talented, technically-gifted forward, Montero’s MLS career has been characterized by moments of jaw-dropping brilliance and puzzling disappearing acts. Inconsistency has certainly plagued him throughout his American career, but now that he’s scored in the Sounders’ last MLS contest (vs. New York Red Bulls) and netted a pair against the defending CL champions (well their younger contingent at least) it looks like he may be putting together a run of good form right as the MLS hits the latter stages of the season. Obviously a good sign for Seattle, as Montero has true game-changing potential.

I’m also pretty confident Seattle fans weren’t the only ones noticing Montero’s potential, there has always been a bit of side-chatter centered around Fredy’s EPL prospects… and I’d be really surprised if that didn’t increase after this latest performance. He scored two pin point goals (one with his right and one with his left) against a couple players Chelsea relied pretty heavily on last season in David Luiz and Branislav Ivanovic. Those are EPL-tested players without a doubt.

His impressive performance against Chelsea reveals a simple truth, the Colombian national can flat out play, but the most encouraging thing from this exhibition might be the not so subtle drive he exuded in his post-game interview. He made some pretty direct comments after the match, basically saying an eventual move to the EPL is not just a possibility, but a definite part of his personal plan. There is a genuine desire to grow as player in his statements, but what he has to realize is that getting the opportunity to achieve his personal ends has a lot to do with helping the Sounders achieve their team ends first (namely winning the franchise’s first league title). The fate of team and player are ever so neatly bound, and only time will tell whether a moment of brilliance or a disappearing act will ultimately determine the course of both… but hopefully Fredy’s finally ready to lead the charge.