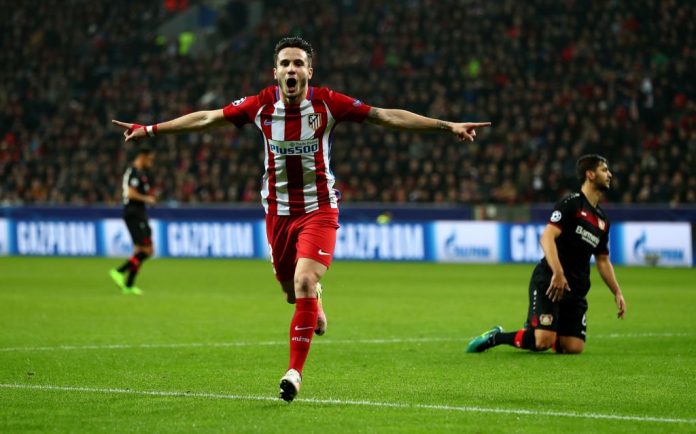 Atletico Madrid have more or less booked their place in the quarter finals of the Champions League after winning 4-2 against Bayer Leverkusen away from home on Tuesday night.

The victory puts them in a strong position to go through, and Bayer would have to produce something extraordinary to turn the tide in their favour in the second leg.

Saul Niguez scored another breathtaking goal to put the visitors in front. The Spaniard is making a habit of scoring spectacular goals in the Champions League, having scored a stunner last season in the semi-final against Bayern Munich.

It was a typical left wingers’ goal from the right hand side, and instantly reminds one of Arjen Robben. Hugging down the touchline, he beats the defender for pace, quickly rushes into the box, cuts inside and curls it into the far corner. Emphatic finish.

Saul has been heavily linked with a move to Manchester United in the summer. Jose Mourinho is reportedly plotting a move to sign the Spaniard and Griezmann (who also scored on Tuesday night) for a staggering £145m transfer fee.

United need to break the bank for Saul and Griezman

@UnitedStandMUFC instead Bakayoko I would love to see Saul Niguez at United!!!! He is such a amazing talent!!!!!!

Niguez and Greizmann for Atletico. Love them both at United

Forget greiz…Saul is the man to get for United