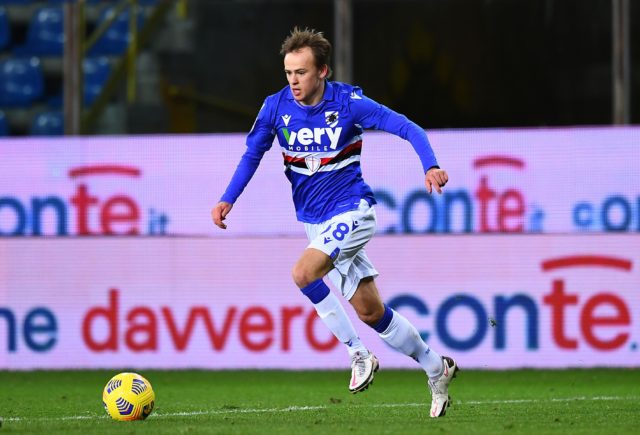 According to reports from La Repubblica (h/t Sport Witness), Spurs are serious about signing the 20-year-old who has dazzled in Serie A this term.

Spurs are apparently ‘crazy’ about the player and have taken initial steps about signing him. Serie A giants Juventus are also interested while other Premier League teams and clubs from Bundesliga could join the race for his signature.

The Italian club snapped up the Denmark international from Nordsjaelland in September 2020 for a fee of around £5.8 million, but his price has gone up, with reports from Italy claiming he is now worth around £18m.

During the January window, reports emerged that West Ham United were also interested in signing the youngster who has scored two goals and provided four assists so far.

Spurs wanted to sign him in January and loan him back to the Genoa club, an idea that wasn’t entertained. Sampdoria will only be interested in selling him directly.

Spurs do have a wealth of options in their attacking midfield areas, but the situation could change in the summer.

Gareth Bale, who joined from Real Madrid on loan, has failed to make an impact and the chances are high that Spurs won’t sign him permanently.

Similarly, Dele Alli is facing an uncertain future at the club, while the likes of Lucas Moura and Erik Lamela could be offloaded as well.

A lot of Tottenham’s transfer activity will also depend on where they finish at the end of the season. If they can get themselves back in the Champions League next season, Jose Mourinho might look for more experienced and well-established players, instead of Damsgaard.