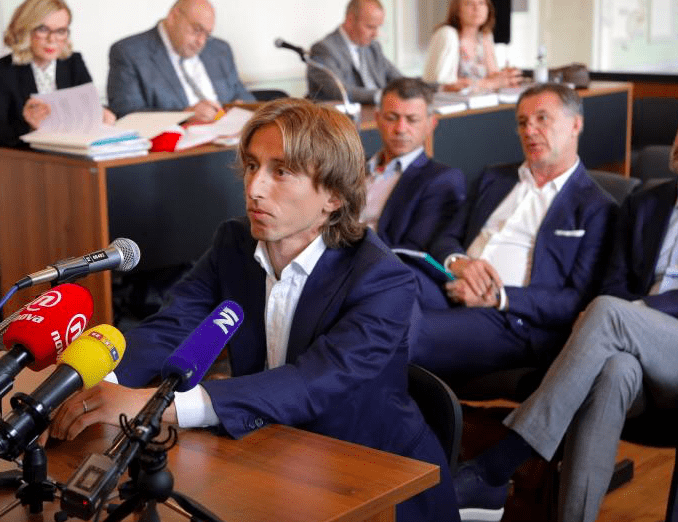 Real Madrid’s talismanic midfielder Luka Modric is being investigated on suspicion of providing false testimony in a criminal trial, according to Croatia’s state attorney office.

Modric was asked to testify last week at the trial of a tax official and three former executives from Croatian football club Dinamo Zagreb, including its former chief executive, the infamous Zdravko Mamic.

Modric, who played for Zagreb before moving to Tottenham Hotspur in 2008, testified as a witness at the trial on charges that Dinamo officials engaged in corruption that reportedly cost Dinamo Zagreb more than €15m and the state €1.5m. Mamic, his brother Zoran Mamic, and two others are accused of corruption that reportedly cost Dinamo Zagreb a lot of money. They are said to have embezzled cash through phoney deals where they took a cut from the sales of players.

“The witness falsely said that on July 10, 2004, the date when he signed his first professional contract, he also signed an annexe on the basis of which he had acquired a right to a 50:50 share in transfer fees,” the state attorney said in a statement.

The attorney added that Modric falsely claimed that he “had signed such an annexe every time he extended his contract”.

The state attorney’s office claims that two years back, the former Tottenham Hotspur midfielder attested to anti-corruption investigators that he had signed the “annexe” to his contract at a later juncture, when in fact, he had already joined a foreign club (Tottenham) by then.

The Croatia captain apparently “forgot” other details as well, including the year of his first senior international appearance. Modric is said to have looked visibly uncomfortable during his trial, one that has gained massive attention in Croatia and is under considerable limelight considering Mamic is an influential and infamous personality.

If found guilty of perjury, Luka Modric could face between six months and five years in prison.

If Modrić’s perjory is proven, he could be – well, according to penal system, anyway – facing a six months to five year prison sentence.

Liverpool’s Dejan Lovren was also supposed to testify at the trial, but a recess was called after “Mamic publicly fired his lawyers in the courtroom and vowed to represent himself”. The trial will now continue in September.