Premier League side Liverpool are set to miss out on Sevilla’s dazzling midfielder Ivan Rakitic in the coming summer after the Croatian gathered interest from Spanish giants Real Madrid, claims talksport.

The 26 year old has been in impeccable form this season, netting 11 goals and grabbing 10 assists for Sevilla in the Andalusian club’s quest for a Champions League berth next season.

Rakitic has just one year left in his contract, and we had earlier reported in January that both Manchester United and Liverpool were asked to pay €40m to secure his services.

However according to Spanish daily Marca, Real Madrid have expressed their desire to sign Rakitic as Cadena Cope radio have also confirmed the story. 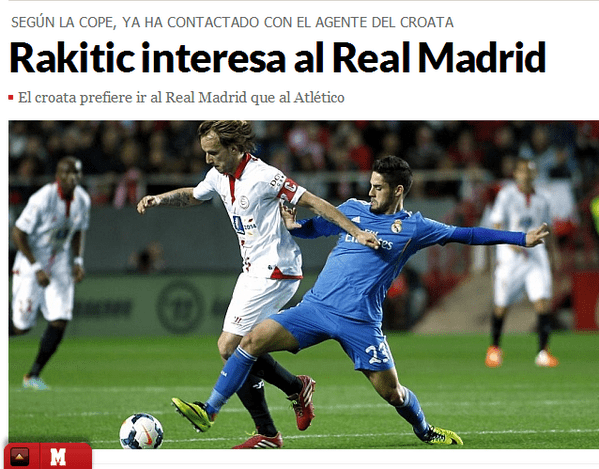 Real have also spoken to the player’s agent and brother regarding a possible move in the coming summer. Sevilla have tried their best to offer Rakitic a contract extensionbut talks seem to have stalled with nothing been agreed.

However, adding to the twist on the story, Football Direct News claim Atletico Madrid have had a verbal agreement with Rakitic, adding to the intense speculation regarding the current situation. Atletico are currently atop the La Liga standings and look well placed to win their first league title since 1996, breaking Barcelona and Real’s hegemony in current years.

Liverpool will continue to pursue their interest on the central attacking midfielder but is either of above stories turn out to be true, the Reds will yet again lose out on a quality addition in their squad.