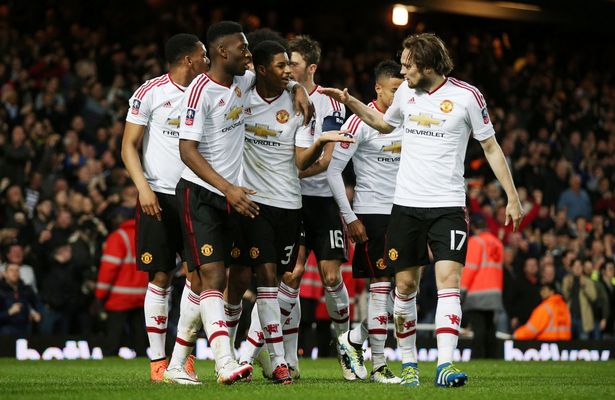 Manchester United progressed to the semi-finals of the FA Cup after beating West Ham United 2-1 in the quarter final replay at Upton park.

Louis van Gaal’s struggling United side engineered a result when they needed the most in the final FA Cup game at West Ham’s historic ground. The Hammers will ply their trade in the Olympic Stadium from next season.

Coming back to the game, United did look like the stronger side of the two and produced a performance that even though lacked virtuosity, was not short on industry. Captain Wayne Rooney, who was named in the substitutes bench after missing two months worth of football, looked on as the young United front three of Anthony Martial, Jesse Lingard and Marcus Rashford tried toppling an impressive and resilient West Ham defence.

The first half ended goalless with nothing going on either side’s way. But nine minutes into the second half it was Rashford who put his side ahead after a neat finish inside the box. The 18-year-old Mancunian collected a ball from Martial then curled it magnificently into the top corner past West Ham keeper Darren Randolph. This was Rashford’s sixth goal in 11 games this season for United.

Shortly afterwards, Marouane Fellaini – a player under constant scrutiny from fans and media alike- added a second to give United a two goal cushion. The big Belgian bundled in a cross from Martial in the 67th minute ending his dismal run of 12 games without scoring. Initially, Van Gaal had invoked the indignation of United fans by naming Fellaini in the starting XI but the former Everton man proved his critics wrong with a decent performance against a decent side away from home.

David de Gea produced yet another spectacular display of goalkeeping throughout the game, most notably from a Michail Antonio effort which was destined to end at the back of the net. But West Ham striker Andy Carroll, who was winning absolutely everything in air, assisted a beautiful goal scored by defender James Tomkins denying De Gea his clean sheet just 11 minutes off stoppage time.

Wayne Rooney made a cameo appearance late in the game replacing goalscorer Marcus Rashford but did not see much of the ball to have any significant impact on the game. United will play Everton in the semi-final at Wembley on the 23rd of April.

How Does This Affect Van Gaal’s Future?

Louis van Gaal has developed an uncanny knack for getting results when he needs them the most. There’s a belief among everyone associated with the club that the United board will not jump the gun on Van Gaal unless and until there is absolutely no chance of winning a trophy and it becomes mathematically impossible to finish in the top four.

Speaking in the aftermath of United’s victory at Upton Park, the Dutchman suggested that winning the FA Cup will have no bearing on his future .

“I said I wanted a title and I am very happy but it is very important for the club.”

More often than not, Van Gaal has been some sort of an anarchist with his tactics. His tactical rigidity, coupled with his inordinate pragmatism, have produced a very dire standard of football over the last two seasons. Whether United win the FA Cup or qualify for next season’s Champions League, the underlying truth will always be that the football isn’t beautiful.

Taking the financial aspect into consideration, United just cannot afford to lose out yet another year without qualifying for the Champions League. According to the Independent, the £75m-a-year, ten-year kit deal that United have with sporting giants Adidas, will be reduced to 30% – meaning a drop to £52.5m a year – until they qualify for the competition again. United’s disastrous season under former manager David Moyes, followed by the absence of European football last season, has cost United around £50 million. So the pressure is steadily stacking up against Van Gaal from a purely financial point of view.

But with his side 5th on the Premier League table, four points behind neighbours Manchester City, and just 180 minutes away from delivering a trophy, it seems that the Dutchman has bought himself an extra few days as the manager of Manchester United.