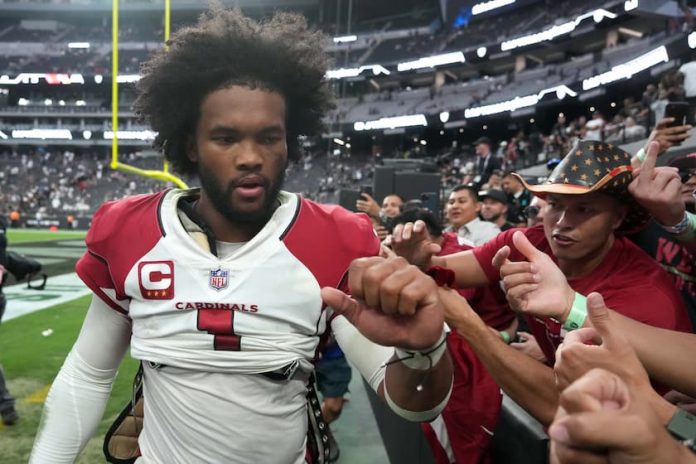 Las Vegas Police have reported that they are investigating an incident in which QB Kyler Murray was hit in the face by a fan during celebrations.

The incident happened following a stunning comeback from the Arizona Cardinals. The Cardinals were 20-0 down at halftime and went on to level up the game in the fourth quarter and complete the comeback in overtime.

Once the full-time whistle blew the Cardinals players were ecstatic and went to celebrate with fans behind one of the endzones.

A video has emerged which shows a suspected raiders fan appearing to smack Kyler Murray whilst he is high fiving fans. Murray went on to confront the group of fans, but teammates got in the way to help deescalate the situation.

Police in Las Vegas said Monday they’re investigating allegations that a fan in the stands struck Kyler Murray amid celebrations of Arizona’s win in OT.

A Las Vegas police spokesmen confirmed to the press that a battery charge had been filed and that this complaint involved “a spectator at the stadium (who) struck a professional football player.” According to reports, there is still an open inquiry, and no suspect has been named.

Cardinals’ spokesman Mark Dalton declined to make any comments on the matter on Monday.

Murray was the main influence in the Cardinals comeback after leading them to two touchdowns and two 2-point conversions in the final 8 minutes and 13 seconds of regulation time to force overtime. This was the Cardinals first victory since Murray agreed to a $230.5 million, five-year contract extension.